Elise has been attending about 5 lessons of Kindermusik so far. I had a hunch she’d like it. We missed Lesson #3 because I had an exam and my husband who promised to bring her ended up not bringing her there. We’ll also be missing out on two upcoming lessons when we fly to Korea and it’s a pity because the curriculum runs concurrently for the classes, so while there are make-up classes available, they are only suitable if you can’t make it on the day itself.

Each term (12 lessons) is split into 3 themes, 4 lessons per theme.

This was taken during the 3rd lesson of Playtime. At the start of each concept, a take-home kit consisting of related materials will be given out for parents to continue the concepts at home. It usually includes an instrument, a board book and a CD. The songs sang in the lessons relate to the theme. There were songs like Pop! Goes the Weasel for Playtime.

There is a structure to lessons. After singing the Hello song, there’s some circle time where we do some actions with the children to instill some concepts in them. For example, last week, they learnt about inhibitory control . Inhibitory control is simply the process which allows an individual to restrict their natural impulses or behaviour e.g. freezing on hearing the word “stop”. To emphasize this, they waved, rolled, clapped and waved their egg shakers to the music and stopped when the music stopped.

Whenever a new toy or book is introduced, the children all rush up to the front for a closer look. Sometimes, teacher Natasha hides the toy or box behind her for them to focus on the current object in her hand but they just go around her to hunt for it. It’s also interesting to observe that at this age, even though each segment is kept short in view of the limited attention span that children have, their natural impulses are still dominant (I do whatever I want to do) so you see kids lying down on the floor “swimming”, running about or hiding in corners during lesson time.

For most part, they join in when there’s something new to see or do. A positive improvement I observed from Elise over the course of a few lessons is that while she used to be reluctant in returning the toys after the exercise was over (she would yell if I tried to pry it from her grip so she held on to it even after the next activity commenced), she now returns the toys, waves bye to them and claps. She was the only one who wouldn’t return the toys and now she’s still one of the last to return toys but it’s a visible difference. 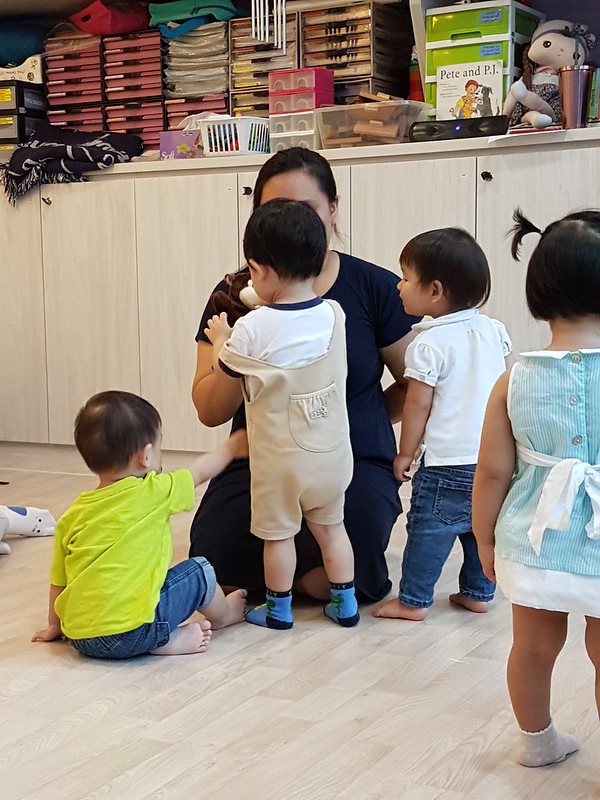 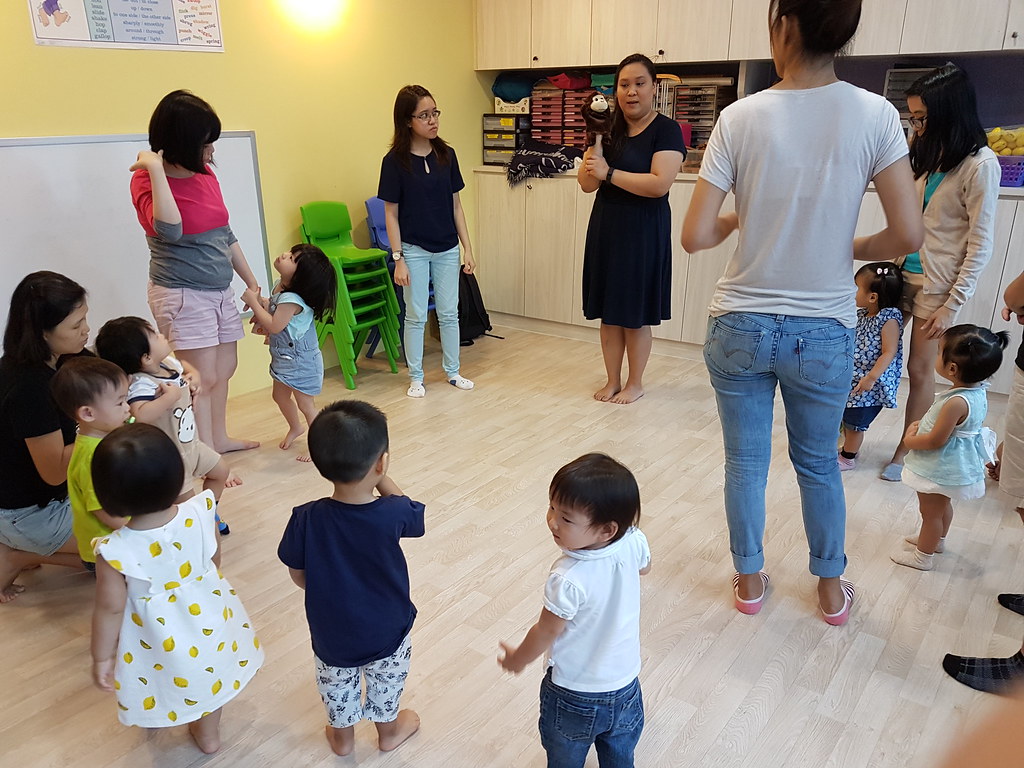 What I like about teacher Natasha is that she doesn’t use harsh voices on the children even when they don’t behave very well. Many times, they go right up to her face when she’s trying to read a book to the class but she entertains them. That’s not to say she’s a pushover as she controls them in different ways. When handing out instruments for a new activity, she tells the children that they will only receive them if they sit down and bypasses those who are standing up, jumping to get her attention so they learn to follow instructions. 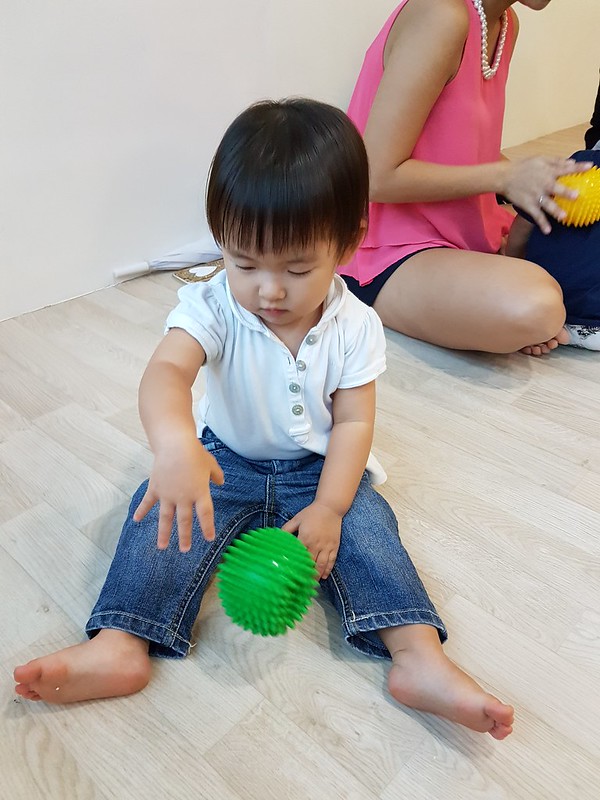 Children love scarves, veils and pieces of cloth where they can hide behind to play peek-a-boo. It helps with sensory exploration. 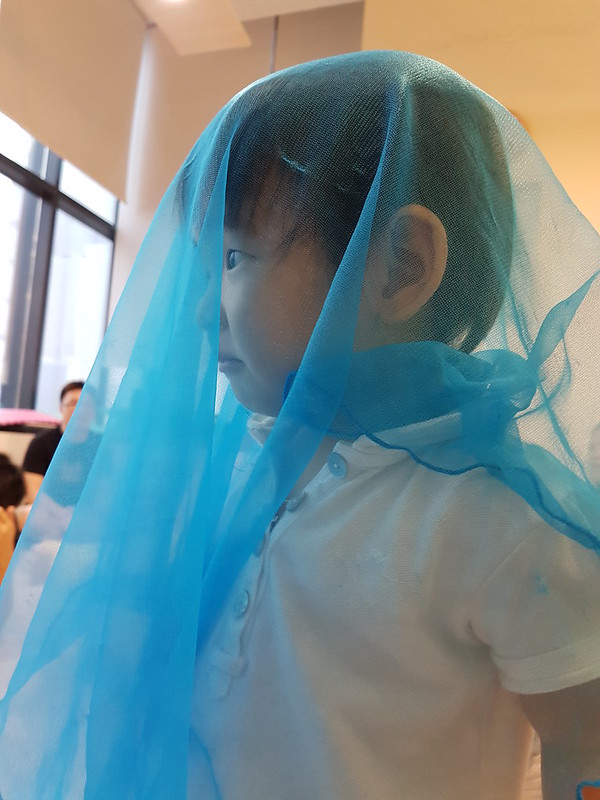 We’re on the theme of Yum! so the lessons revolve around food. Flashcards with commonly seen vegetables were shown to the children, after which they got to choose their favourite vegetables to play with. 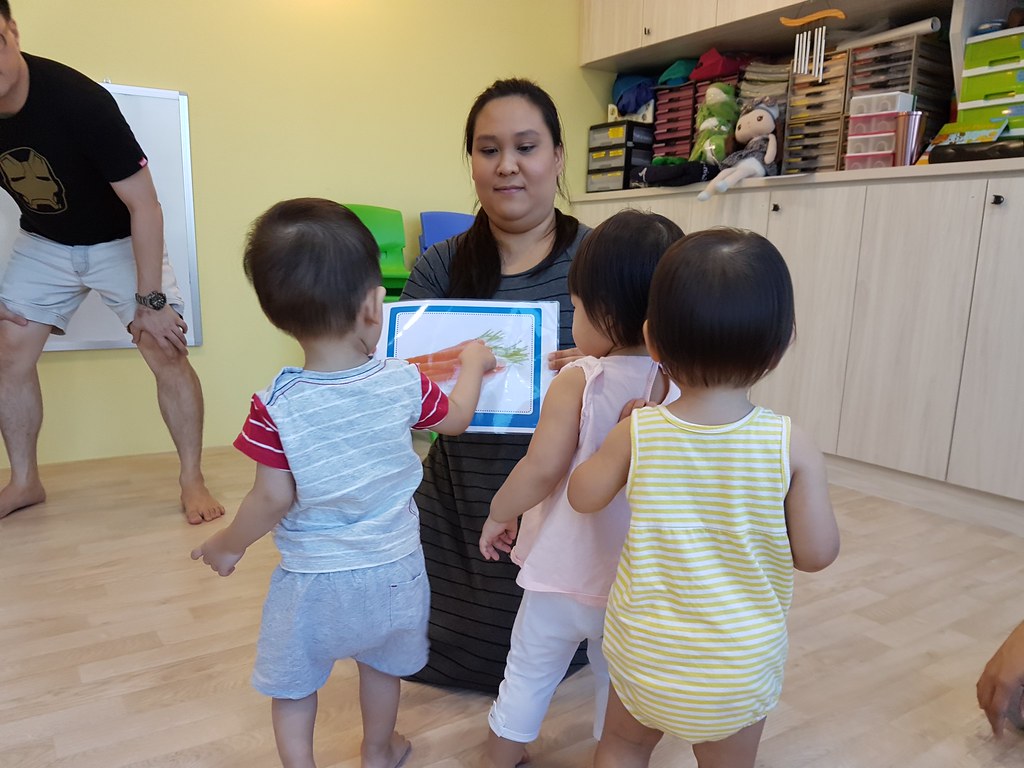 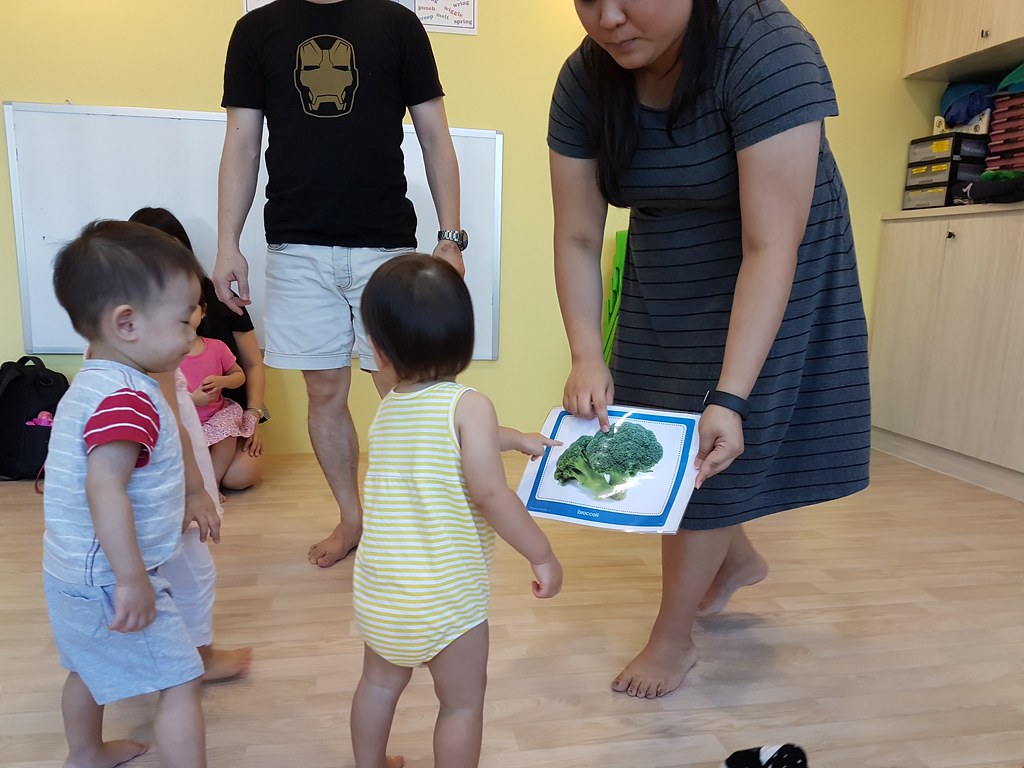 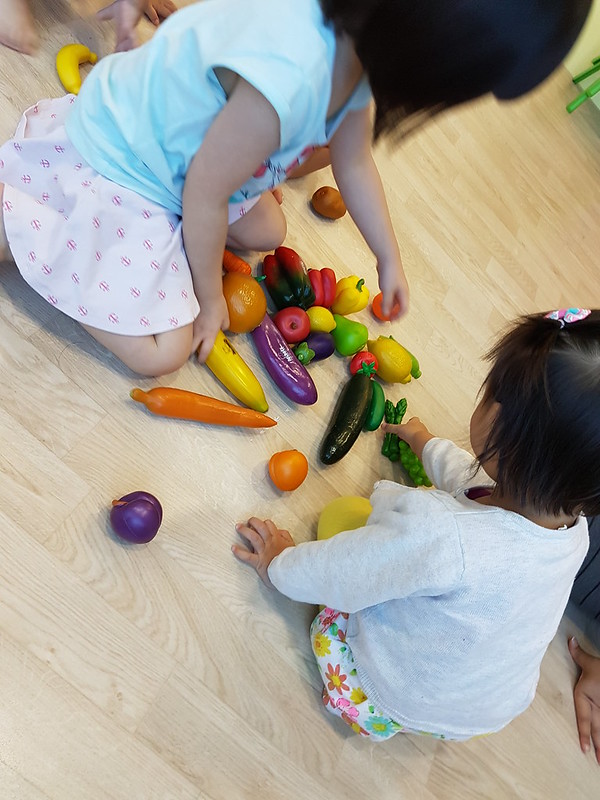 These colourful plush balls with bells inside were used in place of “apples”. 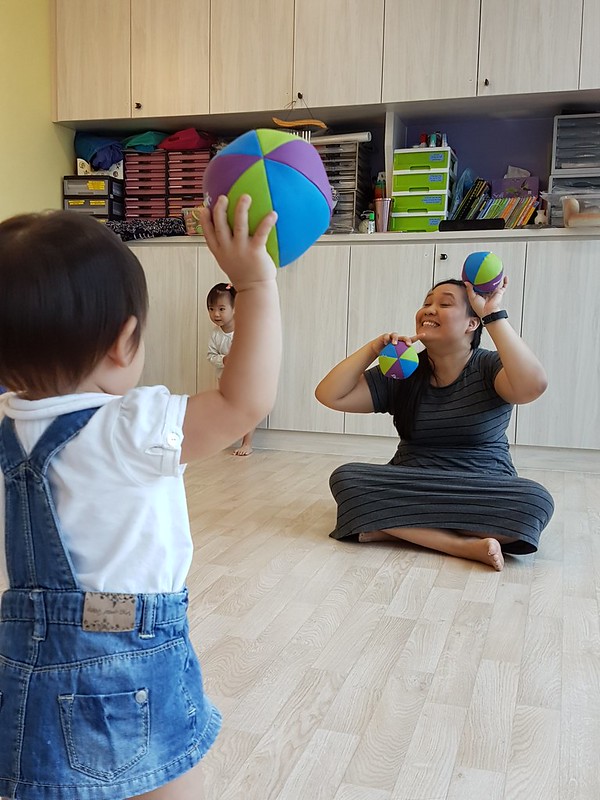 The children chose shakers resembling buns, croissants and bread. Elise tried biting into it but they were made of hard plastic. She also tried to feed me with it and almost knocked out my front teeth. -_- Her friend in front is trying to get a bite of her croissant! My impression of the class so far has been positive as Elise has been proactively participating in the songs. She hasn’t yet attended playgroup so this is the closest she gets to learning about being in a structured environment and socialising with peers.

Also, musical experiences in childhood have been found to accelerate brain development and assist in increasing overall literacy. Dancing also helps them work on their motor skills and express themselves. I find her speaking skills rather limited at this time – her spoken vocabulary hasn’t exceeded 20 words and she chooses to babble to us in her own language with gestures. It’d be great if music helps her speak more. 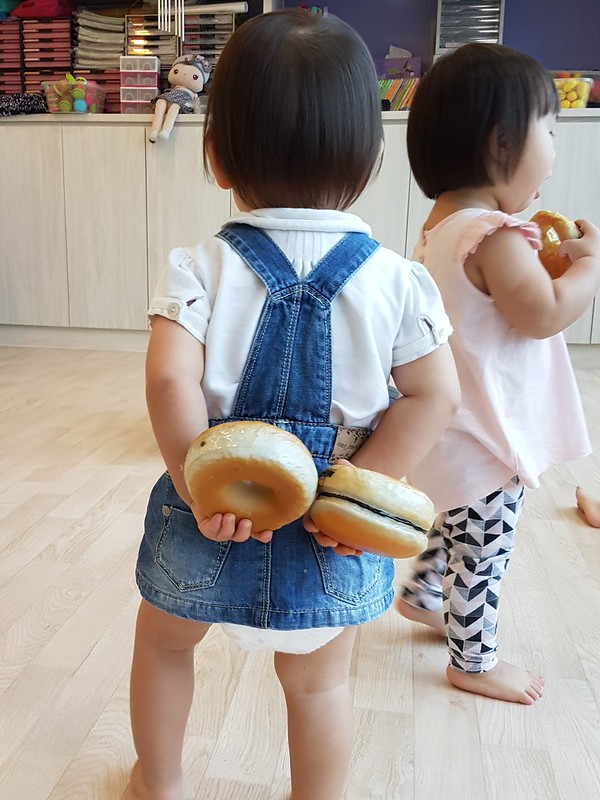 The food-related songs sung include Pancake Day and Rise, Sugar, Rise which apart from introducing actions like mixing, whisking, flipping (pancakes), rising, incorporate vocal techniques to familiarise them with music e.g. Pancake Day uses glissando, a continuous slide upwards or downwards between two notes. I can’t find the song here on YouTube due to strict copyright issues, so maybe you can enrol your kid for trial lessons to see if your child likes it.

Near the end, there is about 3 minutes of quiet time where the room is darkened and soothing music is played for the toddlers to calm their mood down. Sometimes they lie down and rest, have a water break but other times they just roam around the room. Teacher Natasha also recaps the activities covered during the lesson and their purpose for us to practise at home.

** This is Part 2 of an ongoing review of Kindermusik, The Musical Voyage, brought to you by TodayGotClass and The Musical Voyage.
Read Part 1 here. They are currently having a very attractive promotion of S$24 for 4 trial lessons! 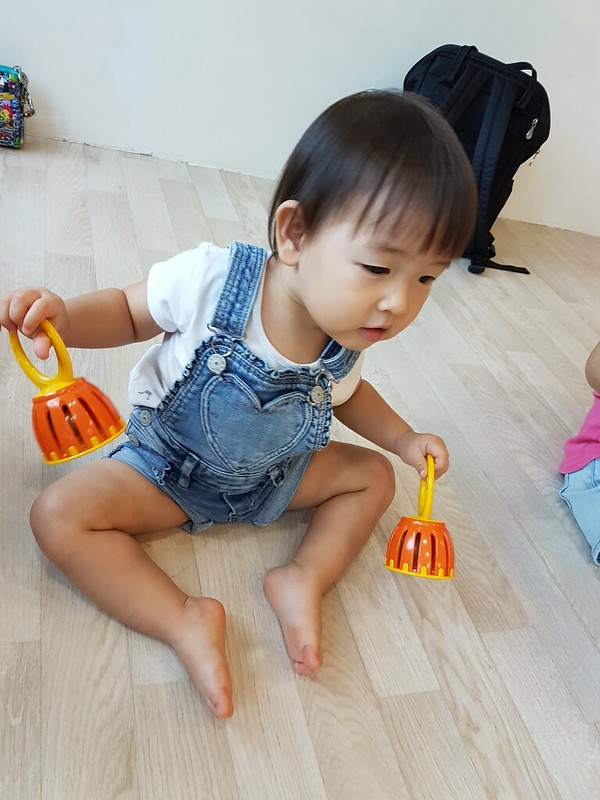 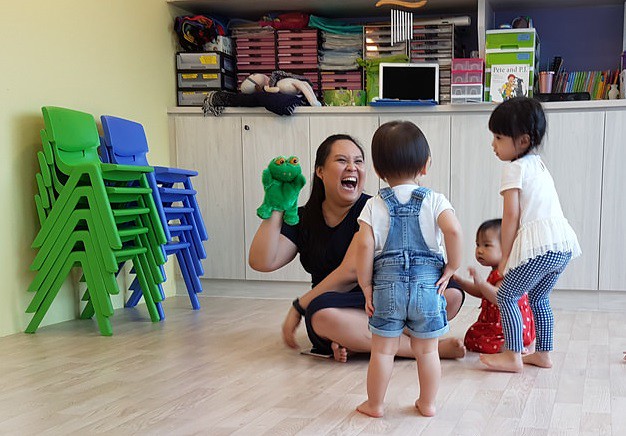 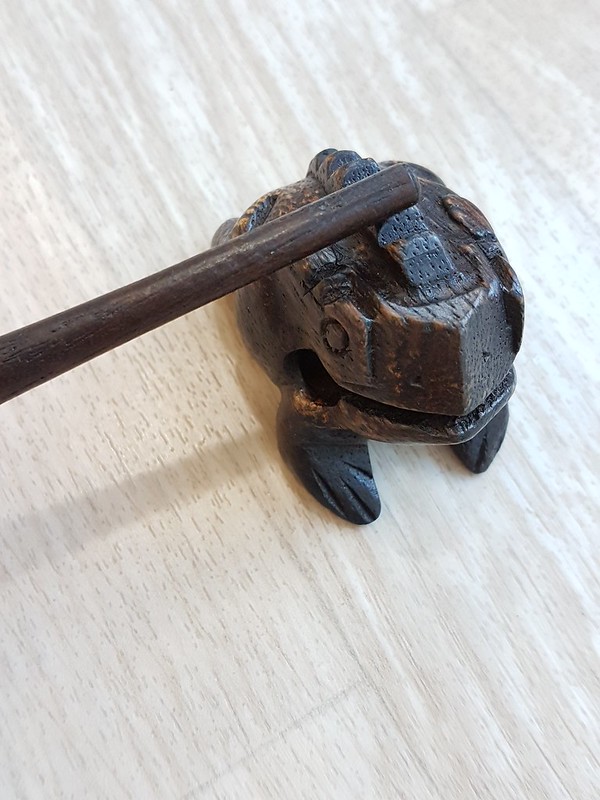 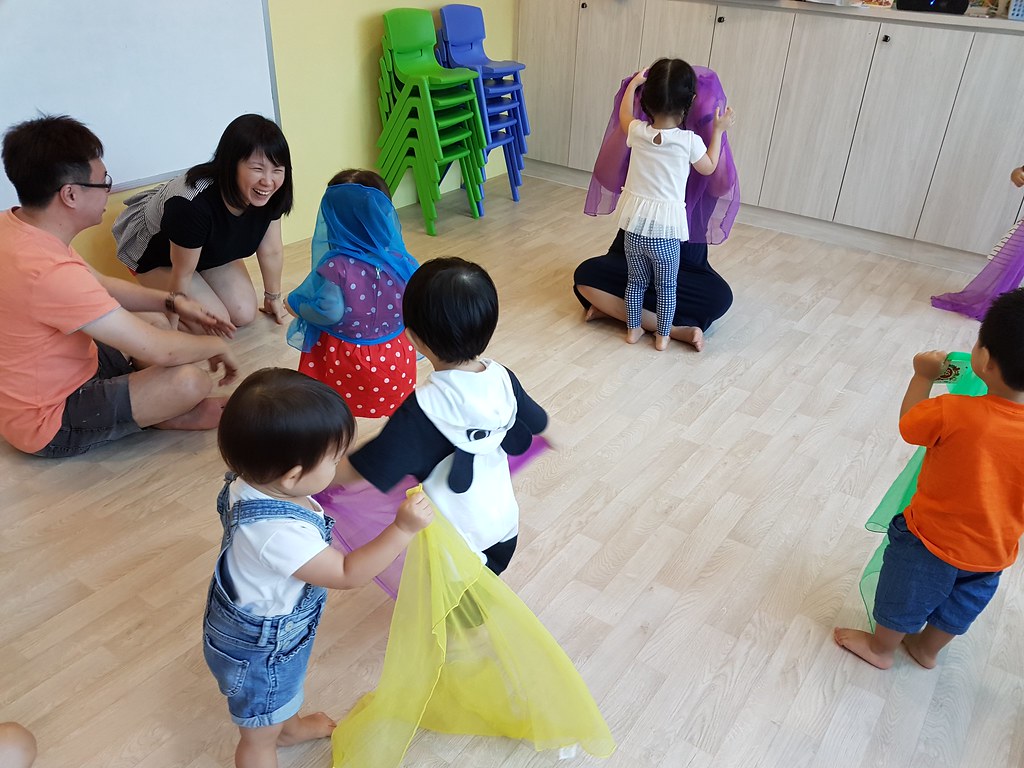 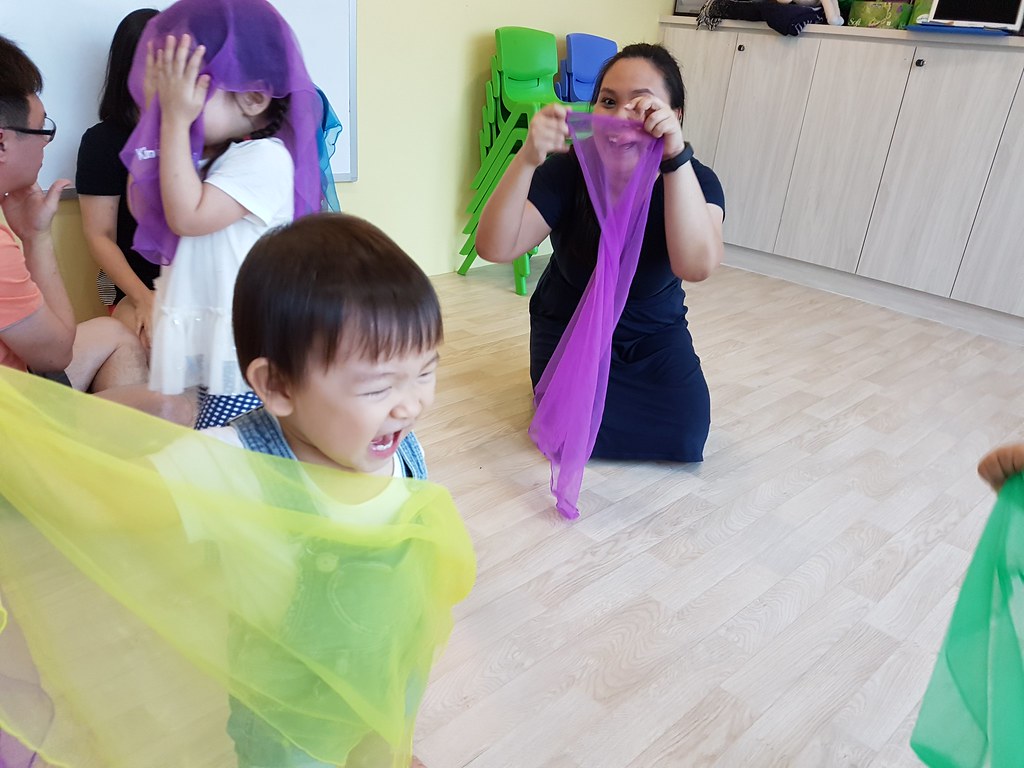