Elise has had her prosthetic eye in for slightly less than a year. After her follow-up in January, we were told that the tissue below her prosthetic eye had eroded due to abrasion and insufficient moisture. I was supposed to put in eyedrops for her as many times a day as possible. She would run away from me whenever I tried to touch her eye and I failed to fulfil this necessary criteria.

It wasn’t a wound that would heal by itself, thus Dr Ganga suggested that an operation be done to cover up the gap. He warned that there might be a need to do a skin graft off her back if the donor tissue wasn’t enough to cover the gap. I agreed almost immediately because the hole would only continue getting larger with repeated contact from movement. The boring name for the procedure Elise underwent is “Scleral Patch Graft for Exposed Orbital Implant”. Don’t Google that if you’re squeamish.

The operation went well and the donor tissue was enough to patch up the 5mm gap in her eye socket. We spent the next two nights in a 8-bedder ward. She vomited and ran a fever, yet she refused to take Paracetamol orally.  The Paracetamol was also to help her combat the pain from the operation. Eventually, the nurses gave her Paracetamol via intravenous drip. -_-

The worst part was when the nurses tried to change her eye dressing. It was a necessary yet traumatic experience for her as the wound was fresh and her entire eyelid was stitched shut and swollen. To prevent her from struggling, we swaddled her with a bedsheet. My dad held her legs down. A nurse held her head down while another tried to wipe her eyelid and apply medicine.

“No, no, no, no! Go away! Go away! Help! 엄마! 公公！No, no, go away! 아빠!”, she tried all she could to get herself out of that situation by pleading with us to stop, calling for each of us to save her. She gripped my hand for support. The hand which failed to rescue her from fear. It was impossible to adhere the tape for the eye shield onto Elise’s face which was dripping with perspiration and tears. 🙁 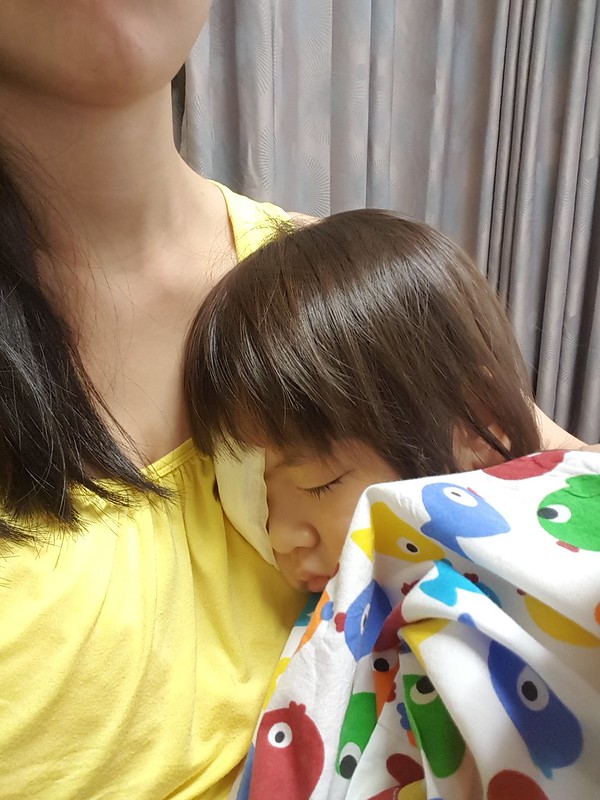 For about 10 days after the operation, her eyelid remained stitched shut to aid wound healing. At its worst state, it looked like someone socked her in the eye. It was all red and puffy like a goldfish’s. For a breather, we brought her down to the playground opposite our house. She enjoyed herself but there were a group of children aged about 8 to 10 years who were extremely curious about her appearance and started gossiping. They even went straight up to scrutinise her eye. URGHHHH. Even after I told them she’d injured her eye.

She felt rather self-conscious and down about it. My dad decided that there was nothing to be ashamed or embarrassed about and that night, we brought her down for a walk. Another group of children. This time, they accepted the explanation, included her in their games and she healed a little inside, only to get it broken the next evening when she spotted a friend she frequently hangs out with. She called out for her friend, who saw that her eye wasn’t quite the same and hid behind her helper. Elise tried to engage her, showing a toy she had, but that failed too. I couldn’t take it and grabbed her away to play with something else. Secondhand heartbreak. 🙁

Fun fact: Some adults can be idiots. At the mall, a stranger asked us, “Why is her eye like that?”, only to be shushed by his female counterpart who had about a hundred times more EQ than him. Some people think through their asses and talk without a filter. I snapped back, “关你屁事！(lit. None of your business!)“ but he was too far gone. At the bus interchange, a helpful uncle chimed in with his useless advice, “There’s a temple near Sheng Shiong, you should bring her there.” By that time, my social meter was reduced to negative and whatever I replied would have possibly sparked a physical fight.

Two days ago, she had her stitches removed. It still looks like she has her eye closed because the swell has yet to subside and there’s discharge which constantly leaks from the wound and has to be cleaned. The wound needs about 6 weeks to heal so we can’t slot in her fake eye just yet. It’s a conformer like what she had last year. Post-op care has been a struggle (holding down her limbs, holding her head in place, cleaning in between her tightly clamped eyelid, prying open the eyelid to drip in medicine). Just this evening, her conformer popped out as I was cleaning it and we decided to leave it until tomorrow morning.

At her teacher’s encouragement, we sent her back to school today! Her classmates are still too young to care about appearance. It’ll be a while before she looks like this again, but soon! The sad lesson is that how you look determines how you are treated in the world. 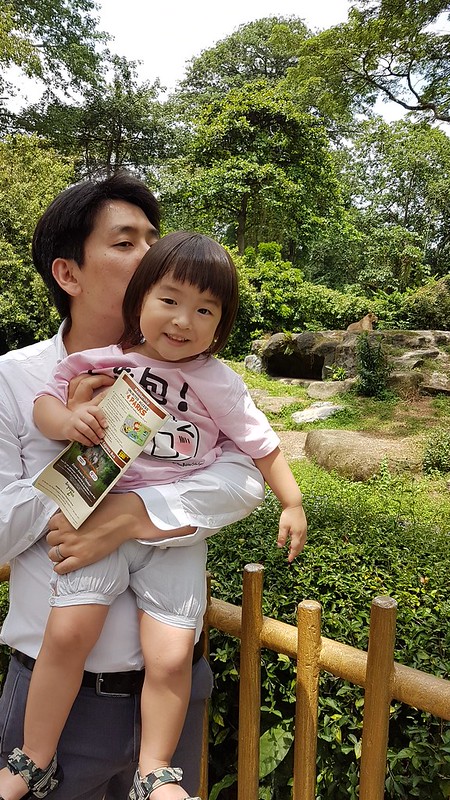