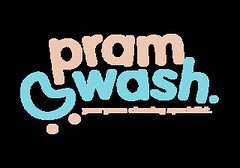 PramWash is Singapore’s first professional stroller cleaning service which handles car seats, bassinets, baby carriers, playpens and rockers as well. They can clean most baby gear and toys, so you can ask them if you’re unsure.

Baby strollers and car seats get dirtied quickly, from shoe prints when you take baby in and out, food crumbs, milk spit-up, vomit and the dreaded poo-namis. How often do you clean your stroller? Do you clean it after every use or when there are visible stains? Do you do a quick vacuum or remove the entire fabric to wash? Even if there are no visible stains, there will be bits of dirt nestled in the grooves of the fabric.

PramWash takes the tedious task of cleaning your stroller off your hands. The products they use to clean items are non-toxic, chemical-free and entirely safe for children. The type of service you should select depends on the frequency of use and upkeep of your stroller/car seat.

All packages include vacuuming, frame wipe, steam cleaning and sanitising. Steam cleaning under high temperature ensures that bed bugs lurking in deep corners will be killed off. 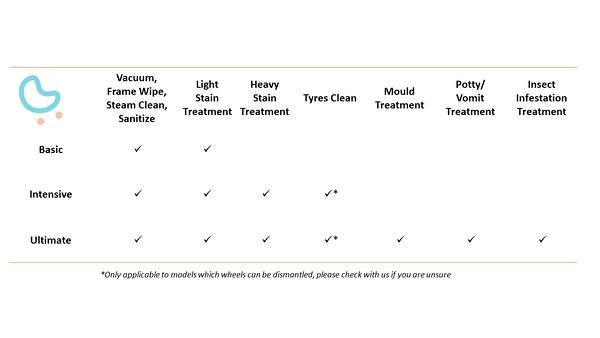 Other than the main cleaning service, fringe services include retail pop-up stations and the newly launched house call service, where multiple strollers can be cleaned at a single location, on-the-spot.

Placing an order via the website is easy. Once payment has been made, an email confirmation will be sent. You can drop off your items at their customer space which is opened 24/7 or opt for pick-up via courier. I chose the second option because it was more convenient for me. 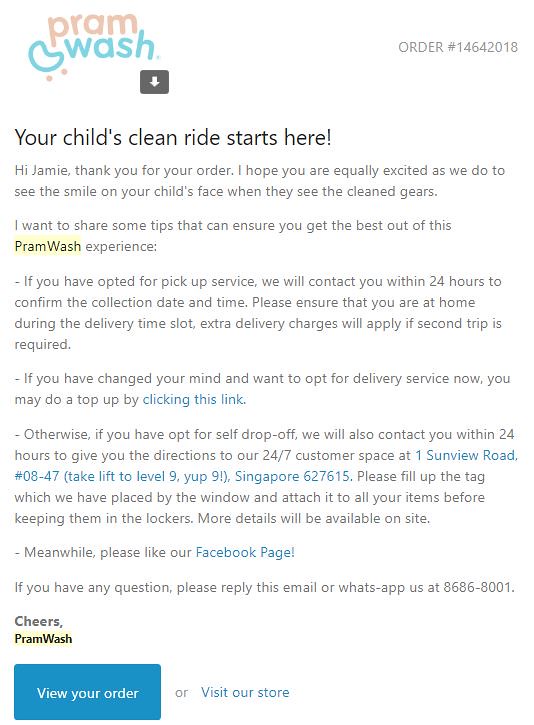 These are the 3 items that I sent for cleaning. 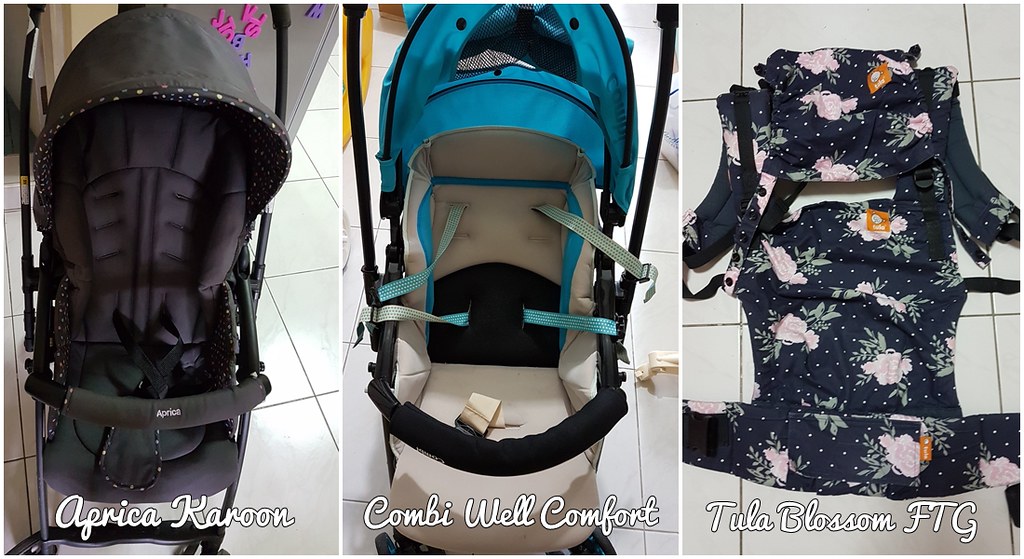 This is our very first stroller that we bought for Elise in 2015. This stroller is well used because it’s light and basic. Elise has had many happy memories going around the neighbourhood in it. It doubles up as a trolley to transport our groceries home from the supermarket. I’ve tried to take it apart once but the buttons were too securely fastened so I gave up halfway and hosed down the fabric. My husband sprays the wheels with water when it gets dirty. I sent this stroller because it was the oldest and dirtiest.

The Aprica Karoon had visible mould stains so I chose the Ultimate treatment. These photos are taken by the PramWash team. They took apart the stroller and steam cleaned the chassis, did stain and mould treatment and sanitised the fabric. Spot the small leaves in the 3rd photo! The leaves were trapped in between the seat and the chassis. 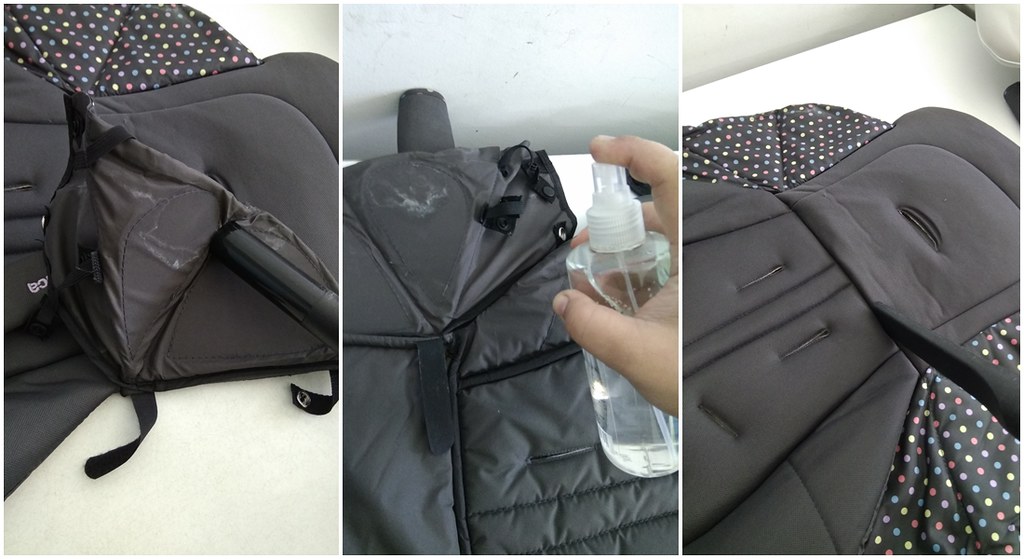 How did it turn out? Before I sent the stroller in, I took photos of areas with noticeable stains. After receiving the serviced strollers, I checked the same spots for differences. The stroller was sent back with the straps in their original position. I didn’t realise the shoulder straps weren’t threaded through when I sent it in. 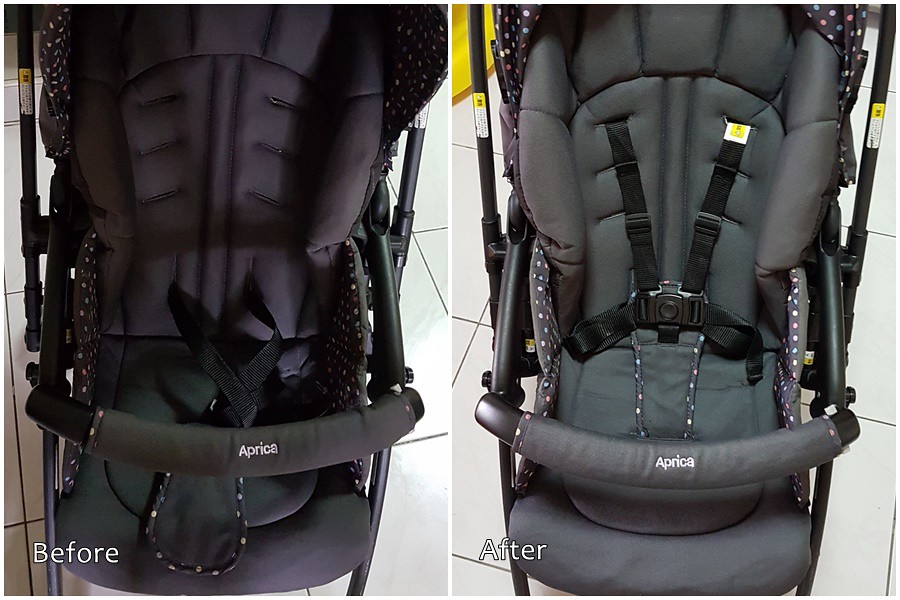 The largest mould stain was on the right exterior of the seat. Most of the stain was removed, save for a slight smudge. 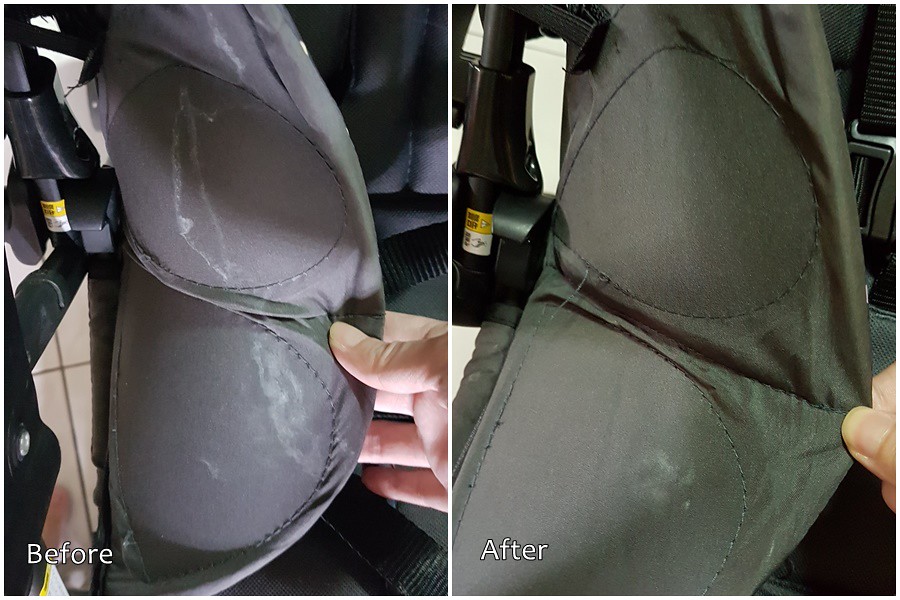 The left exterior of the seat was badly stained as well. After treatment, a faint outline remained. 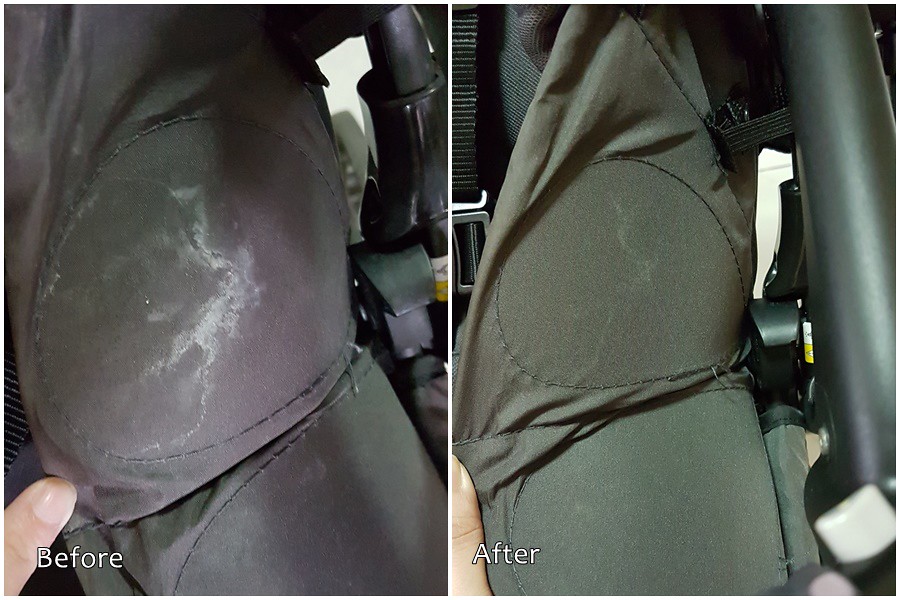 Over here as well. 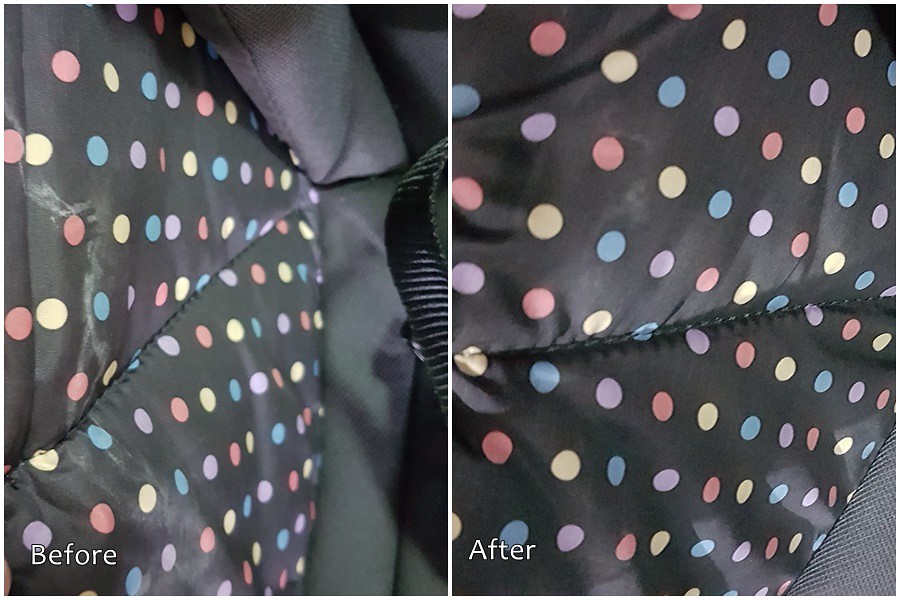 I know what you saw and what you’re thinking. I asked PramWash why. 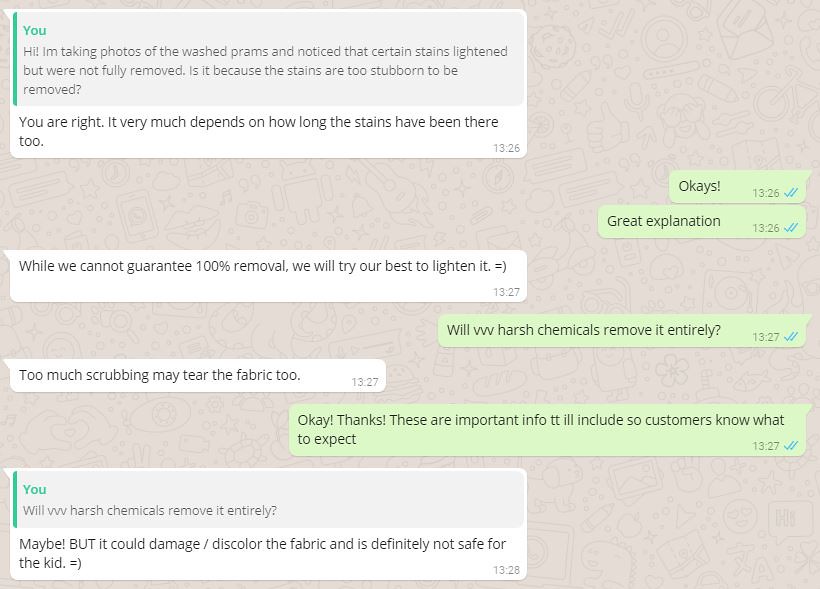 In addition, the fabric may be torn if it is scrubbed too much. PramWash uses a non-toxic solution which is safe for children. As the fabric is in close contact with babies’ skin, this is their topmost priority – safety.

Purchased second hand off Carousell, this stroller was “only used once”. I bought this because it has a full canopy which the Aprica lacks. It is Didi’s stroller for short strolls. I sent this instead of the Doona for the same reason – because it is a pain to remove the fabric from the chassis. It’s much easier to do so for the Doona. The Combi has been stepped on by Elise with sandals on and its front bar has been chomped on by Didi. As I ran my fingers along the grooves, I felt bits of coarse sand and dirt. Although relatively new, it earned its right to a deep clean session. I purchased the Basic treatment and was given an upgrade to Intensive treatment.

Like the Aprica, there was a wipe down of the chassis, steam clean, vacuum and stain treatment.

From afar, it appears mostly the same before and after, except for the adjustment of the handlebar cover. 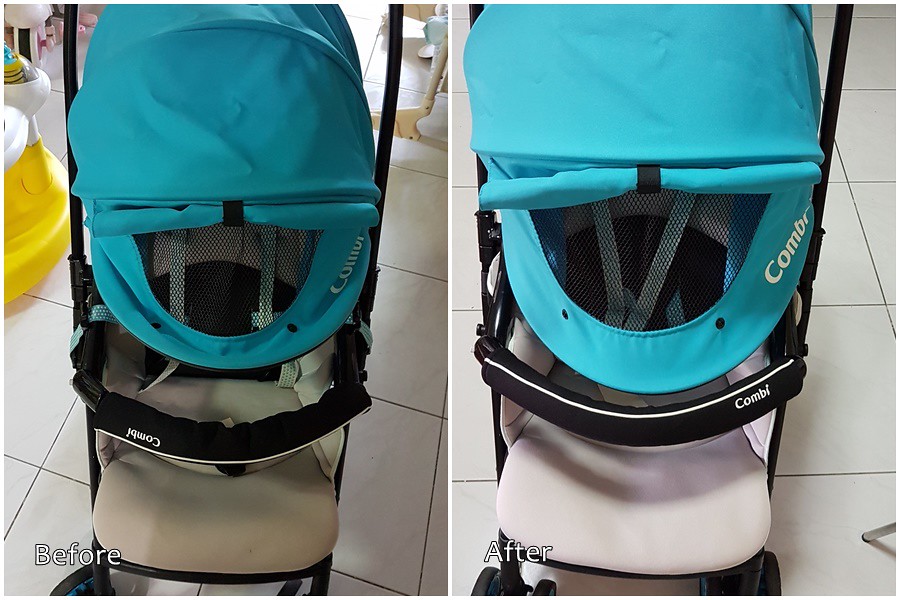 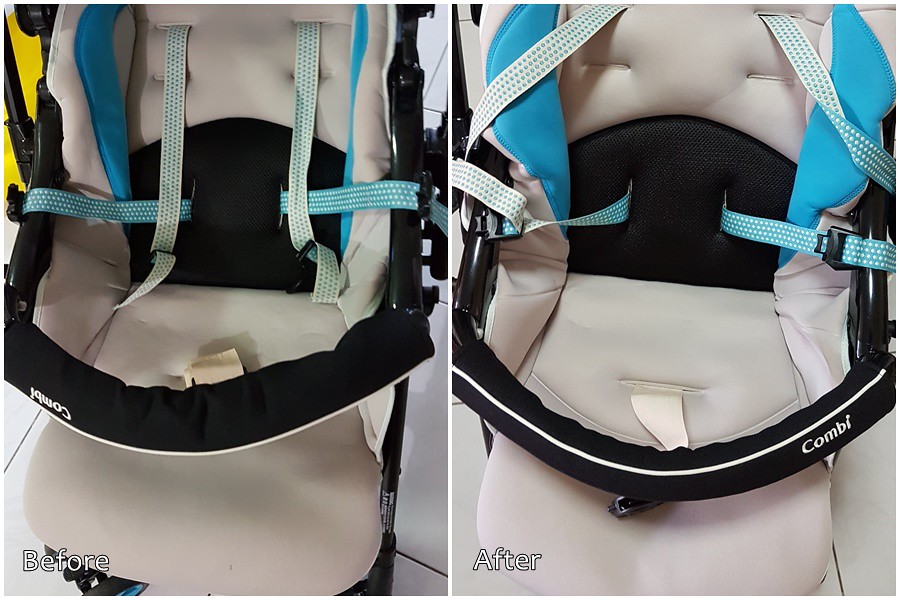 Up close, you can see that the black mark near the edge has been cleanly removed. 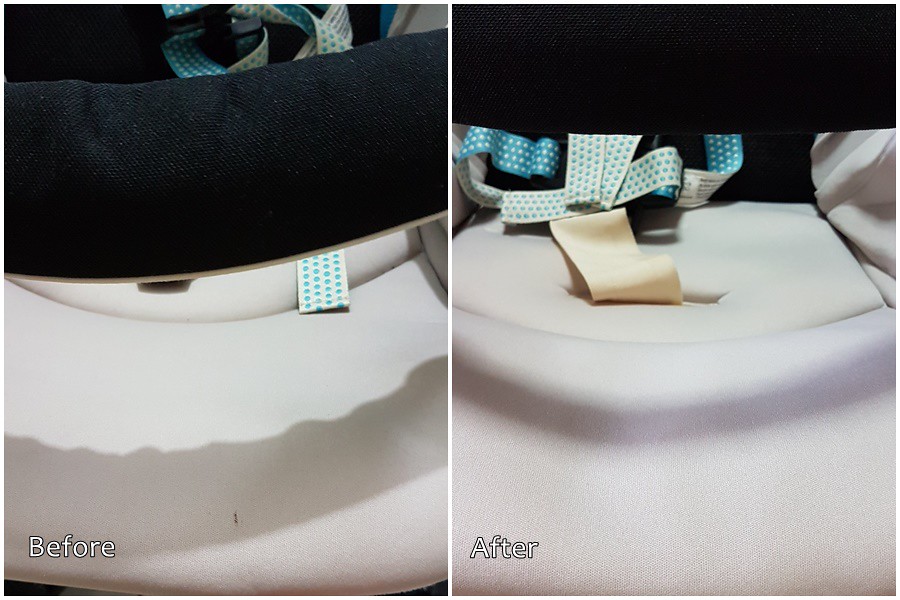 These stains have been removed without trace too! The wheels were also cleaned up. 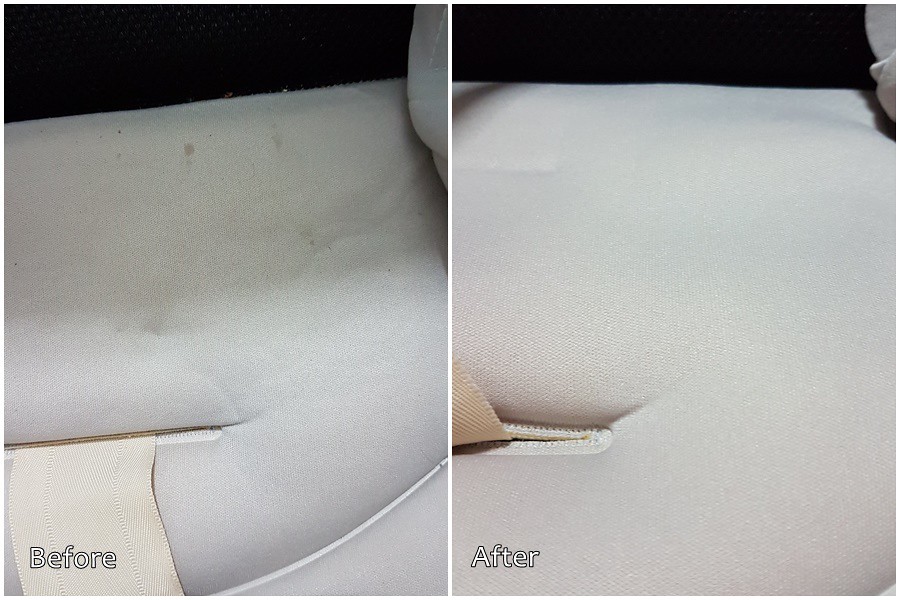 Wrapping a wriggly baby is challenging so I prefer to use a SSC. Again, I contemplated whether to send the Free-To-Grow which we have been using regularly, or a Standard carrier which he has not quite grown into yet. Eventually, I sent this after consulting a friend. My friends have the dubious honour of making such inconsequential decisions. I normally throw my SSCs into a laundry net and straight into the washing machine. 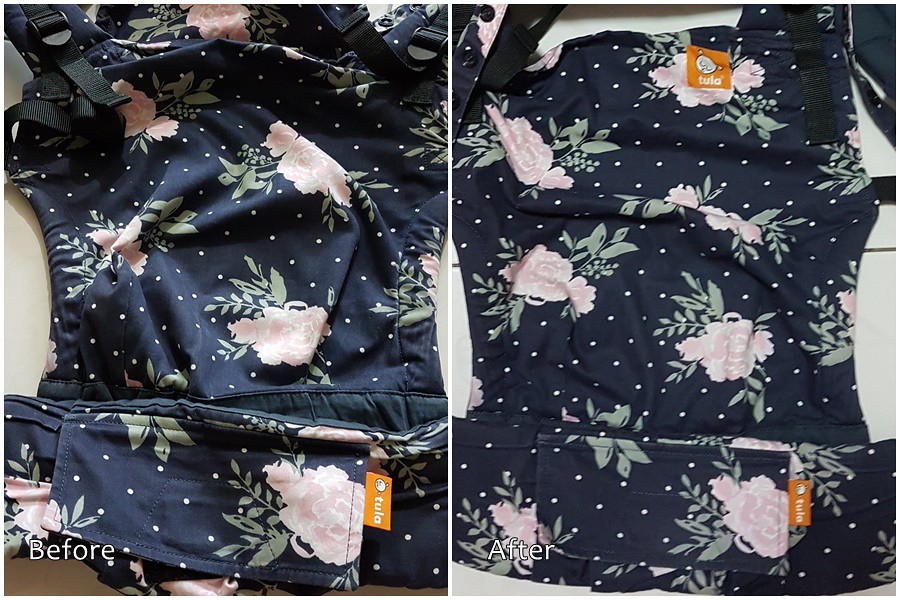 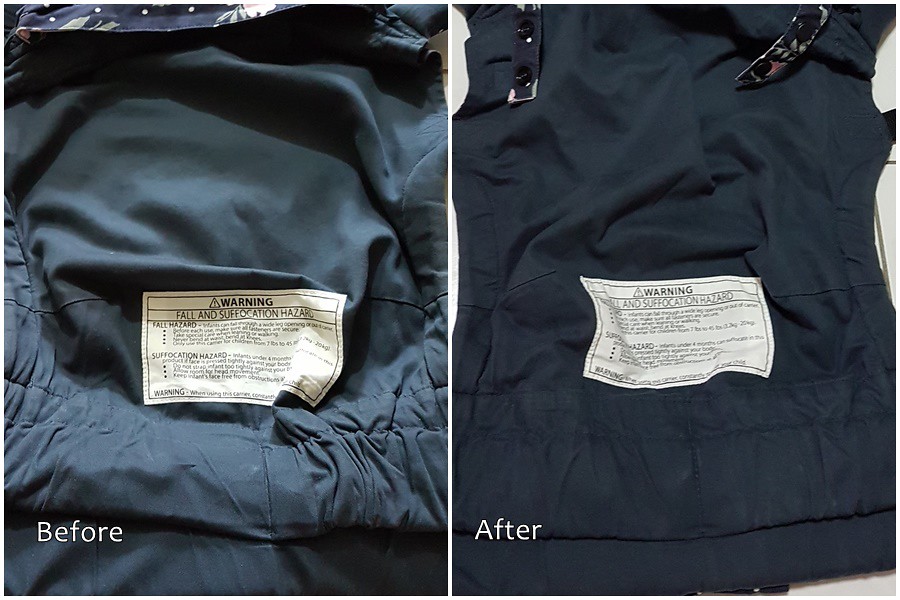 PramWash uses a non-rinse and non-toxic surface sanitiser that is formulated in Singapore. I purchased this which is meant to be sprayed onto the stroller after each use. 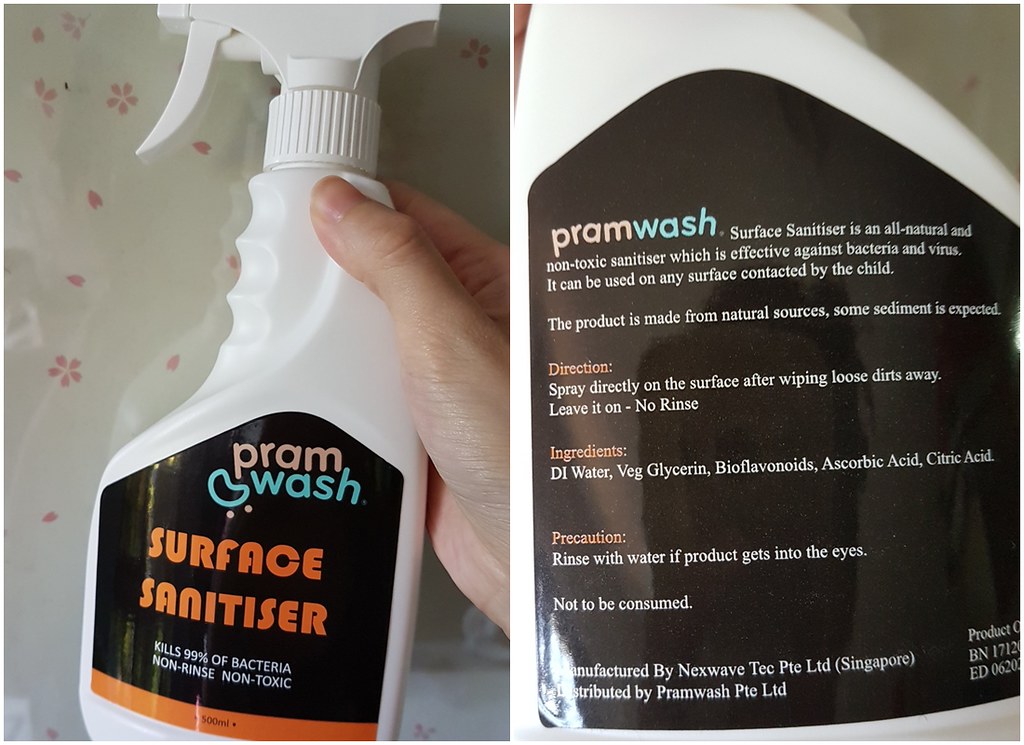 Our babies’ skin come into direct contact with strollers and car seats, but regular maintenance and upkeep is often not done. Leaving it to the professionals ensure that your stroller/car seat is not only clean but safe for your baby to use.

PramWash advocates regular washing of strollers at least once every 3 months to reduce the accumulation of illness-causing bacteria. Ideally, it should be washed as often as you wash the inside of your car.

The best time to wash your baby gear is when you’re on vacation and do not need to use the gear often (e.g. June/Dec school holidays).