It is never easy sending your child to the operating theatre. Though it is just going to be a simple examination under anesthesia (EUA) and mold creation for her prosthetic eye, she will still have to undergo General Anesthesia. This will be her third time in 3 months. 🙁 I’ve asked both the surgeons if the procedure can be done under sedation but they told me that sedation would not be sufficient as the process of creating the mold is uncomfortable. It would be more traumatising for her if she wakes up halfway instead.

Tomorrow’s procedure is considered low-risk so I hope everything goes smoothly. I still remember when the nurses were waiting for her to recover from anesthesia in the holding area after her enucleation. Her non-eye was covered with an eye patch and blood was seeping through. 🙁 She likely will not need to be warded tomorrow. After Chinese New Year, we will need to visit the hospital for 3 consecutive days for the construction and fitting of her prosthetic eye. On the first day, they will see if the mold fits. On the second day, they will commence on hand painting the acrylic customised eye. On the third day, the eye will be ready and we’ll be taught how to insert and maintain the prosthesis.

As with every procedure requiring anesthesia, she will need to fast. The deadline is 12 midnight for solids and all sorts of milk and 4 am for water, glucose water or honey water. She’s currently knocked out but I managed to feed her some milk. She won’t be able to consume anything until after the operation ends. Hopefully, it won’t be too taxing for her. We have the earliest slot so we’ll need to wake up extra early to cab over.

It has been raining heavily for days on end. The laundry takes forever to air dry and we have been confined to the neighbourhood for the past week. It’s like free air conditioning and the weather is the closest it gets to “winter” in Singapore. The downside is that the coldness just makes me want to curl up under the comforter and hibernate the day away. There’s also the immense boredom of being cooped up at home…

Elise turned 15 months a few days ago. Ever since she was born, breast milk has been her main source of milk. She was nursed exclusively for 6 months and has been latching daily up till now. I’m not sure if the problem lies with my supply, but I find myself becoming increasingly annoyed when she wakes up to latch in the middle of the night. She’ll climb over me, change sides, switch positions all while chomping down onto my boob, refusing to let go until I pry open her mouth with my fingers. I chided her and commanded her to “stop it” and it wasn’t a good feeling for either of us. 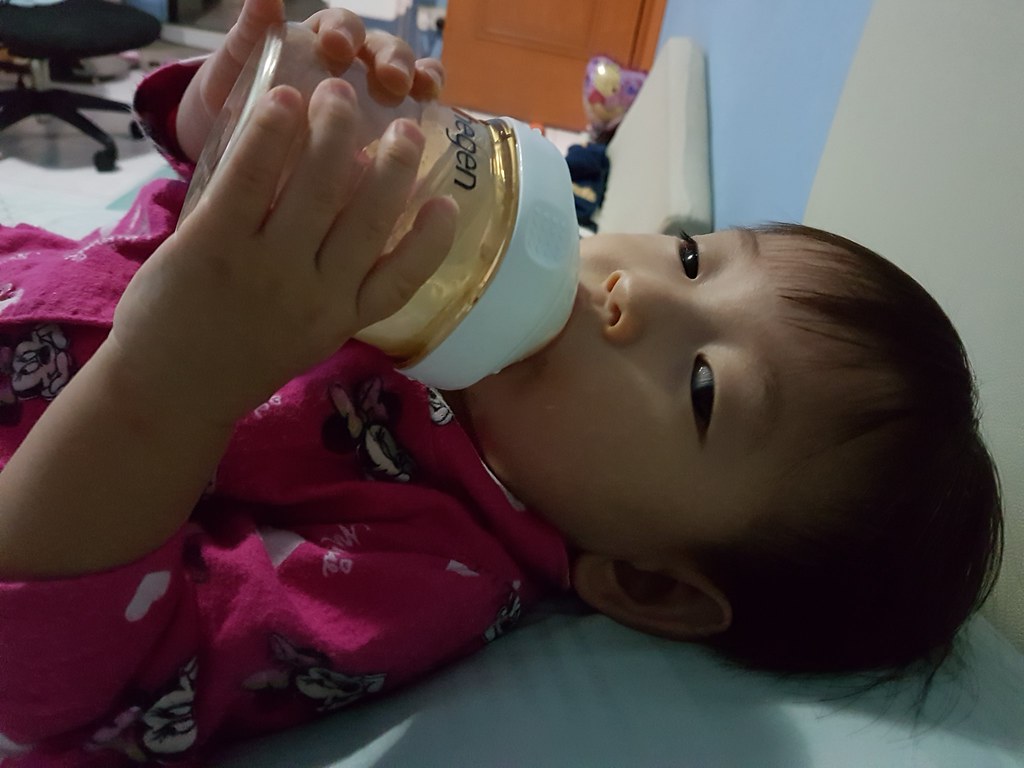 That’s why I made her a bottle of formula milk this evening from a sample tin of Gain IQ which I received earlier. She drank all 120ml of it in one go. I still believe that breast milk is best as it’s customised for the child but knowing that she is receptive to formula as well as a range of other types of milk (oat milk, fresh milk, thawed frozen breast milk) is comforting because it provides a back-up solution for when I need to rest. Formula is overpriced and it doesn’t make sense to rely entirely on it when it’s not essential for growth. Besides, she has such a voracious appetite, her nutrient requirements can easily be met through solids. Normally, she doesn’t pay much attention to her father but when he is eating, she’ll toddle up to him and act coy. She’ll sit on his lap and say “AH-MM!!!”. 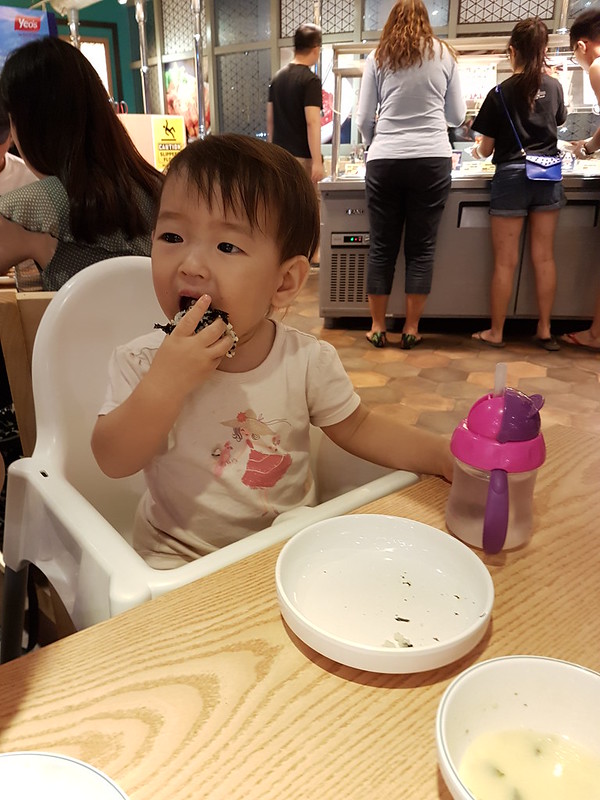 I’m quite sure I’ll feel bittersweet when she weans but such is life. For every beginning, there will be an end.