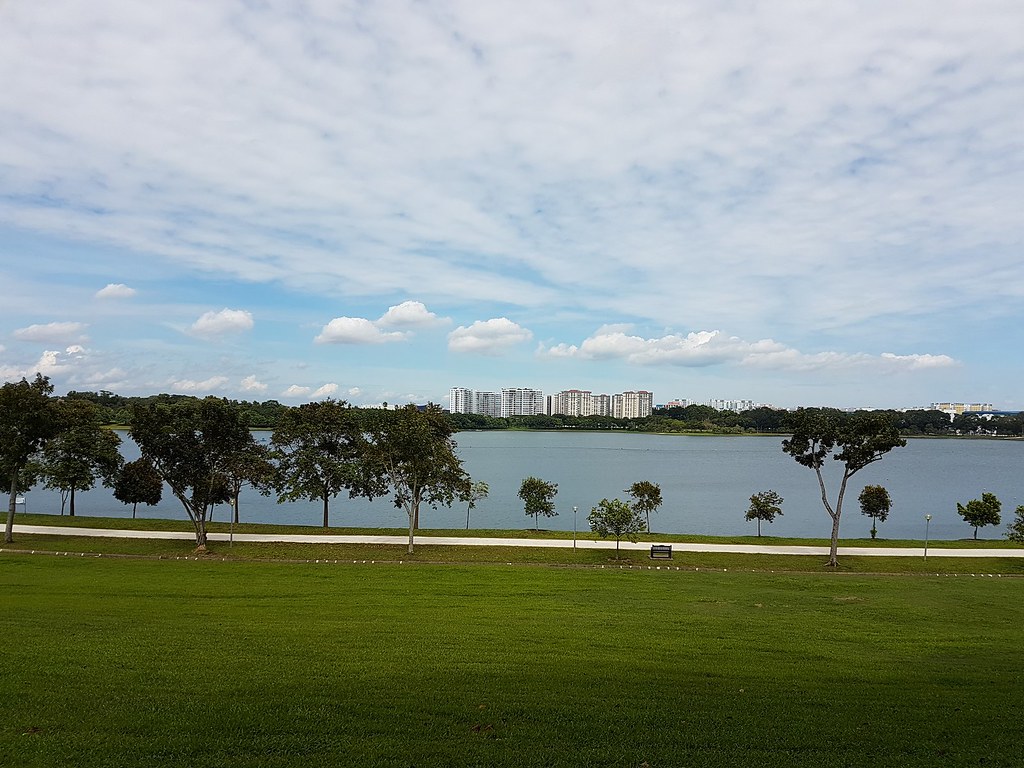 A few weeks ago, I visited my friend from secondary school who gave birth recently. Both her and her husband were all-rounded model students (smart, school councilors, leadership roles in their CCAs) and nurtured their young love for over a decade before getting married. I wasn’t close to them and didn’t keep in touch after graduation, so our only connection was Facebook.

She messaged me over Facebook after reading about Elise and told me about her newborn son having to undergo an emergency operation due to a congenital birth defect. Thankfully, her son is now healthy and thriving. After Elise’s swelling subsided, I made arrangements to visit them. My friend’s nephew was also there so both of them played together. When the kids got restless, I followed my friends mother-in-law for a stroll to the nearby reservoir. 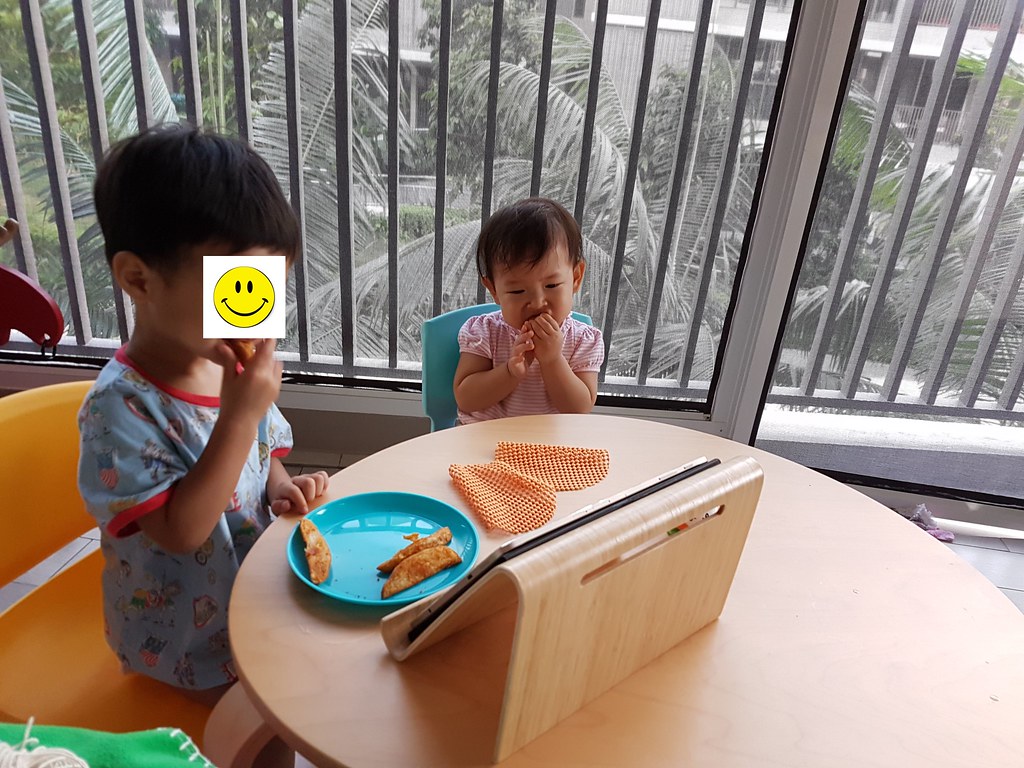 There, I told her that I stopped working full-time and am now physically around Elise 24/7. Recently retired after having worked as a nurse for more than 30 years, she emphasized the importance of a woman needing to earn her own money. “Men respect women who earn their own money, even a little. It gives you a voice”. I agree with that actually, because having to depend on another person entirely for finances makes you a bit vulnerable and dependent. She also shared with me her child-rearing tactics, claiming that she never needed to use a cane.

“I understand that your maternal instincts are strong, especially when she’s still young. However, she’ll need you lesser when she starts school full-time and you may find it challenging to get re-employed with a gap. Moreover, working outside makes you creative which helps in educating her”. 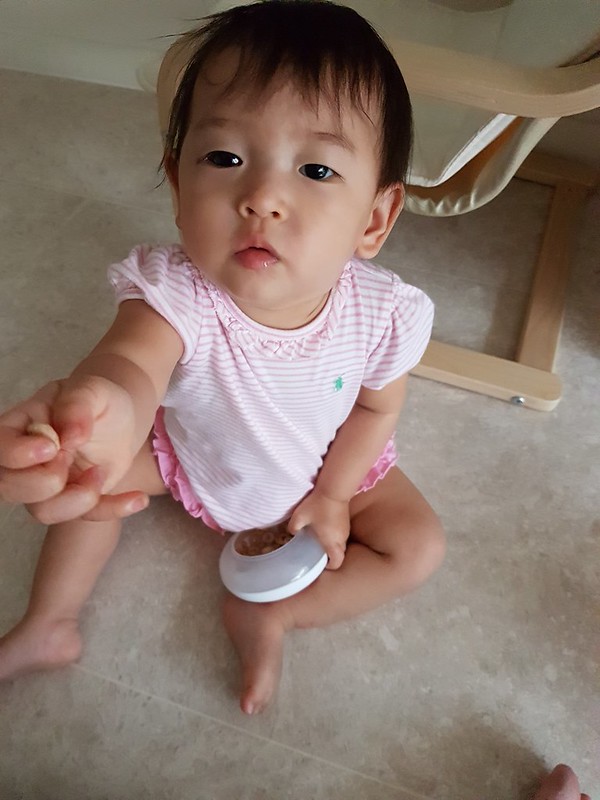 It’s been about 2 months. Weekday mornings used to be immensely rushed. I had to prepare lunch for her, get ready for work, latch her and express out some milk for her all in an hour. Commuting to work took an hour. Including travel time, I was away from Elise for at least 10 hours. Now that I have the luxury of spending the entire day with her, I get to bring her for impromptu meetups with her baby friends.

On the housewife front, I’m still getting nagged at by my husband for not doing the laundry properly or keeping the house clean enough. He’s the one who picks up stray hair strands, sets a timer for the laundry so he can “save water” and vacuums the floor. What kind of chores am I doing at home? Cooking, washing the dishes, dumping the clothes in the machine on “Quick” mode (“You didn’t use softener right? There’s no fragrance!”) and haphazardly draping them onto the laundry line (“NO! Look at those crumpled clothes! You need to fling the water off the clothes before you hang them up! 야! 뺄래를 탁탁 털어야지!”). His best line is “너 근대에 한번 갔다와야돼” or “You need to go to the army”.

We should really hire a part-time helper.

For 2017, I should make some plans for my personal growth as well.

Meanwhile, I’m just going to enjoy whatever time I have as a housewife. 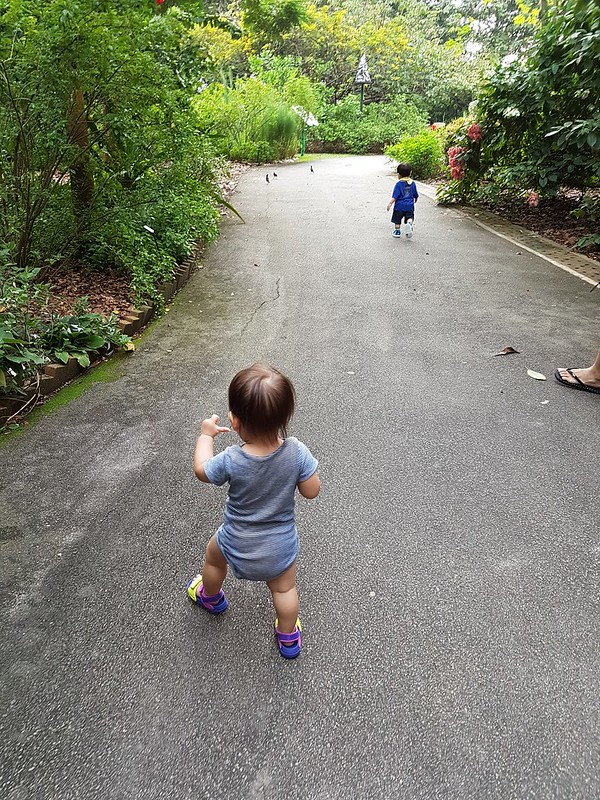 Here’s Elise and Matty at the Botanic Gardens – one of our impromptu playdates where we brought the babies to a water park without towels or spare clothes. Thankfully, the babies were air-dried quickly due to the toasty air. We managed to get them to hold hands! Hehehehe. 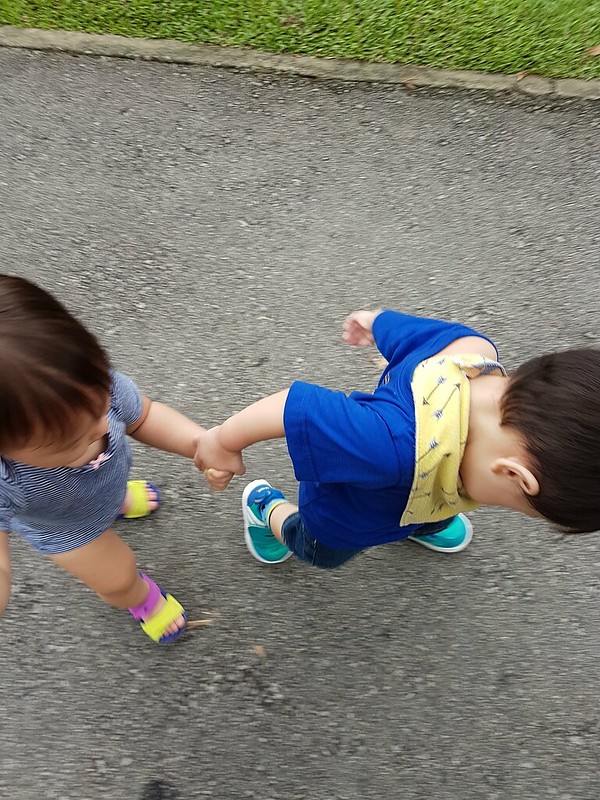 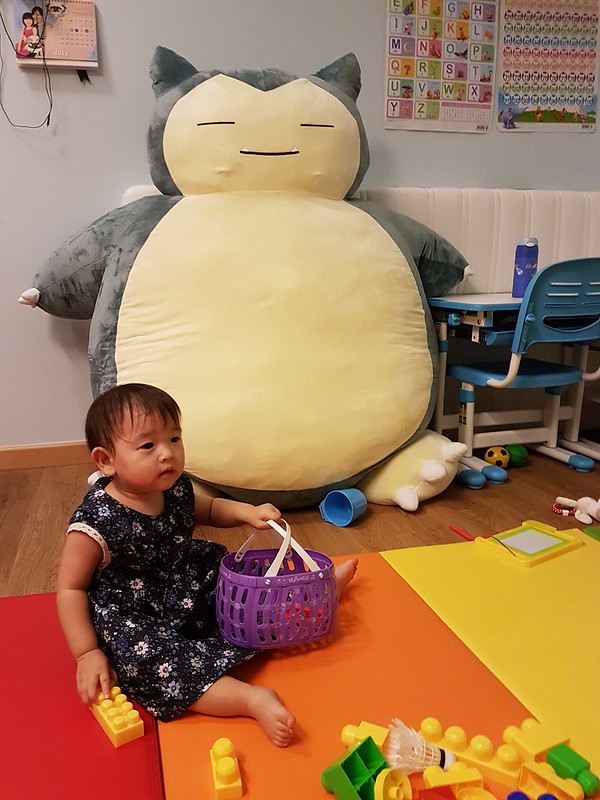 On Boxing Day, we met new friends. We joined a group of Singapore-based wives with Korean boyfriends and spouses. The location of the meetup had an amazing view of the CBD. We exchanged presents, the kids chased each other around and my husband finally got to enjoy some beers and pour out his sorrows to people who get him.

The men created their own chat group too. Now he can feel like he belongs~. My husband was extremely reluctant to accompany us at first. He was already all dressed up, sitting in front of the computer and asking “Do I really have to go? Why don’t you go alone with Elise?”. He ended up enjoying himself tremendously. See? You may be right, but your wife is never wrong. 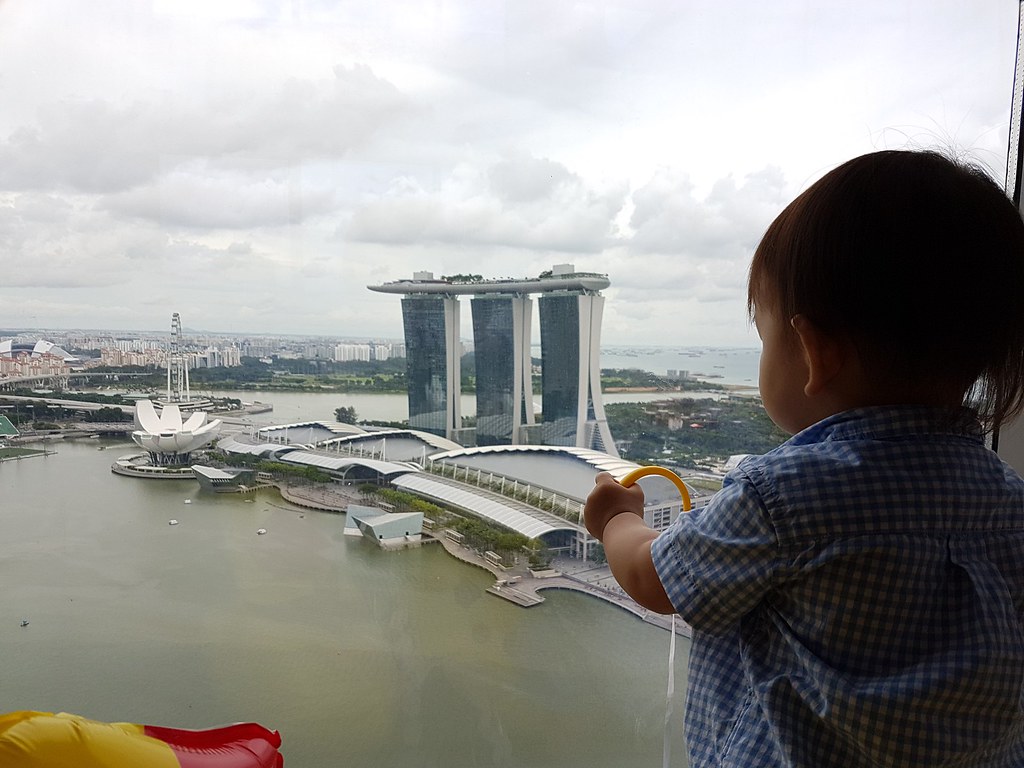 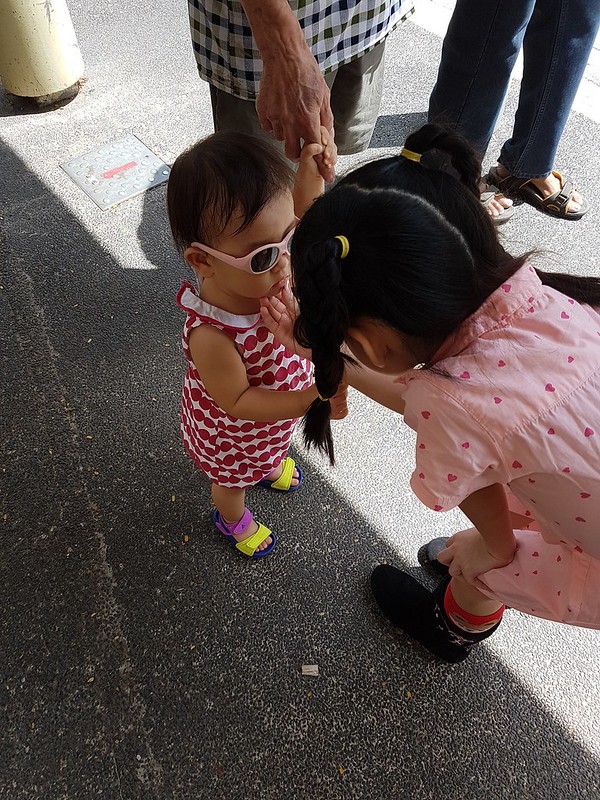 At the bus stop near our house, a little girl came over to tickle Elise’s chin out of nowhere. Superstarrrrr. This was the day we went to the hospital for her check-up. We saw Dr Ganga again and he stressed on the importance of genetic testing, especially if we are intending to expand our family. This test is not covered by insurance and costs approximately S$3,500 because the specimen and blood samples have to be flown to Canada. Genetic testing for Retinoblastoma will show if it is an inherited condition (if it is, the risk of siblings developing Retinoblastoma is much higher). Dr Ganga asked us to crowdfund if necessary, but I don’t feel comfortable sticking my hand out to ask for money from strangers.

From the articles we’ve read online, it doesn’t seem likely that it will recur. Retinoblastoma metastasis generally occurs within the 1st year of diagnosis. 15% of unilateral retinoblastoma cases develop tumours in the other eye. A good thing is that her optic nerve was cancer free and recurrences usually occur with tumours which touch the optic nerve. Is this money worth spending? I’m really not sure. My father suggested that the hospital should use her case as research and pay for the genetic testing since Retinoblastoma is so rare in Singapore.

On the 25th, Elise will undergo another Examination Under Anasthesia (EUA). It’ll be the third time since November that she’ll be under GA. I’ve read about decreased intelligence in children who have underwent GA compared to those who have not undergone anasthesia. 🙁 I’ve asked the doctors but GA is their preferred method as they will also be creating a mold for her prosthetic eye and they don’t want to risk her waking up during the procedure. 🙁 This won’t be the last EUA as Elise will need to be under surveillance to monitor for recurrence.

Dr Ganga mentioned adjuvant/preventive chemotherapy (chemotherapy that is done after surgery to eliminate cancer which may not have been physically excised) that I am not keen on. It’s like a repeat of my cancer situation where the physical tumour was removed with surgery and adjuvant chemotherapy was declined. Let’s just hope that it is truly gone and doesn’t metastasize elsewhere years later. 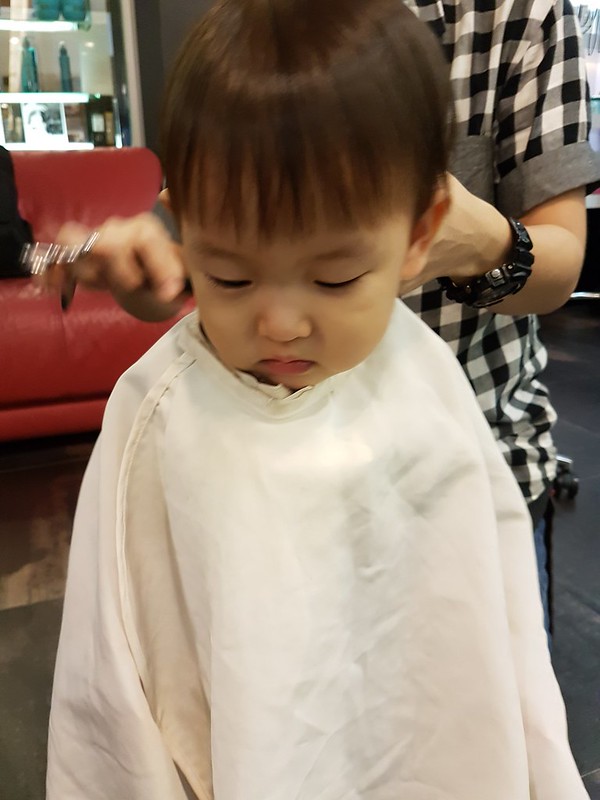 In other news, look who had her very first professional haircut! I’ve only snipped her fringe twice with blunt scissors. My husband booked an appointment for all of us with Edward, his new friend, who happened to work at Dusol Beauty. I used to frequent the salon years ago. Edward was incredulous that I didn’t recognise him because he worked there longer than my hairstylist.

My head feels much lighter. The last haircut was months ago at a dodgy $4.90 place. Being pampered with a shampoo and head massage sure was heavenly. We had mall vouchers so the total cost was very affordable!

Getting her to stay still was a challenge. 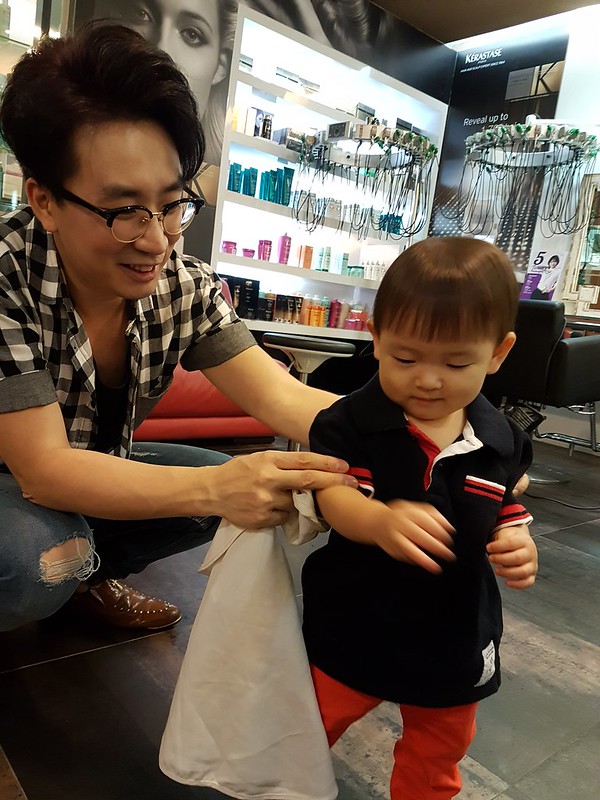 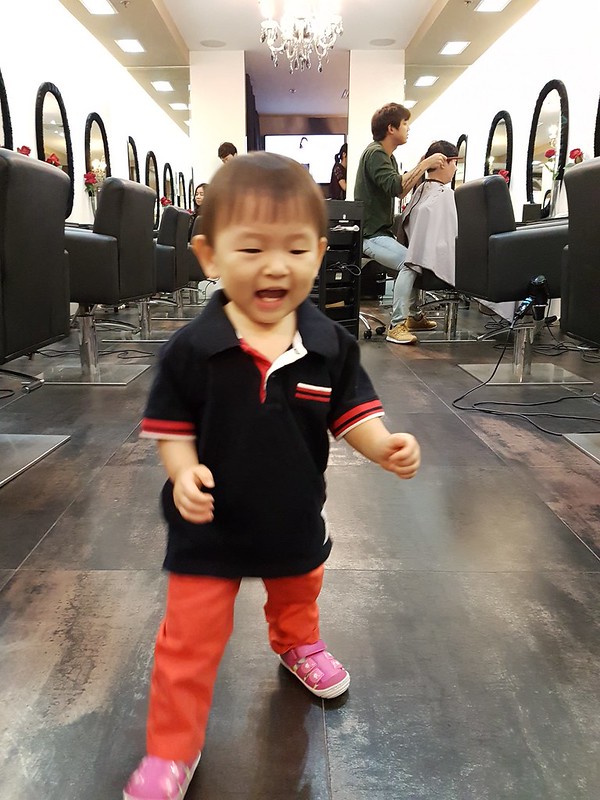 I am Elise, hear me roar! Straight bangs to look like a little boy. We all had new haircuts for the new year. 🙂