What a difference a day makes. This photo was taken a day before we received the lab results from the hospital. I brought Elise downstairs for a walk around our neighbourhood. She has just began to walk unassisted and still very much prefers us to hold her hand.

On Friday, we went to NUH to collect our lab results. Dr Ganga wasn’t in so we met Dr May who told us that the lab results were in and that there’s no evidence of remaining cancer which requires systemic chemotherapy. This is excellent news because it means that Elise doesn’t need to be hooked up to a machine to receive a 6 dose toxic cocktail which may cause long-term effects. We sort of knew already, because if the lab results showed a negative result, the doctor would have called us in much earlier to start treatment because cancer waits for no man.

I’m feeling a little incredulous. What are the odds that both Elise and I developed extremely rare cancers with an extremely high survival rate which only required surgery to cure? Both our cancers were contained and easily removed. I was advised to do systemic chemotherapy with a 30% possible relapse rate but I didn’t and it has been more than 5 years since my surgery.

When I had surgery, my surgeon passed me photos of the tumours. I briefly wondered where the photos were for Elise’s tumour then realised that it’s better that I not look at a photograph of my baby’s gouged out eyeball. 🙁

Would it be alright to say that both of us are lucky and got off relatively unscathed? I have a battle scar which resembles a C-section scar but my ovaries were saved and I conceived Elise. Elise lost an eye but she is already considered fortunate; children have lost their lives to Retinoblastoma. Elise will require constant check-ups to see if the cancer reoccurs in her good eye or elsewhere (oh my god, choy, touch all sorts of wood) but otherwise, she’s a-okay for now.

The nurse at Dr Ganga’s clinic has a daughter who got her prosthetic eye done at NUH and she explained the procedure to me. It sounds FREAKING painful. She says something will be injected into Elise’s remaining eye in order to create a mould for her prostheses. I’d better ask Dr Ganga what the exact procedure is like. Poor baby. ㅠ_ㅠ

The moment I received the news, I told the October moms and they were so so so happy. Some of us brought our babies for an impromptu play date at Gardens by the Bay. I packed sunglasses and dressed her in overalls because I thought it would be sweltering. The Flower Dome was entirely air conditioned and protected from the harsh elements. It’s basically like being in a ginormous terrarium. 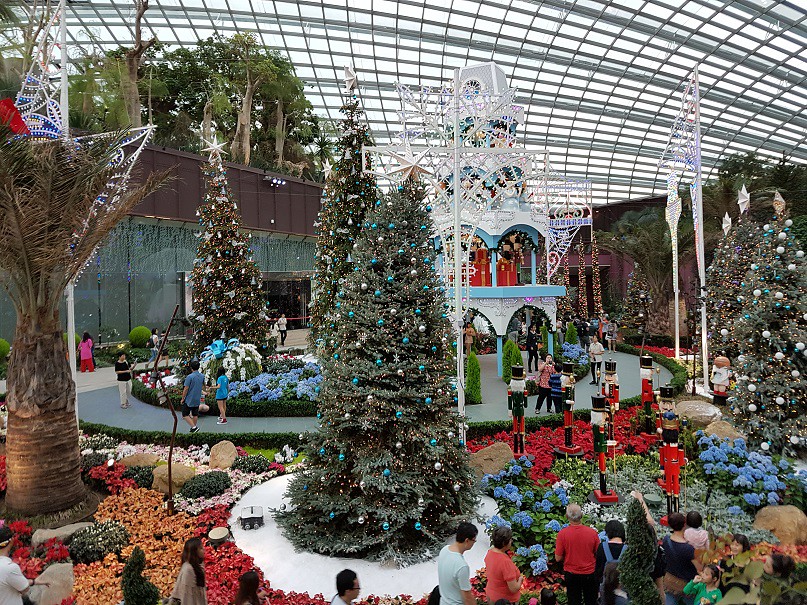 The Christmas Wonderland theme is up. My eyes were on Elise so I couldn’t fully appreciate the environment. Actually, neither of us 5 mummies managed to do so because we were all chasing our bubs everywhere. Getting them to take a photo together was a test of skills. They sat still for a grand total of 2 seconds before crawling or walking away. 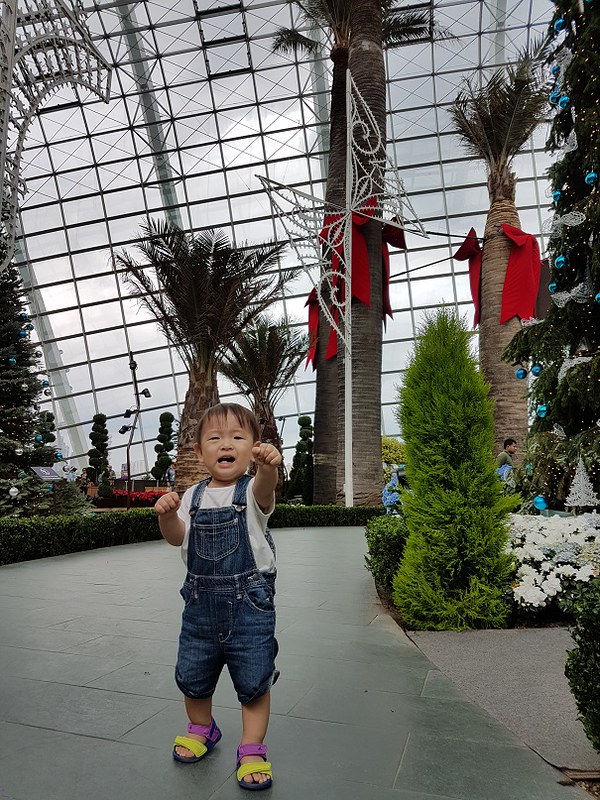 Elise walks with her hands up to balance herself. If she is distracted, she can walk many steps unassisted but when she is fully aware, she whines for me to pick her up and waddles like a robot. 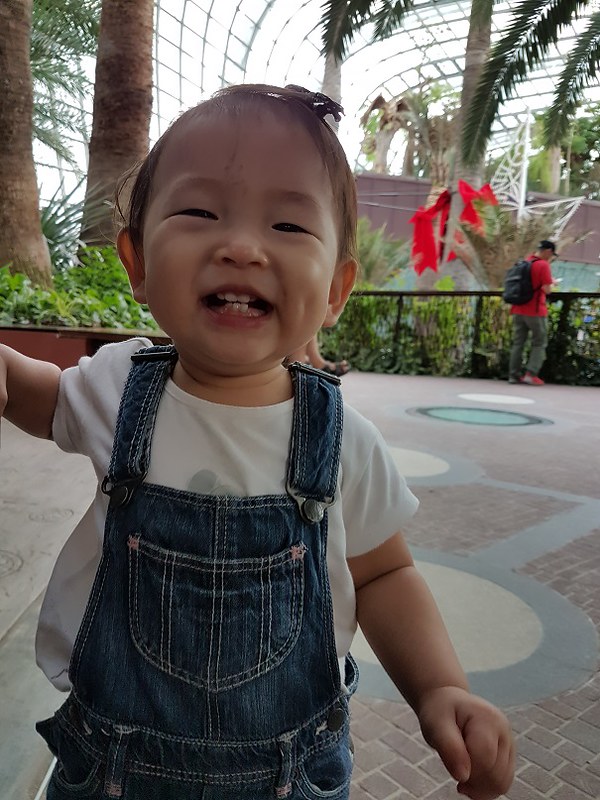 It’s not that visible from this photograph, but her right eye has been fitted with a conformer. It has a black circle in the middle so if you stare carefully, it looks like she has a red eye. It’s actually her eye muscle behind the conformer. It does look obvious but works well as a temporary fit. Dr Ganga specially put in this conformer rather than the standard transparent conformer in. This way, we can all look at her in the face without having our hearts stabbed with pain each time.

The babies were fascinated with this kaleidoscope feature. 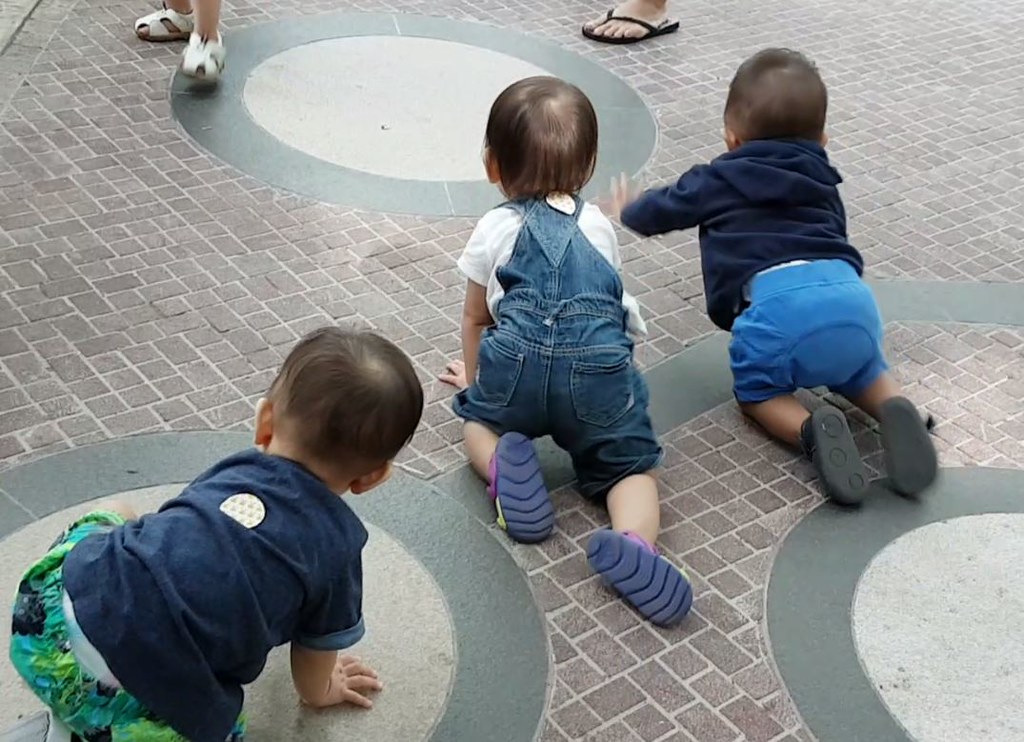 Noah noticed that Elise was more comfortable crawling around, so being a little gentleman, he dropped down and crawled around with her. Yes, we let our babies crawl on the dirty tiles and all we did after that was clean their hands and knees with wet wipes.

The past month has been traumatising for Elise. She’s blessed to have a bunch of friends who genuinely care about her health and well-being! 🙂 Buddies since womb service.