There are some questions which I’ve repeatedly received, so I’m answering them here.

Q: Will the doctors put her eye back later? Can she get an eye transplant?
A: This is probably the most commonly asked question. Honestly, when I get asked this question, my eyes roll right up and I really feel like shaking the person up and down.

If the surgeon could delicately and precisely excise the tumour from the eye and carefully fit her eyeball back in its socket, we would not have fought and argued within ourselves – put back can already, what. Please, people. THINK before asking. It was a cancerous, malignant tumour which multiplied and replaced normal retina cells.

The simple answer is – No. Enucleation includes severing the optic nerve that transmits signals to the brain and removing the entire eyeball. “Eye transplants” as we know it, are actually cornea transplants. Even if the eyeball could be transplanted and reconnected, there would be no way to link the brain to the eye.

She will get her prosthetic eye fitted in a few weeks’ time, but it will not be her old eye because it is diseased. At this point in time, it has probably been chopped into bits and pieces, poked and prodded and is either lying somewhere in the hospital’s lab or disposed as biomedical waste.

Q: How did you find out about her condition?
A: I answered it in this article. She had a lazy eye condition where her right pupil would be slow to follow so I got a referral to NUH after the opticians in Korea urged us to have her eyes checked. The “white glow/white reflex” which showed her tumour only ever appeared in one photo which was taken during her first birthday party. The pictures were received after her diagnosis, so it didn’t matter. 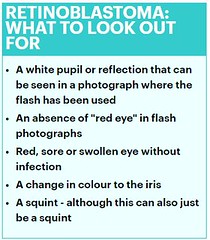 Q: Is Elise okay? Will she need to do chemotherapy?
A: She is still coughing (for more than 2 weeks now). The cough sounds like it’s tapering off. Her appetite has increased and she’s still the same baby. We have to wait for the doctor’s report next week before we determine if she’s okay or if she requires chemotherapy. We hope not because it will mean more hospital stays and Elise will be weakened significantly. More importantly, the side effects of chemotherapy may stay with her for life.

She seems happiest when she is latching. If I flash my boobs at her, she brightens up into a smile and crawls over to latch. Since it’s recommended to breastfeed until the child turns 2, I won’t be weaning her. Weaning should only be decided by the mother or the child and not by a third party who has no business interfering. I received some lactation oat balls which I’ll review soon! I’m just glad my boobs still serves its primary function which is to produce milk.

Q: What about your work?
A: I switched to part-time work the week before she was diagnosed. When my boss knew, he offered me a freelance position which will stand until I decline it or I can commit enough time to work part-time again. Before Elise was diagnosed and I was working full-time, I already had thoughts of reducing my work commitment because I knew that every minute spent at the office was a minute that I could have spent with her. My dad is an awesome caregiver to Elise but it is extremely taxing to look after a child alone.

Q: Are your finances okay? Do you need crowdfunding?
A: Luckily, I bought an integrated shield plan for Elise which covers up to private wards. This means that you can seek treatment as a private patient and make claims for consultation, surgeries, hospital stays and follow-up treatment. For Elise, she sought treatment as a subsidised patient. What insurance does not cover, though, is the cost of prostheses. I’m not sure how much a prosthetic eye costs, but it shouldn’t be too expensive.

Our family is probably considered as a lower income family (we hold a Blue CHAS card) but we don’t currently need crowdfunding. There are many needy people and other children in worse circumstances. The other 3 young patients in Elise’s ward had cancer too. All had surgery which lasted many hours more than Elise’s 2-hour operation.

A 22 month old in that ward has neuroblastoma. He had a 13-hour surgery on his liver and is now on his 5th cycle of chemotherapy. The doctor was telling his mother that it’s a long journey and they were only halfway there. Imagine having your child undergo so much with no absolute way of treating the cancer – they could fly to US, but it would cost at least $200,000. These are the families who will benefit from crowdfunding. Those who have a shot at treating illnesses but are deterred by the astounding medical costs.

The sad thing is children do die from pediatric cancers. A friend I made recently told me that it happens more often than we think. In the metal cabinet where they keep hospital linen, there’s one compartment labelled Mortuary Shroud. In a pediatric ward. Children signify life. Some children have their lives cut short abruptly due to illness. 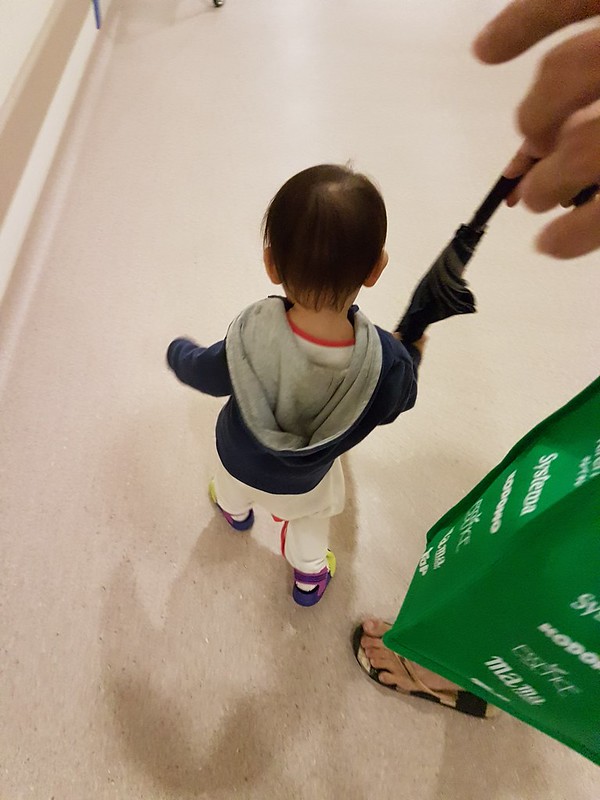 Q: Are YOU okay?
A: I don’t know how happy or okay I am supposed to feel. Having survived a depressive episode a few years back has made me stronger. I went to the office today to work. I haven’t been missing my meals or sleep. Like my dad says, “That’s life”. Maybe we’re all only healthy until we’re diagnosed. If I hadn’t brought her to the doctor to check on her squint, we would have missed out on her condition until the symptoms became too obvious to ignore. If so, we would most definitely lose her, so we should be happy that we saved her life.

After the operation, her eyelids were sewn shut to aid healing. We were supposed to apply ointment in between the eyelids and apply a thin layer over. It took three of us to apply ointment for her during the first few days. Two held her down and one applied ointment. Yesterday at the hospital, Dr Ganga removed her stitches. A new friend whose daughter had her eyes removed warned me that it would be red, raw flesh underneath the stitches and I had to brace myself for the sight.

I couldn’t look, so I had my back turned when Dr Ganga snipped the thread. He coaxed me to come and take a look. Thankfully, it looks nothing like what we see in horror movies because he placed a conformer. It is somewhat like a black contact lens. He says some parents who find it okay decide to stick with it and forgo prostheses, but we’ll definitely be creating a prosthetic eye for her.

Her right eyelids are still swollen and bruised. When she opens both eyes, the right side is significantly lower than her left. It doesn’t look proportionate but I am quite sure once her swelling goes down and her prosthetic eye is in place, it will be “normal” again. I’m quite confident of this because Dr Ganga has shown me his previous patients and we couldn’t tell which eye was fake, at least from photos. With her prosthetic eye, she’ll look like she has a lazy eye because it won’t move around as freely as a real eye.

Today, I couldn’t control myself and cried when looking at her. She is behaving normally and being herself. She learnt how to identify some animals on her picture book and can move our fingers to the correct animal when we ask her. She wolfed down many blueberries and is still her cheerful self.

“Looks are not everything”, “It’s not permanent”, “At least she’s alive”. These phrases are supposed to be encouraging but my husband and I feel quite crushed. She used to look so cute. When she waved at others, people would always wave back and play with her. We brought her out yesterday and we can already feel the difference. One particular cleaning lady at the food court (bless her socially challenged heart) asked me point blank “What’s wrong with her eye?”. Lazy (ashamed?) to explain, I brushed her off, saying it was an eye infection. I took photos of her but I won’t be uploading them because I don’t want people to snigger or laugh at her current appearance. People can be mean sometimes. Audrey posted photos of Fighter as a preemie and some utterly vile animals cursed him. I don’t want that happening to Elise.

I’m her mother. I’ll love her regardless of whether she looks like the old Elise or an alien or a pancake. If the test result comes out clear next week, we can start rebuilding our lives.

2 Replies to “After The Operation”