I delivered two children (2015, 2017) at NUH under the subsidised scheme, without a fixed gynaecologist.

Why NUH?
I did an operation at NUH many years ago and was warded at the maternity ward. I received exceptional care and made a note to deliver my future babies there. For my first pregnancy, I found out at 4 weeks through a blood test at the hospital, so I was referred to Clinic G for follow-ups. From there, I continued with the appointments instead of looking for a private gynaecologist. Not having a fixed gynaecologist never bothered me as I didn’t have any complications and my pregnancies were low risk (no gestational diabetes or placenta previa etc). Both pregnancies were smooth and did not require special attention.

If you want to follow the subsidised route, you’ll have to get a referral letter from a clinic to the hospital. At Clinic G, the waiting time was about 1.5 hours but there were times where I saw the doctor within 5 minutes of arrival. Sometimes, I would get rotated to the same gynae/medical officer. There was a male gynae (Dr Ng Ying Woo, who has since left NUH to practice at SBCC) who was frank, humorous and not condescending. When I went for my first post-natal check-up, he swooned over Elise, carried her around and showed her off to his colleagues like a proud uncle “She’s so beautiful! So cute! Look!”. You can obviously tell if the staff are happy at their job or just going through the daily grind. The ward nurses were really friendly and welcomed Elise back when she went back for a checkup at 4 months, taking turns to carry and play with her.

The experience was similar the second time round.

Consultations/Fees
Subsidised, each consultation cost about $20 without scans and $80 with scans. There is a a maternity package which you can choose from Week 22 onwards if you prefer a fixed gynae. You’ll be upgraded to a private patient and pay private rates if so. I didn’t choose the package as they only have 4 major ultrasound scans regardless of whether you’re a private or subsidised patient. I was rather envious of other moms who got to see their baby almost every visit but it wasn’t worth the extra money. The second time round, I confirmed that babies look nothing like their ultrasound scans.

Should I have a water birth?
Answer: NUH provides water birth services but you’ll have to be a private patient and there is a chance that you will end up delivering on a bed. If so, you’ll have to pay twice. You’ll also need to hire a doula and get a gynae who is able to do water birth.

Can I do delayed cord clamping?
Answer: This depends on the gynae’s beliefs. Most gynaes do not clamp the cord immediately, nor do they clamp only after the cord stops beating. There is no major difference for full term babies but it may have a benefit for premature babies.

Can I squat/stand during delivery?
Answer: When you are still in labour, yes. You can even dance before you are made to lie down on the bed. The midwives have been through so many deliveries, they know what to do.

What about a birth plan?
Answer: There is no plan if you’re intending to go the subsidised route. Sure, you can mention it to your gynae during your visits, but it depends on the MO or gynae who will be the one delivering your baby.

For my case, I wanted to avoid an episiotomy as much as possible, so I just said “don’t cut” when he was already holding up the scissors. Luckily, he listened and I wasn’t cut. I had a first degree tear which was very minor. The stitches took about 2 weeks to heal. The second time round, I didn’t have an episiotomy and also had a first degree tear which hurt lesser than the first round. I skipped painkillers both times.

Maternity Ward
The Class C ward was listed as an 8 bedder, non-air conditioned ward though it was not stuffy due to the central air-conditioning. Generally, if there are no complications, it’s a 3D2N stay for natural deliveries.

Nurses came by very regularly to check on me and baby, recording feeding durations and baby’s diaper output. They helped me to latch. Each morning, lactation consultants came by. The consultants were patient in addressing my concerns and helped me to express colostrum into a syringe for feeding. She also showed me the various ways of latching a newborn and how to check for correct latch. I would say they played a big part in helping me fully breastfeed Elise for 2 years and counting. With Emmett, I met the same lactation consultant who amazingly remembered me!

I was pleased with the service overall as the nurses were professional and attentive. They are a pro-breastfeeding hospital (they called a few weeks before I delivered asking me to leave my bottles and pacifier at home as well as after discharge to check on my emotional well-being and baby’s intake/output) and they promote skin-to-skin contact and rooming-in. If you’re extremely tired, you can get the nurses to wheel the babies back to the nursery. Otherwise, the baby will be with you the entire time except for tests, injections, baths and when they make poonamis which are impossible to clean with just wet wipes.

These are probably surplus goody bags from seminars and events, but it’s not shabby! There’s a nursing cover, baby blanket, samples of wet wipes and baby toiletries and diapers. 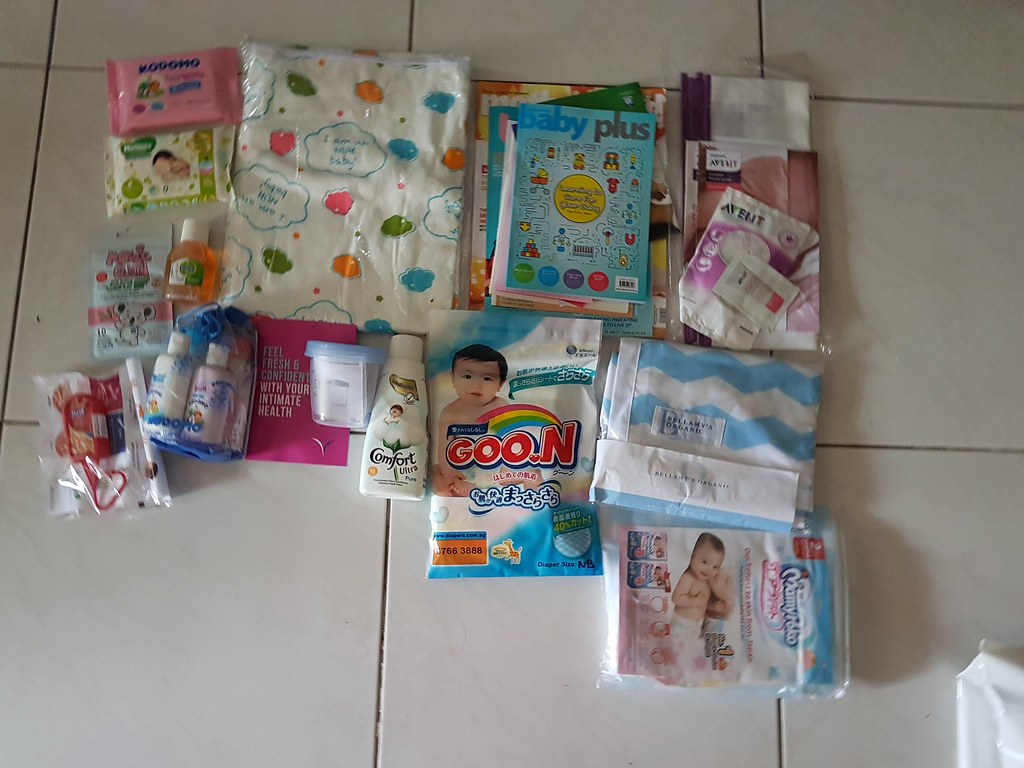 What to Pack in your Hospital Bag

Available in the ward: