Moms usually write their birth experiences very shortly after giving birth, but because I’m unfashionably late, here’s what I remember about that fateful day I first met my daughter a year ago.

I was 39 weeks, 3 days pregnant and rushing out a difficult Korean to English patent translation (Composition of Portulaca Extract and its Anti-Obesity Effect -_-). I knew I would surely miss the deadline if Elise came out before I finished translating the document, so I told her to “come out after I complete my work”.
Strangely or miraculously, she listened because my tummy started to hurt after I clicked “Send”. My pregnancy was extremely smooth. I had no problems eating (except for the first trimester) and she never ever kept me awake at night so it was my first disrupted sleep.
20/10/2015, 5.30 pm
I continued to hurt throughout the night and throughout the morning so I called the nurses at the delivery suite who told me to come down for a checkup. When I reached the waiting room at NUH, they checked and said I was only 3cm and I could choose to go home or be warded to wait it out. It felt like the worst menstrual cramps ever, like an invisible hand was wringing my uterus and it lasted for about a minute, fading away before the next wave.
The next time they checked, I was 5cm and the staff whooshed me to the delivery suite. Along the way, I heard chilling screams from other women in labour and got a bit frightened.

I was first given laughing gas to take my mind off the pain. Laughing gas makes you feel floaty and high like your soul is floating, but the effect is short so it’s not a painless option because you feel the full pain in between. It’s actually a legal high.
20/10/2015, 8pm
After an hour or so, the nurses checked again and this time, I was 9cm and the nurses went into alert mode. One of them reached in, broke the water bag and exclaimed “IT’S GREEN! THAT MEANS THE BABY POOPED INSIDE! PUSH NOW!” Apparently, it is dangerous if fetuses pass meconium in utero during delivery because there’s a chance of them ingesting it. If so, they’ll have to do an emergency C-section to get the baby out ASAP. They noticed that Elise’s vitals were constant (meaning she didn’t swallow her poop) so they allowed me to continue pushing.

Other than breathing in the laughing gas like crazy, I kept rubbing my feet against the sheets to take my mind off the pain.
I huffed and I puffed and I squeezed. Pushing the baby out actually feels like doing a big poop. My husband who let me squeeze his hand was SO worried I would die because I was tired and couldn’t reply to all his questions so he kept talking to me non-stop – “Can you hear me?! Please reply! Talk to me! I can’t live without you!”. Korean men are so dramatic.
The medical officer (subsidised patients can’t choose their gynaecologists) was preparing for an episiotomy when I shouted out “No no no noooo don’t cut!”. It’s common practice to cut the vagina to allow for a bigger opening. So he listened and at one point, they could see her head and asked if I wanted to touch it. I don’t remember if I felt grossed out or too tired but I didn’t.
After a few more pushes, I heard a cry and did a few more pushes to deliver the placenta, which the nurse asked if I wanted to dabao (take away). Err, no thank you. Luckily, I didn’t tear much and only needed a few stitches.
The First Meeting
When the nurse carried her to me, the first thing I said was “Hey! She has a dimple!”. I didn’t cry or particularly feel overwhelmed by emotions though. I also noticed she came out really clean! I guess drinking coconut water really helped in “cleansing” the baby. 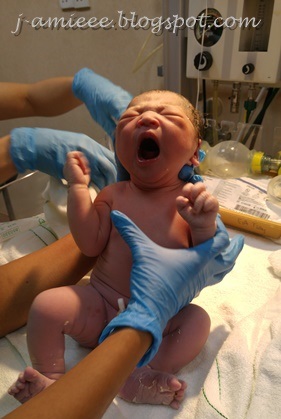 We were left on our own for about an hour for skin-to-skin where she wriggled around and did a breast crawl. It’s where the newborn sniffs around and latches by herself. Afterwards, we were pushed into the ward for a rest.
The stitches didn’t hurt much so I didn’t even need painkillers. I’ve always liked babies so I was fascinated about her every movement. Newborn movements are jerky and sudden. They don’t so much other than eating, sleeping and pooping. They also can’t see very well so they tend to stare at you quizzically with furrowed eyebrows like “But.. who ARE you?” and that’s when you tell them….
.
.
.
“I am your mother”. 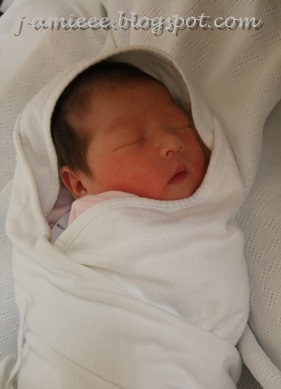 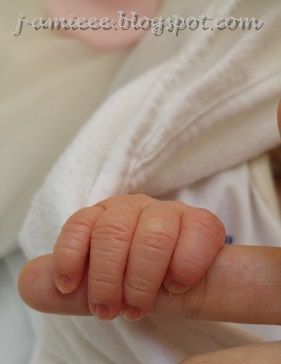 One Reply to “Elise’s Birth Story”