We have managed to reclaim our bed back from Elise and sleep quality has been so much better for all of us. She now has her own space to do her sleep Taekwondo. Sometimes, I feel sorry for not being there for her in the day and snuggle with her inside her play yard anyway.

It was last Monday, in the deep of the night, that I realised she was burning. Checked her temperature and it read 38.1 degrees. :O She has ever only fallen ill once before, so I was quite worried. I read from somewhere that lemon baths helped to bring down temperature, so I immediately woke my husband up and we went to get some lemons from the nearby supermarket.

We undressed her and put her in the bath but she hated every second of it, which was really unusual because she’s a water baby. Then again, I wouldn’t like it either if I was unceremoniously dunked into a pool at 5 am in the morning when I’m feeling feverish.

When the morning came, I was quite reluctant to send her to the PDs near my place because according to my mummy friends, both prescribe medicine freely (and probably unnecessarily) and another one charges first time consultation rates if the baby doesn’t go back for consultation within 3 months. Way to go.

We continued sponging her with wet towels and did two more lemon baths. Her temperature maintained at 38 degrees but she was still active and thankfully, latching. I just clung on to the belief that my breast milk would create antibodies to cure her and gave her lots to drink. 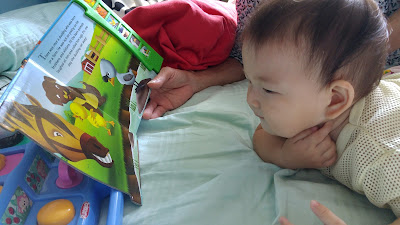 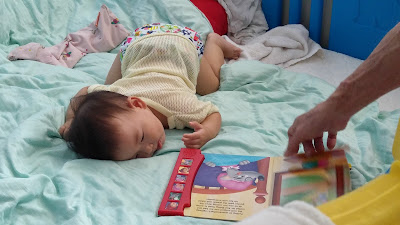 She spent her day confined to the house and only went outside along the corridor instead of going downstairs around the neighbourhood in her stroller. Part of her typical daily routine involves going downstairs and mingling with the other babies in the neighbourhood. She has a little boy friend named Jayden and they both wave to each other excitedly when they spot each other in their prams Hehehehe.
When she became extremely whiny, I took out a special treat for her – a frozen breast milk popsicle. Look at that smile! The best thing is, her fever subsided by the evening and she was totally well by the next morning. We did feed her 5ml of liquid paracetamol given by the polyclinic, but I’m guessing she recovered quickly due to adequate hydration, antibodies from mommy’s milk, sponging and most importantly, extra TLC. 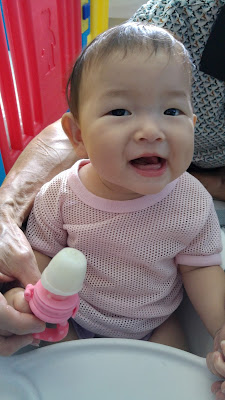