I’ve been a mother for close to 5 months now and it has already been a tremendous ride. I’m so blessed that Elise is easy to look after – she drinks her milk well, sleeps well, rarely cries, laughs a lot and generally doesn’t cause us much worry. 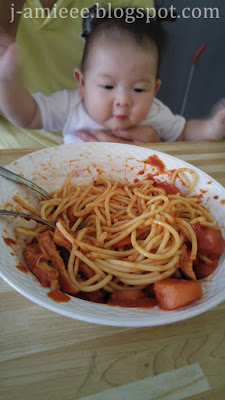 She can play quietly by herself in the cot without making noise and sit in her swing while we have our dinner for about 10 minutes. Once, I was using the computer and assumed she was sleeping. When I turned around, I saw her propping herself up in a tummy time position, staring at me quietly. It actually creeped me out a bit because she was so silent.

At a tender age of 5 months, she has gotten herself into a fair bit of trouble. Just a few days ago, I was carrying her whilst using the computer when she suddenly flung and smashed my cup full of orange juice onto the floor. 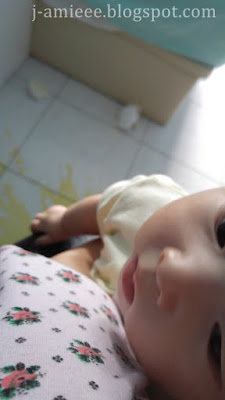 Then she made a face as if to say, “That’s what you get for ignoring me”. 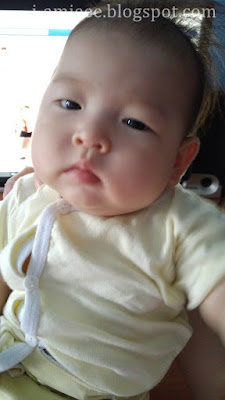 This evening during her bath, she also slipped underwater for a second and drank a mouthful of bath water, (no) thanks to her father who insisted that she would be able to sit upright in the bath tub without support. She kicked and splashed, leaned back and slipped into the water. Of course, we immediately took her out, soothed her and now I have one win over my husband. “Told you to listen to me, right?”

We also bought her a small swimming pool which she hasn’t learnt how to use properly yet. She does this instead: 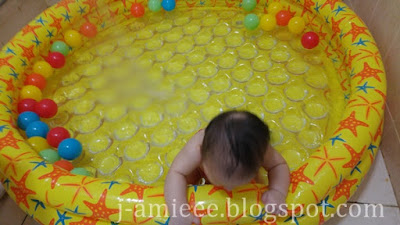 She makes us laugh a lot and we have definitely been a lot happier since she came into our lives. For one, my father smiles a lot more now and there seems to be more motivation for him to live.

Before she was born, I don’t think my dad and I had too many interesting things to talk about – I’m not really interested in stocks and shares and he tells me about neighbourhood news like how the uncle living in our block has an unfilial son who made him pay money for a broken computer and how the neighbour’s daughter-in-law is pregnant. We make each other bored. 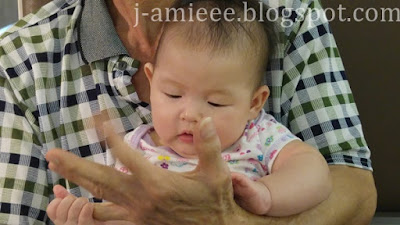 Over in Seoul where her paternal relatives are located, I hear they are only too excited to meet her. Apparently, many good things have happened since her birth, like a rise in the price of their land and a promotion. When I asked if they would attribute the recent bad event to her existence, my husband just shrugged me off. Only believe in the good things. 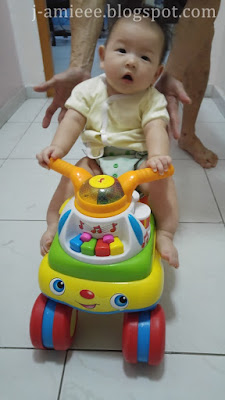 Having a child distanced me from most of my childless friends. I can see why. Impromptu and spontaneous overseas trips which were a leave application and flight booking away have now become unthinkable. Late night chill out session at a bar listening to live music? The best place to chill out is at home now. Even weekday dinners are extremely difficult to commit to.

On the bright side, some old friends came back and it made me realise how certain friends have been with me through all the ups and downs. I’ve also made more new friends, but unsurprisingly, most of them have children. I suppose it’s like what they say – birds of a feather flock together. It’s just easier for mummy friends to understand terms like BLW, MOTN, SIDS, DL, FM (not the radio frequency), EP (not a record), LO and talk about the colour of baby poop and brands of baby carriers and bottles.

Everyone joins a band in this life. You are born into your first one. As life goes on, you will join other bands, some through friendship, some through romance, some through neighborhoods, school, an army. Maybe you will all dress the same, or laugh at your own private vocabulary. Maybe you will flop on couches backstage, or share a boardroom table, or crowd around a galley inside a ship. But in each band you join, you will play a distinct part, and it will affect you as much as you affect it.

When I announced my pregnancy, I had a (now ex-friend) friend comment that it was a very bad choice to have a baby because my career was non-existent and I was not “stable”. I was so worked up arguing through WhatsApp with him. That’s why he was kicked out of my band.

I don’t regret it one bit, for the littlest member of my band welcomes me home like this every day: 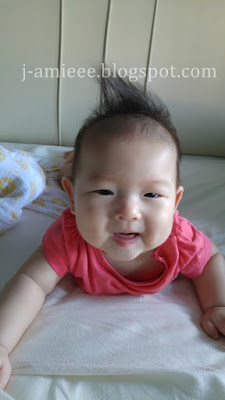