I brought Elise out alone for the first time to meet my other mummy friends a few weeks ago. My husband was VERY concerned and asked if I needed him to accompany me but I knew I’d be okay, so I declined. I had to reject him more than once because he was so worried.

I packed the bare essentials (less bare than the other time at the dentist, for sure) into a tote bag:
and began my journey to the west town. It’s troublesome carrying a bulky tote (yes, it is bulky even without bottles and formula) and juggling a baby. I’ve been very lucky so far to have been offered seats in trains throughout my pregnancy and whenever I am out with Elise. 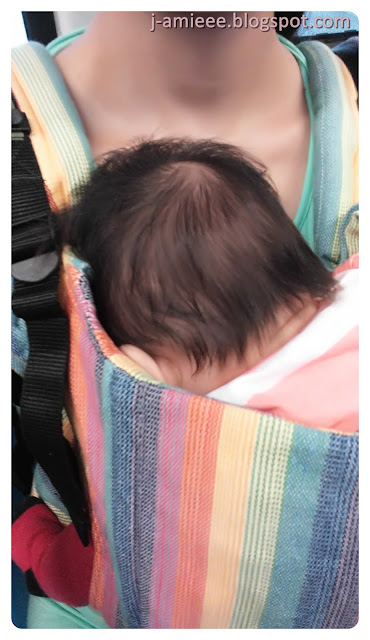 I fed her before leaving the house, so she slept through. At the restaurant, I put a changing mat on the sofa before laying her down on it where she continued sleeping so I could eat.
The other mummies ate whilst baby-wearing their bubs.
I’ve tried it once before in the food court where I had nowhere to put her down. It is definitely doable, but it’s really uncomfortable when there’s something in between you and your food.
She cried for milk in between, so I latched her under the cape. Benefits of breastfeeding aside, it’s just so. much. more. convenient to breastfeed because there’s no need to find hot water, make sure the temperature is correct and no bottles to clean. The downside is that your boobs become really droopy… ANYWAYS.
Some food got onto her clothes so I brought her to the nursing room to change.
We walked around the mall after shopping with our bubs all sleeping. At her next diaper change, she decided to pee right after I removed her diaper, so she had yet another change of clothes. I’ve learnt my lesson.
It’s enjoyable bringing baby out alone, but for now, I’d still prefer to have my husband around to carry the load so I can just concentrate on carrying her.

No comments yet
girls' day out