When I confirmed on the venue of Elise’s full month celebration, I started searching for full month gift box caterers. The most common choice is Sweetest Moments, but I’ve heard things about them, and my cousin with a deep passion for baking says the pastries utterly disappointed them.

Other caterers include Choz Confectionery (by Neo Garden), Papamama, Partridge Pear etc. I came across CooChiCoo which does score on packaging, but there is no way in hell I’d pay $10 for marshmallows, jellybeans and cookies in a mini metal suitcase.

Lulu’s won me over because of their affordable pricing, attractive boxes as well as the ease of use of their website and shopping cart. 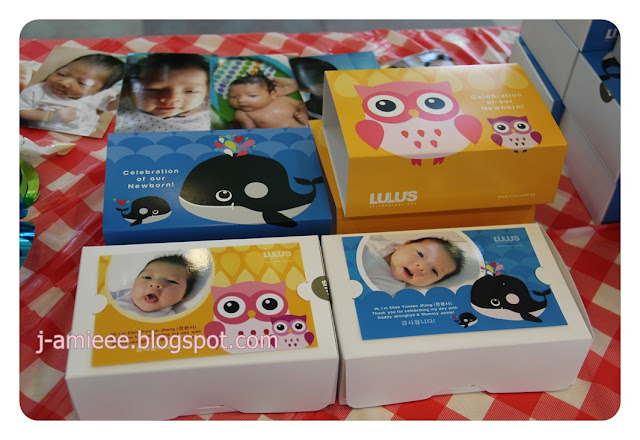 Lulu’s was started in early 2014 by a Singaporean couple based in Germany. Lulu’s is one of their many businesses. The couple started Lulu’s because they’d received full month cake boxes which did not deliver on taste and wanted to provide “tasty treats in pretty boxes”.
They have an in-house design team which updates the website and theme boxes regularly. Their recipes are also regularly improved. 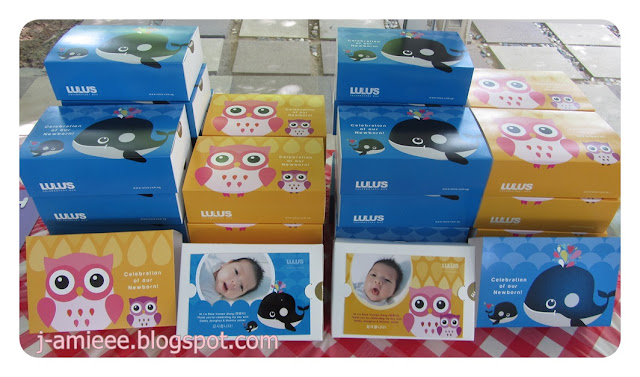 Ordering online was a  breeze. Other caterers show a picture which links to an email, or an order form. Lulu’s lets you choose the theme followed by the pastry selections and they also have Halal sets for Muslim friends.

Service:
There are a few email addresses to liaise with – one for ordering and one for the customisation of the photo card. It would have been much more convenient if the message and photo could have been customised on the website at the point of order. Anyway, they allow a one-time complimentary change of message and photo.
The time slot for free delivery was fixed between 9am to 1pm. I topped up $10 for delivery at a fixed timing because my event was scheduled for 11:30am. I figured it was worth paying $10 than having to store and carry the boxes to the venue ourselves.
Product:
I was rather surprised to see a pretty gift wrapped box delivered along with the order. They included a pretty long-sleeved tee for Elise as a Christmas gift! Little things like these make a difference to the whole experience. 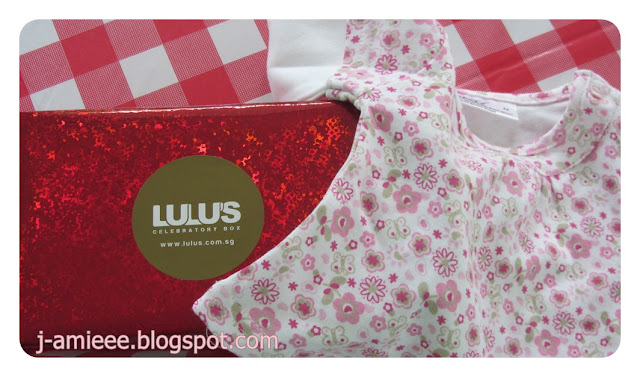 I chose the Owl and Whale design. The colours were very cheery and suitable for the occasion and their customised baby card is printed as a 4R sized photo. Other caterers have wallet sized cards with only enough space for the baby’s birthdate and other details.

They also use tortoise shell shaped ang ku kuehs for baby girls and pointed ones for baby boys in accordance with tradition (which I had no idea about before). 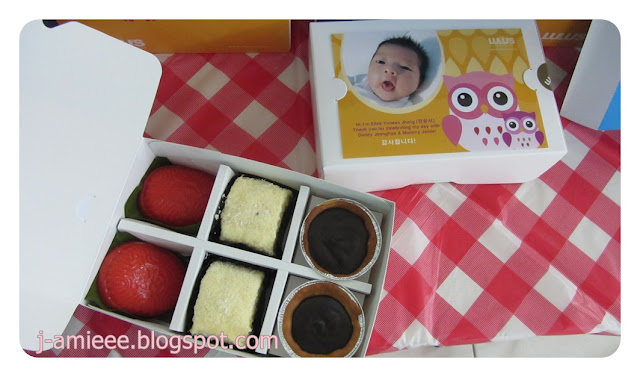 The dividers prevent the pastries from getting knocked around and they also had a cardboard base to prop up the chocolate tarts. Very thoughtful. I once bought a cupcake from Twelve Cupcakes and it got smashed up on the way home because the packaging couldn’t grip the cupcake properly. When you have a smashed cake, nobody cares whether you paid $3 or $30 for it.

My relatives commented that the ang ku kuehs were especially tasty, which was a relief.

I was left with 6 boxes because I forgot to personally hand it out to everyone and only remembered after half of the guests left. -_- So smart. It became my breakfast for 3 consecutive days.
Value for money:

There are a variety of boxes to match your budget. My budget was budget, so I chose the most affordable selections at $6.50 per box. Luckily, they didn’t look shabby PLUS they tasted good. Overall, I was satisfied with Lulu’s and would gladly recommend them.

*No monetary compensation was received. All opinions are of my own.

No comments yet
review support local