She’s beginning to smile more. She used to flash us a quick smile after having her milk, or a smirk which we could never have captured unless we recorded her every movement.
Since a few days ago, she started becoming very generous with her smiles. This video was taken in the train on the way home from town. I suppose she was enthralled by her surroundings and kept smiling so much, I finally managed to capture it on camera.
Level 100 achievement unlocked!
We brought her out today in a stroller for dinner and there was this auntie who lingered around the stroller, asking me how old she was, commenting how cute she was and THEN, she asked if she could touch her. I replied “No, you may not touch her”, before she walked off. At least she was polite enough to ask.
Babies don’t need to be 100% clean, but having a random stranger come up and touch (or kiss?!) my baby is a definite no-no for me. I wouldn’t know if she has washed her hands after using the toilet, or if she has just poked some fish in the guts at the mart.
I read an analogy online which I never realised until now.
“It’s the same as me going up to your husband and asking if I can touch or kiss him because he is cute. Now replace ‘husband’ with ‘baby'”. Same goes for pinching and squeezing of cheeks. It’s neither cute nor funny and it hurts.
In other news, I made pasta today! It’s tuna linguine with cheesy tomato Portobello.
I’m always cooking the same few dishes with the same few ingredients. Time to up my game. 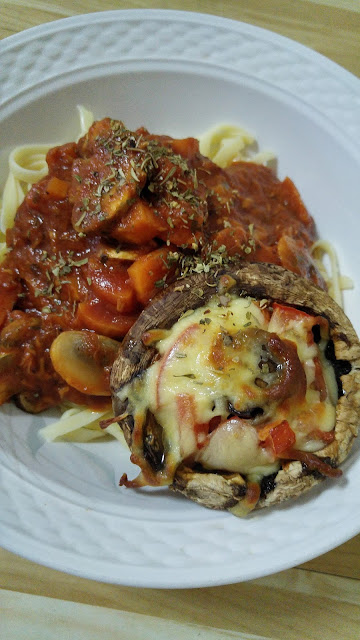