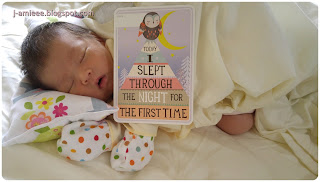 My baby has been sleeping through the night since a few days ago. She only wakes up when her diaper is wet and that is when we would change and feed her. She absolutely hates being wet and dirty. When she gets hungry with a wet diaper, she can’t decide whether she wants to suckle or if she wants to get changed first.

We change her dirty diaper and continue feeding her, but then we’d have to change her diaper again because she always does a poo after feeding. It’s quite hilarious but we already know her cues. Just yesterday, we changed three diapers in an hour.

I’m not sure if it’s because my baby is an “easy” baby, but this is how night-time is like for my baby. The timings are estimates which vary daily, but the routine is generally the same:

Baby E’s Night time Routine
11pm: Feed her until she is full.

I do this by latching her until she totally stops sucking. Direct latching is hard work for babies and they do need a rest. When she has drank for about 15 minutes on each side and her lips purse up tightly even though my nipple is right at her mouth, that is when I know she is full.

She also falls into a deep milk coma and has the floppy arm syndrome. That is when I’ll try to burp her. If I can’t burp her, I’ll pass her to grandpa who has the patience to sit there and pat her back for 10 minutes.

As my baby usually does a wet fart during her feed, her diaper will more likely than not be poopy right after a feed. We change her and apply some virgin coconut oil to relieve her diaper rash.

I’ve also stocked up on Merries and Huggies as I’ve heard these brands are more absorbent and don’t cause diaper rash. Let’s see how it goes.

She falls into a milk coma after her feed, but a diaper change and burping makes her somewhat alert so we soothe her back to sleep. This takes anywhere from less than 5 minutes to about 30 minutes.
To make her feel extra secure, I swaddle her as well.

Sometimes she makes little dinosaur noises but most times, we wake her up to feed before she starts crying. We’ve managed to preempt quite a number of cries with this method.
Definitely do not want to be that neighbour with THAT noisy newborn which cries nonstop in the dead of the night.
5:45am: Check diaper, latch or feed EBM

She then sleeps till about 8am before we bathe and feed her. The feed-burp-diaper change routine then repeats itself till the night.

There are a few precious moments of time in a day where she is fully contented (fed, diapered, burped, cuddled) and she is just quiet and active, absorbing in her environment like this: 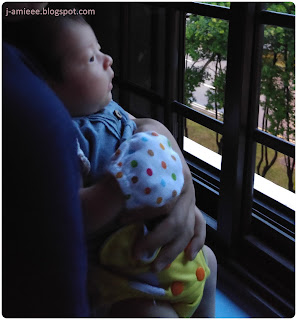 …and my world is perfect again.