We revisited Sandy Dandy yesterday with a new Korean friend I made. It has changed significantly since our last visit. The wooden caravan is the newest addition and some toys have been shifted in. The entrance is a bit too high for younger toddlers like Elise and she had to plonk the top half of her body on the floor before wriggling up. A step would help smaller kids get up and down easier. 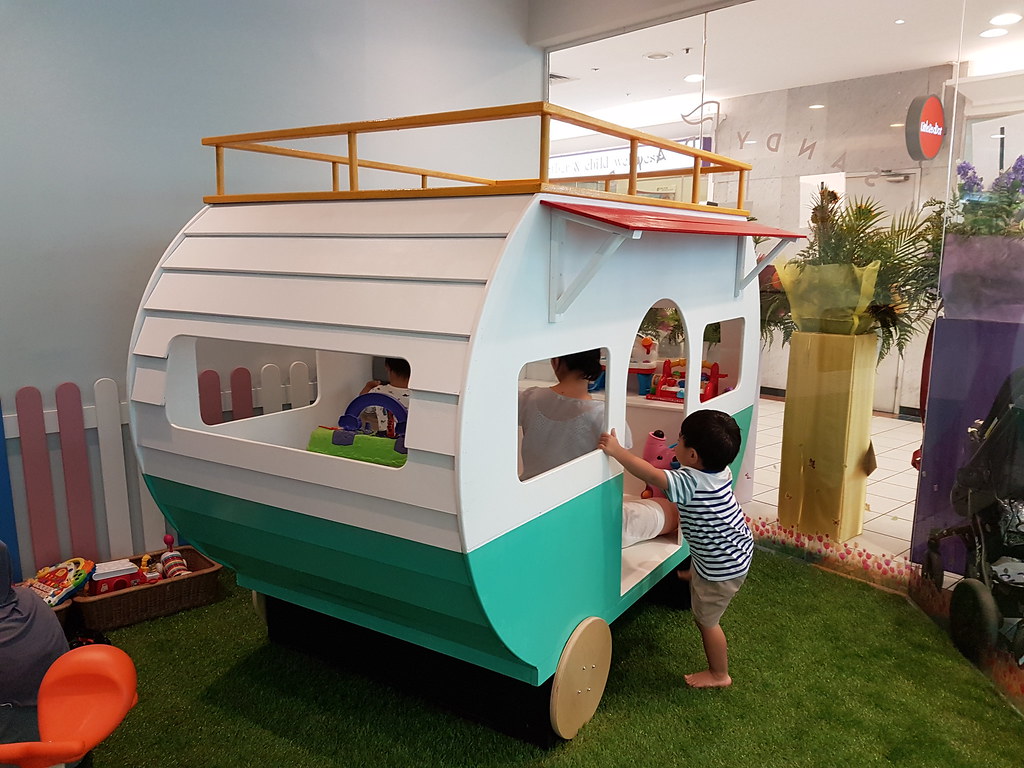 The shelves have been decorated with items from All Things Felt (which are also for sale). The colourful felt ornaments add more vibrancy to the place. Handcrafted by underprivileged Nepalese women, every product you buy empowers them to continue creating crafts to support their families. There’re name banners (pre-order only), pen toppers, cot mobiles, bags and even rugs. 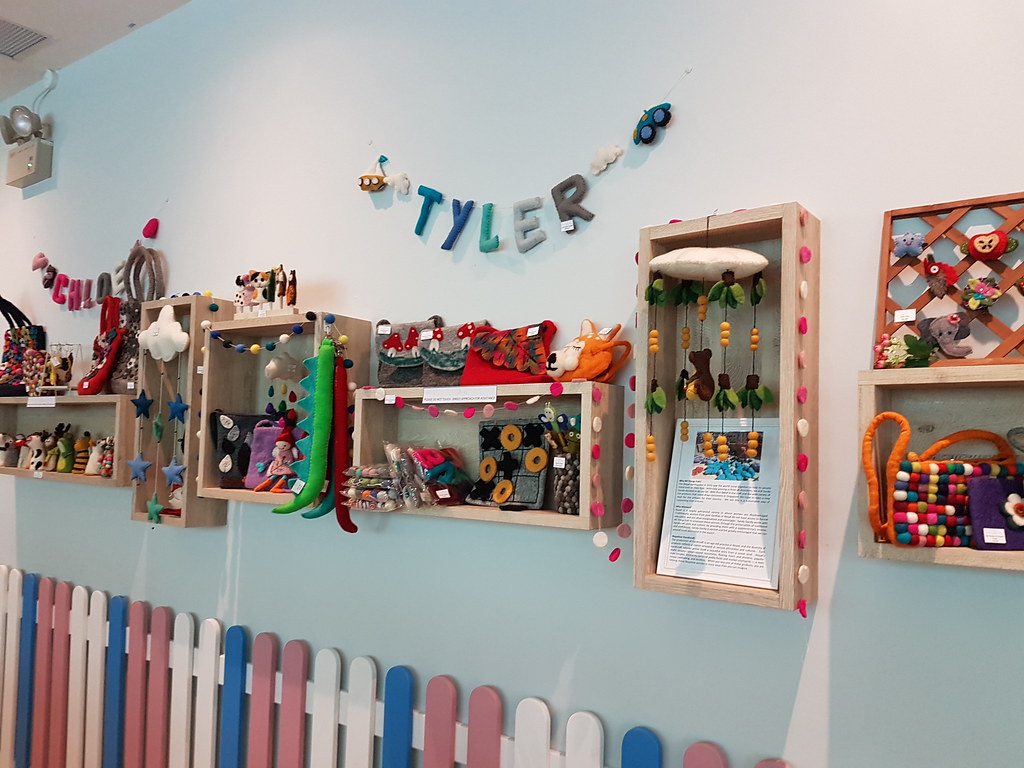 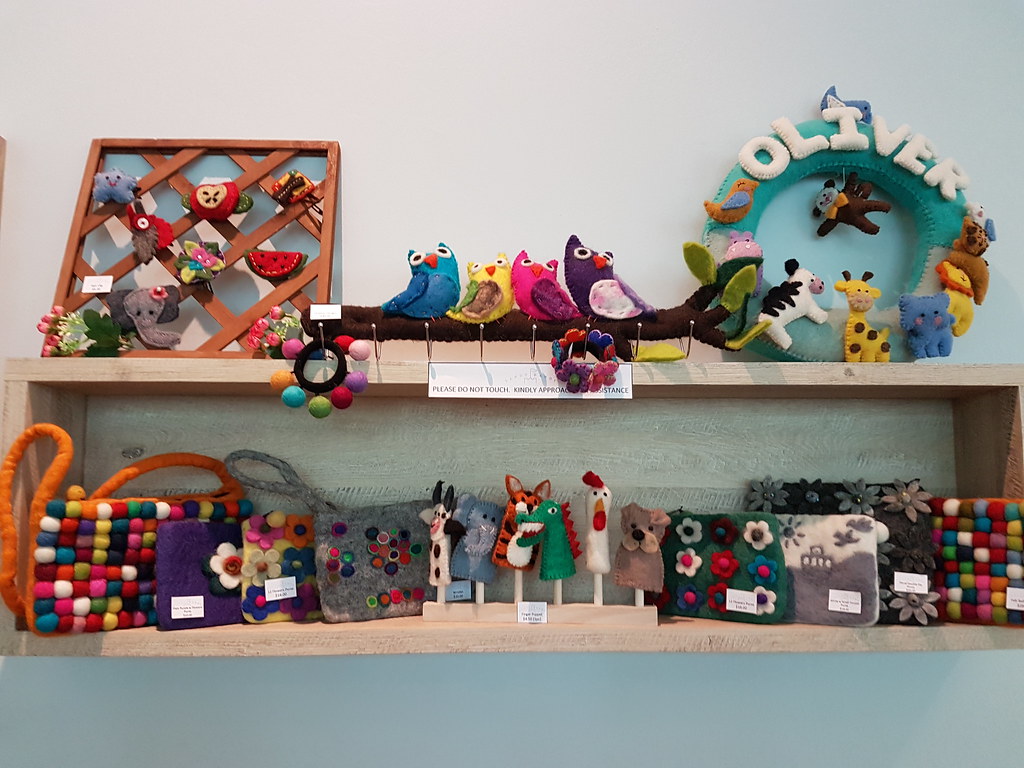 Elise with her oppa. He’s a well-mannered and slightly shy boy who took good care of Elise when they were playing together even though Elise couldn’t really reply to his questions. The see-saw is a new addition as well as it wasn’t there when we last visited. 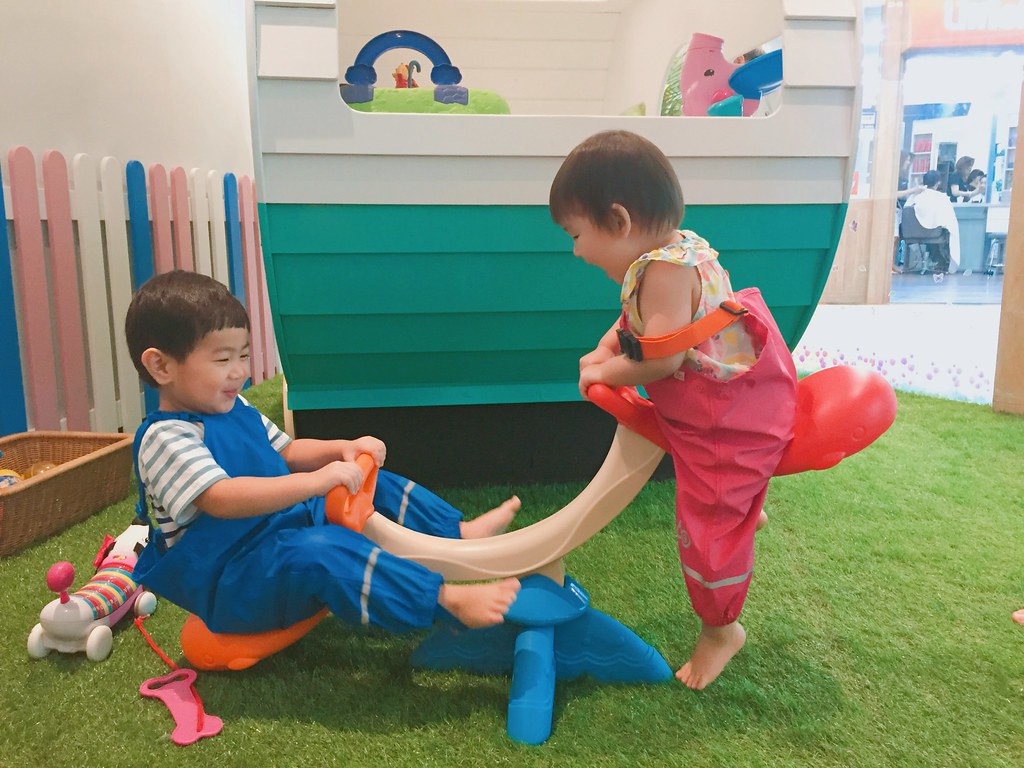 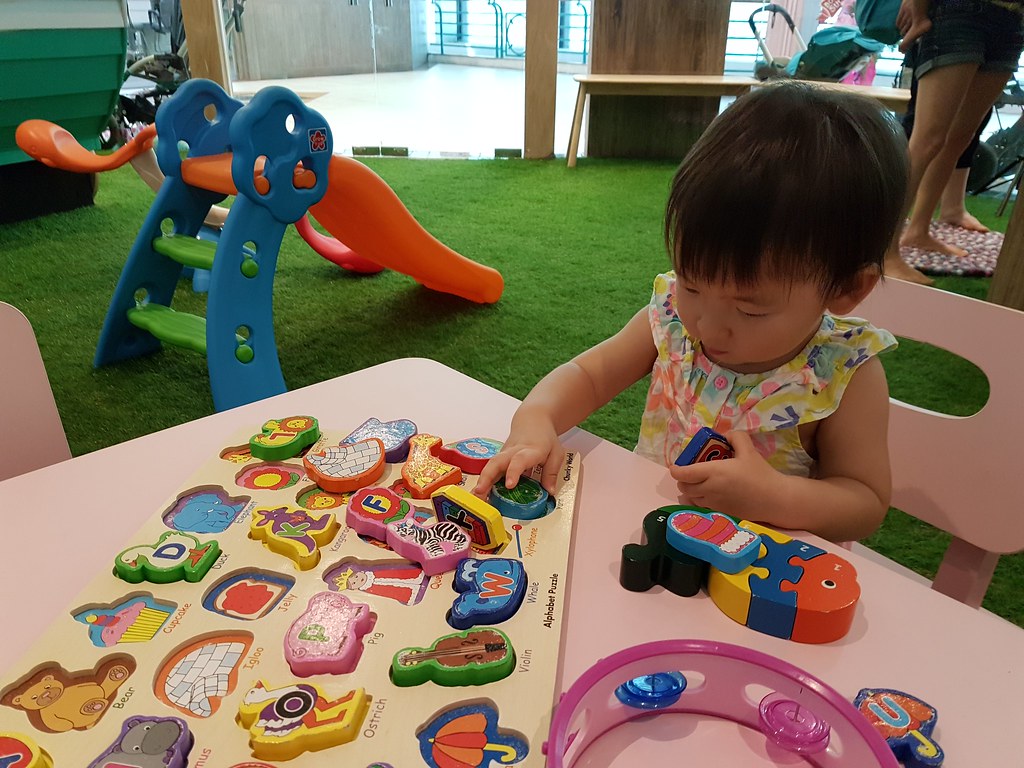 In the sandpit. It was a Friday and the area was packed. Jennie says that it’s best to come on Wednesdays and Thursdays to avoid the crowd. In spite of the limited space, the kids found their own corner and did their own things. Other than another Korean boy who tried to snatch a toy from Elise, we didn’t notice any kid fighting or bad behaviour like pushing or taunting. 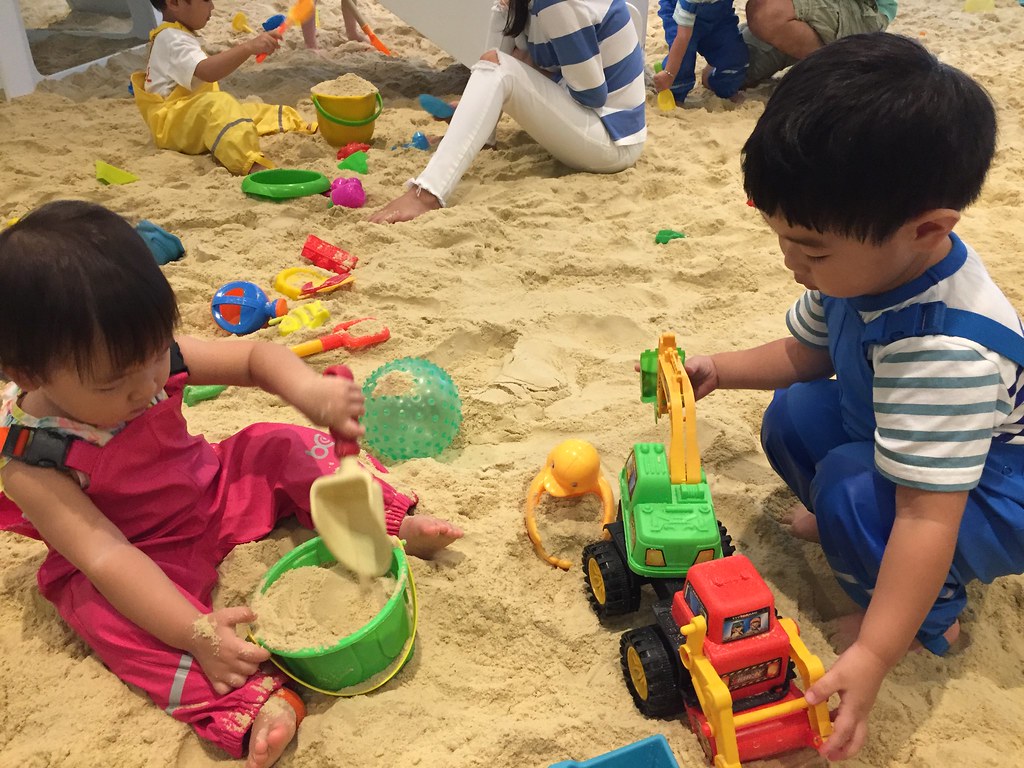 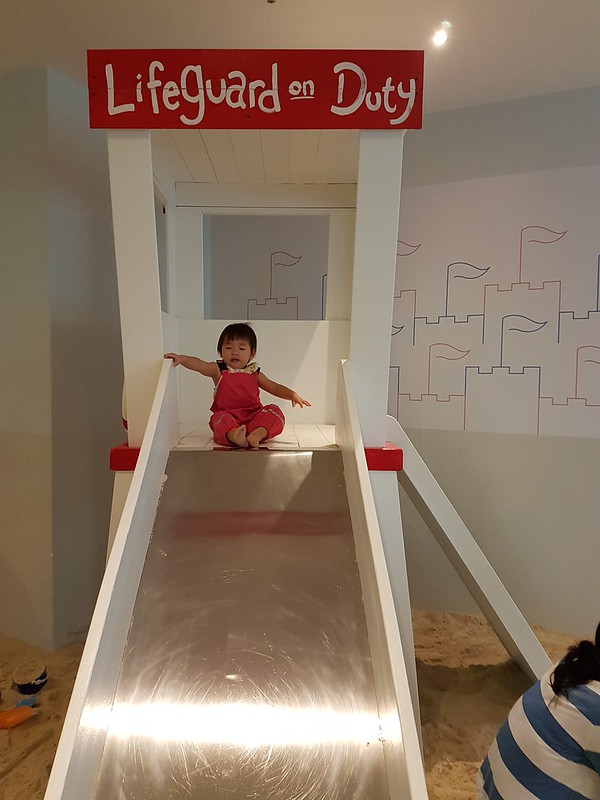 We spent about 3 hours there from 3pm to 6pm. The menu has been updated to include main dishes like chicken lasagne in addition to hot snacks (chicken nuggets, fries, wings, chicken sausages) which are all air-fried or microwaved.

Most parents left around 5pm, leaving the sandpit empty for us to enjoy. I’m glad they liked the place. You know how it’s like when you feel responsible for suggesting a venue to ensure a fun date? I had nothing to worry about because when we were walking out of the place, YJ (the little boy) kept telling his mother over and over that he wanted to go back to play. Overall, it’s a great place for some peace and quiet as you can sip on coffee or do your work whilst keeping an eye on your kid in the sandpit through the full length glass windows.

*ORIGINAL POST 7/4/2017*
Elise finally met up with her buddies Matty and Hana after a very long while. This time, they explored a newly opened indoor sand playground! 🙂 After a challenging lunch with the toddlers, we walked over to the Forum. Like most indoor playgrounds, there are temperature checks conducted upon arrival. We each received a guest card which was meant to record our purchases at the cafe so we only needed to pay all charges upon exit. 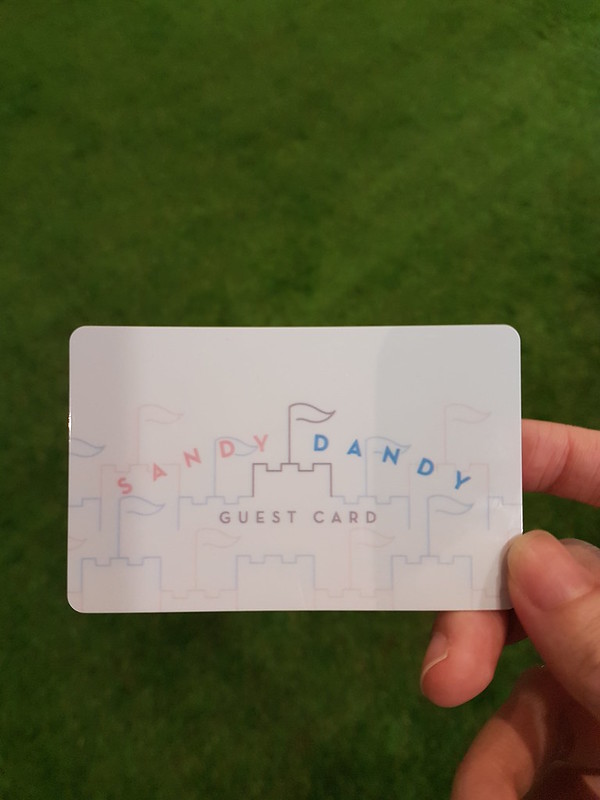 A mini play area with various toys for the kids to entertain themselves with. The toddlers spent a lot of time here before even venturing into the sandpit! I spoke with Jennie, the owner of Sand Dandy about how the idea was formed. She wanted a safe space with actual sand for children to play in. As a mother of two young children herself, she put extra thought into the design of the area, ensuring that it was safe enough. Most of the items are customised as she wanted the edges to be rounder to protect the children. 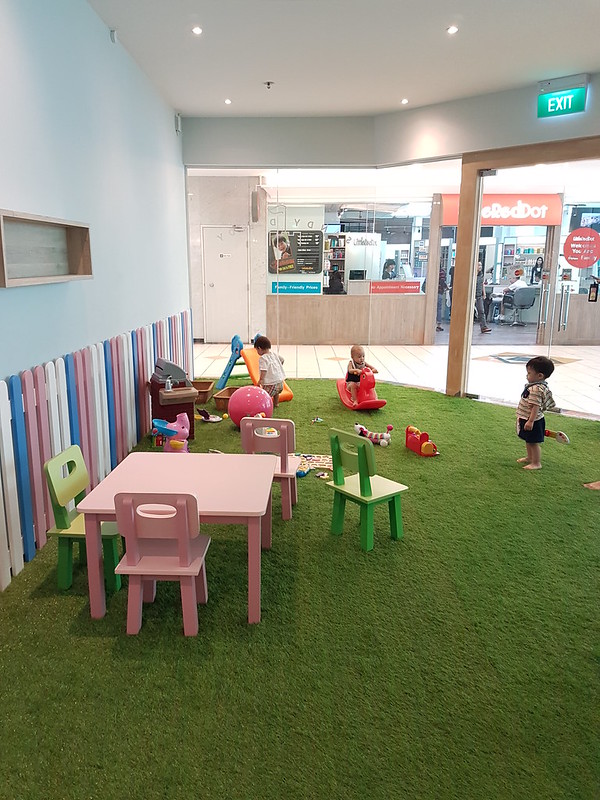 The empty shelves on the side will eventually be stocked with handmade felt toys crafted by disadvantaged women. Jennie was approached by various baby product distributors but chose to showcase something less generic yet suitable for children instead. 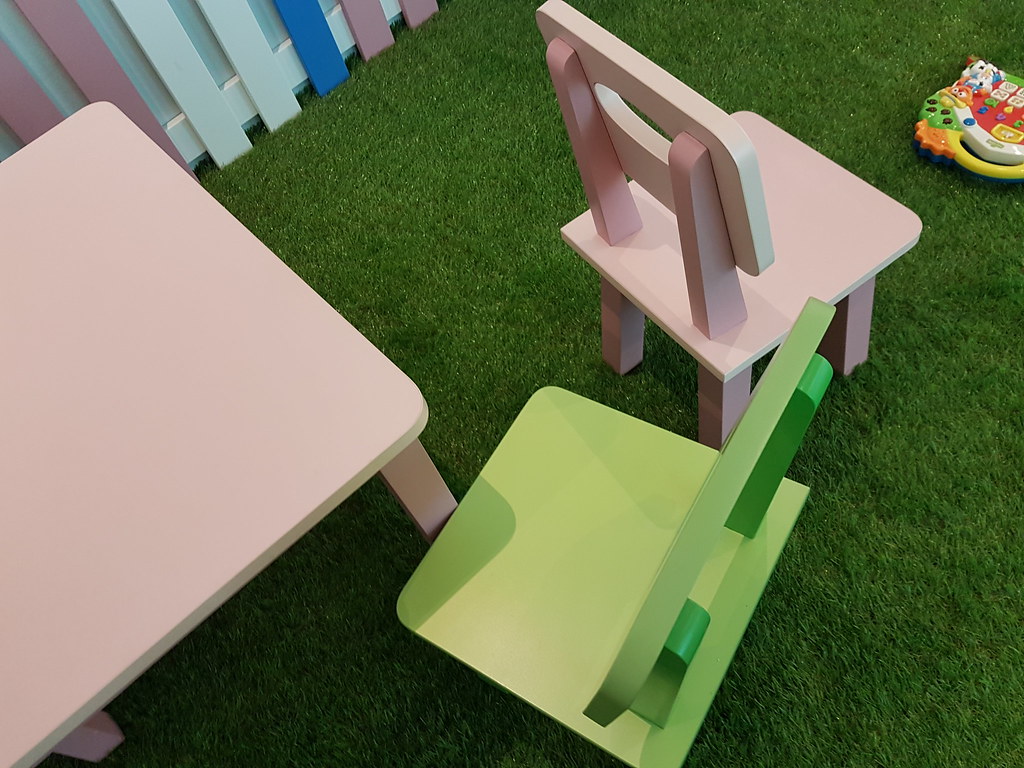 Ample seating space with benches and tables. The space is open for event bookings as well, so you can consider holding your kid’s birthday or full month over here. 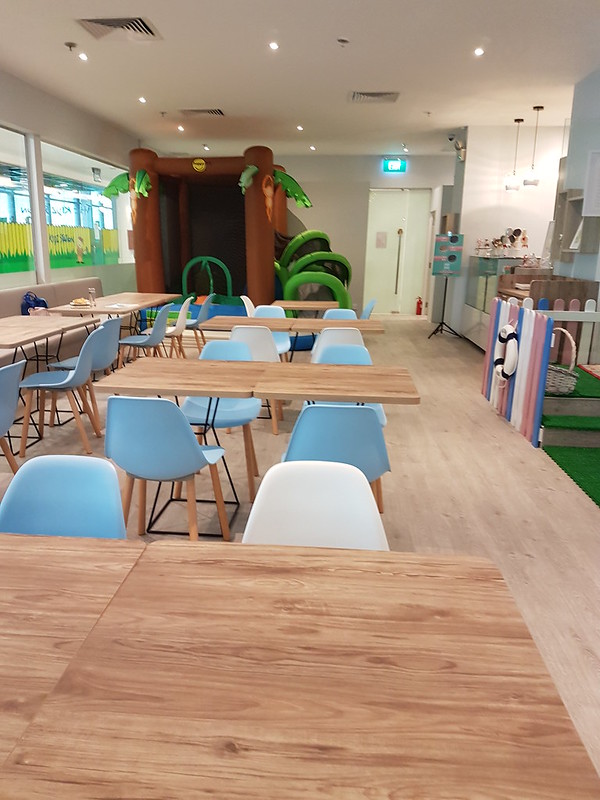 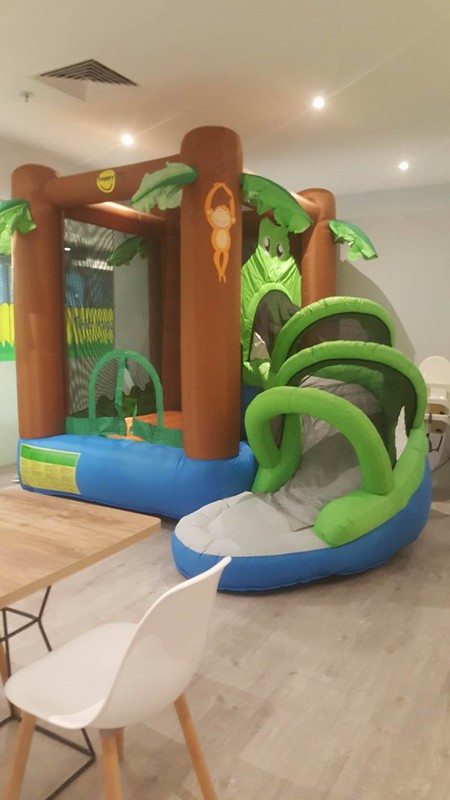 Spot the bouncy castle at the back of the cafe? Elise wailed the moment she saw it so no go. We did spot a few other children using it though!  The cafe stocks a wide variety of desserts like cake pops, push pop cakes, jelly cakes and pies in addition to hot snacks which are only either air-fried or microwaved. They order their supplies from a local baker and currently do not make desserts in store. 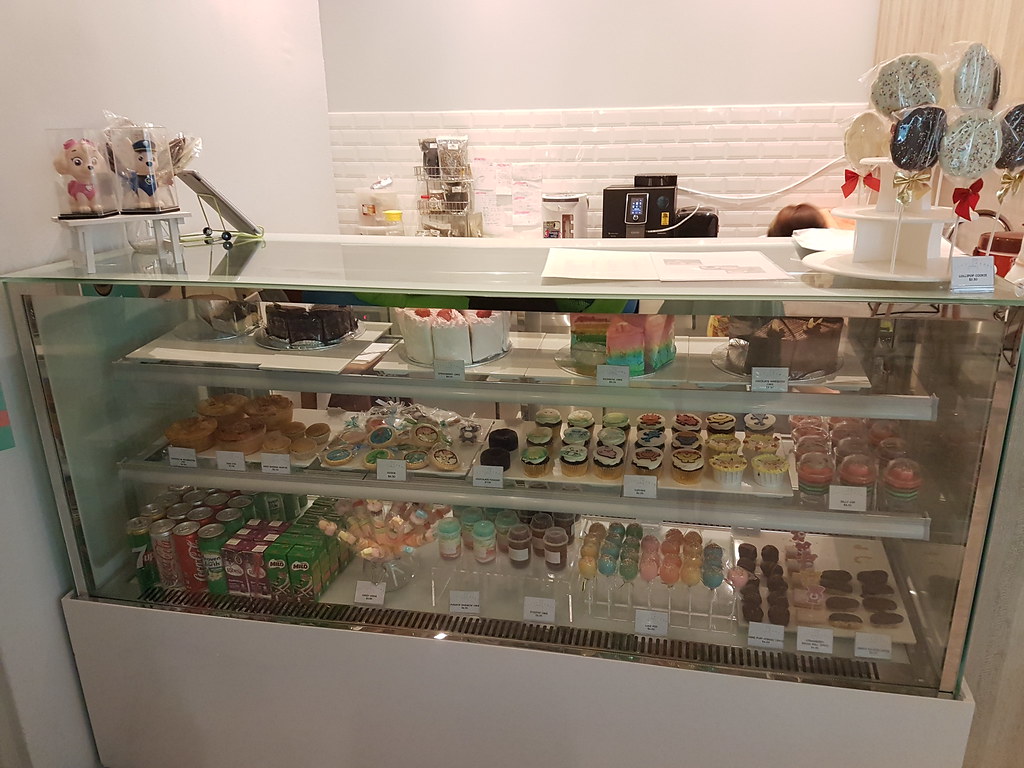 A jelly cake, icing cookie and Pokemon chocolate cupcake. The cupcake was a bit too dry and crumbly for my liking but the jelly cup suited my tastebuds. 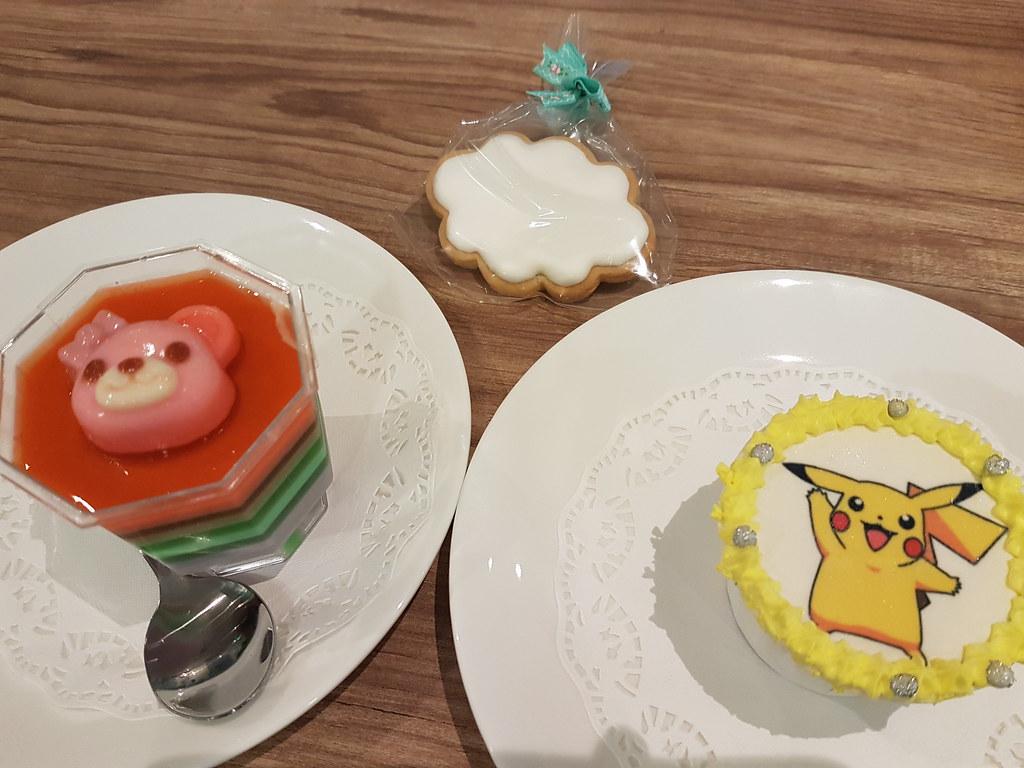 There’s no attached bathroom, but there’s a baby room for diaper changes with an armchair for nursing in privacy. I felt this was quite a thoughtful idea because not all indoor playgrounds have such a facility. It’s still quite bare and work-in-progress at the moment, but Jennie is doing most of the work herself! It’s a commendable effort. 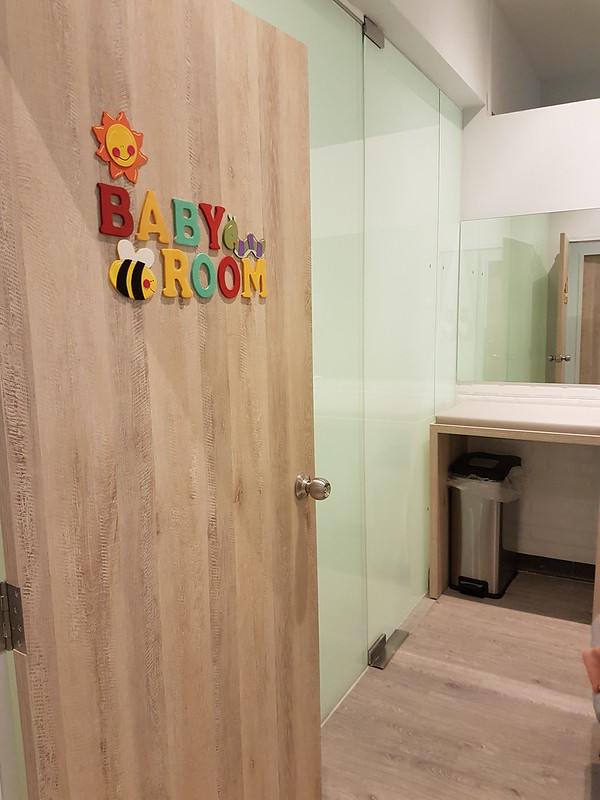 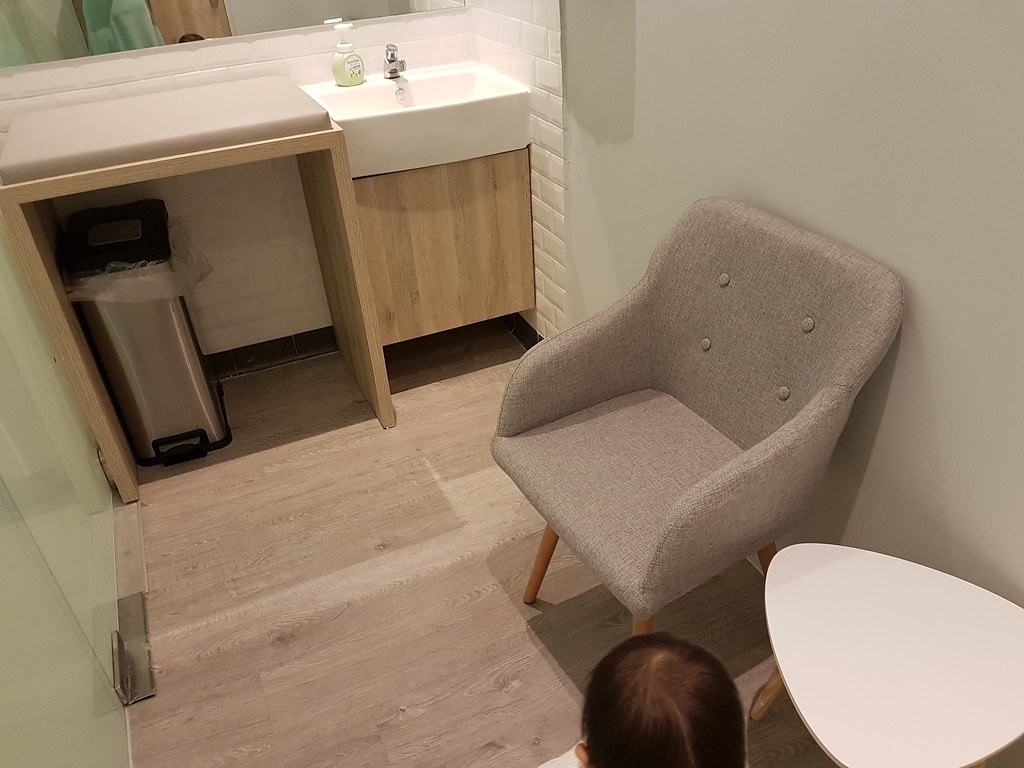 Our kids, still stuck at the kiddy play area. 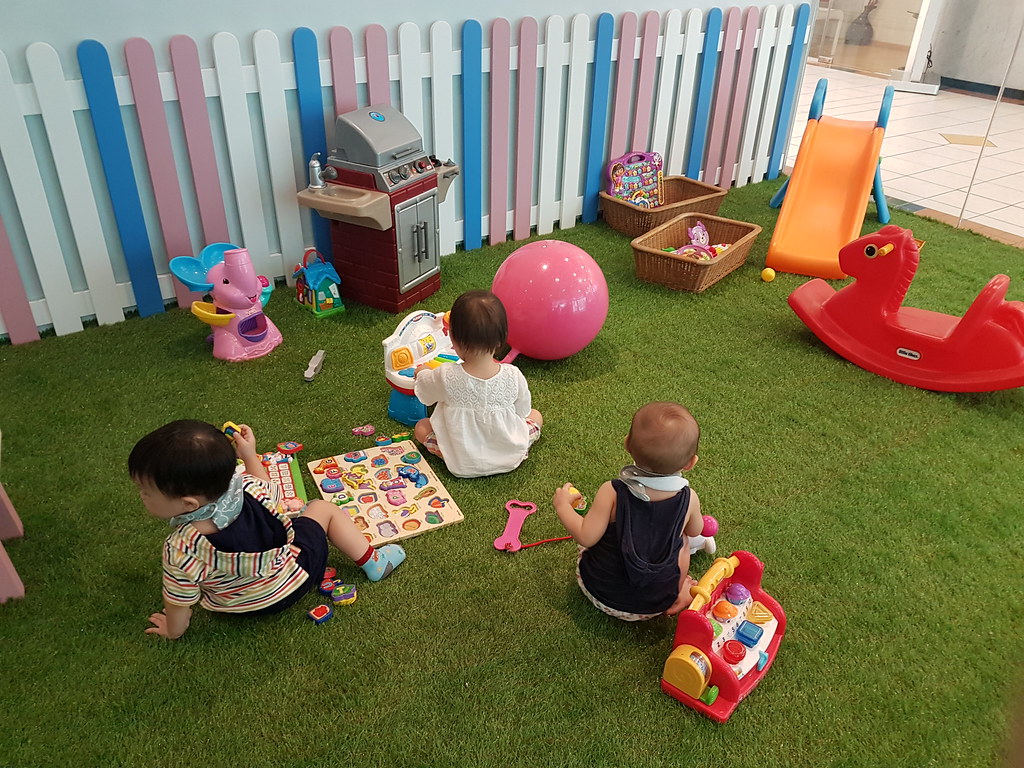 This Grow’n’up slide is about the same height as the one we have at home but is steeper so the kids swoosh down fast! I wish I got this instead of my boring slow slide. Thankfully, the kids mostly played by themselves and we only had to break up one fight between Matty and Elise at the end. 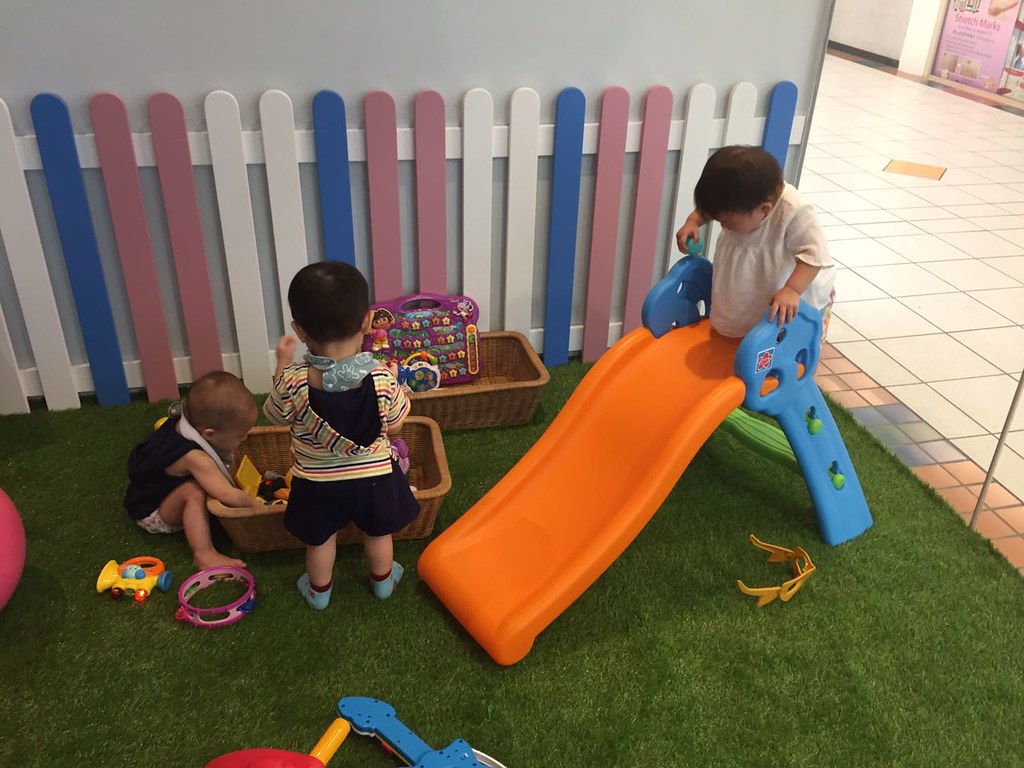 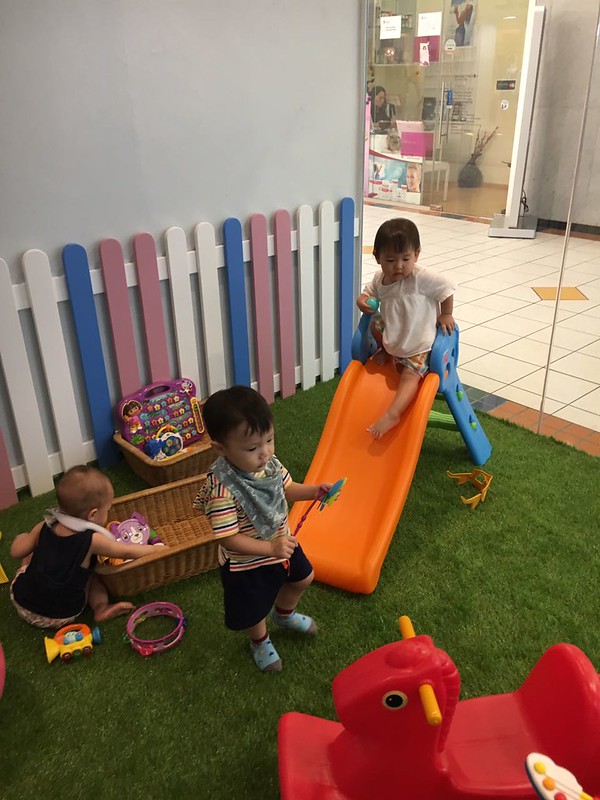 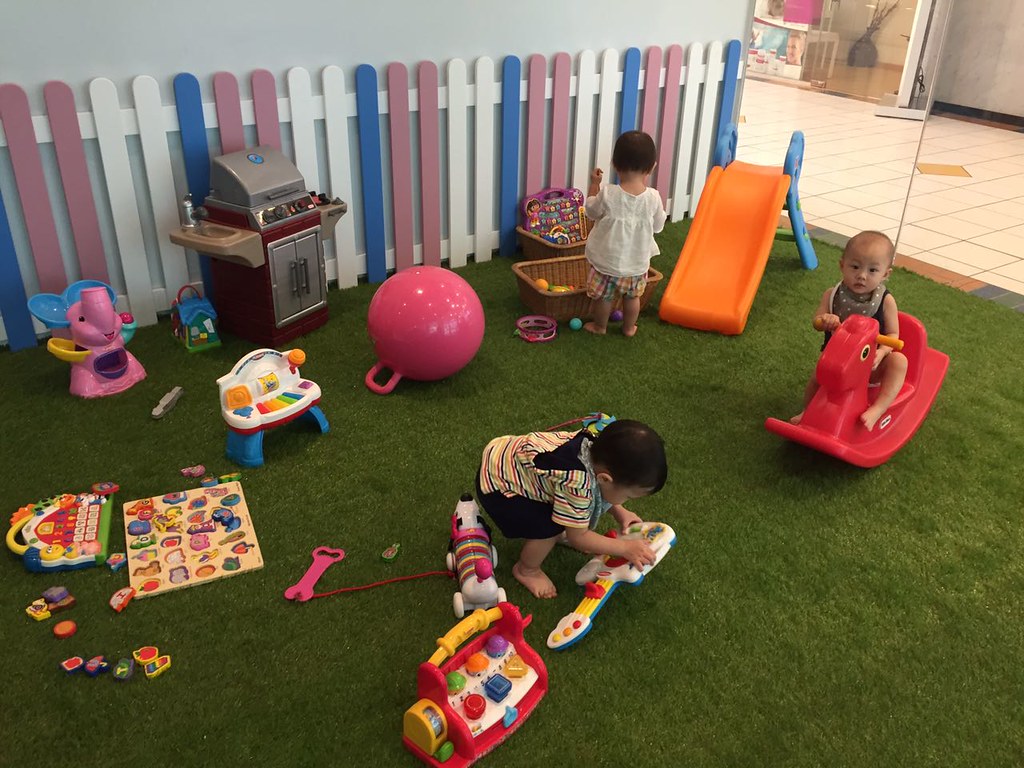 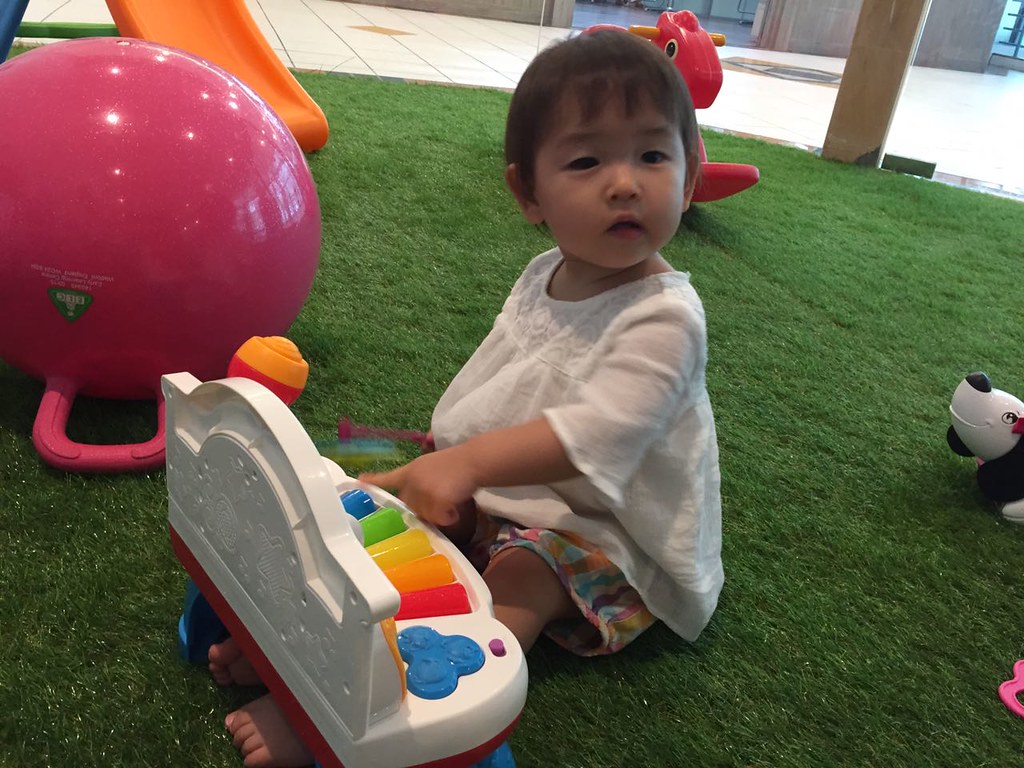 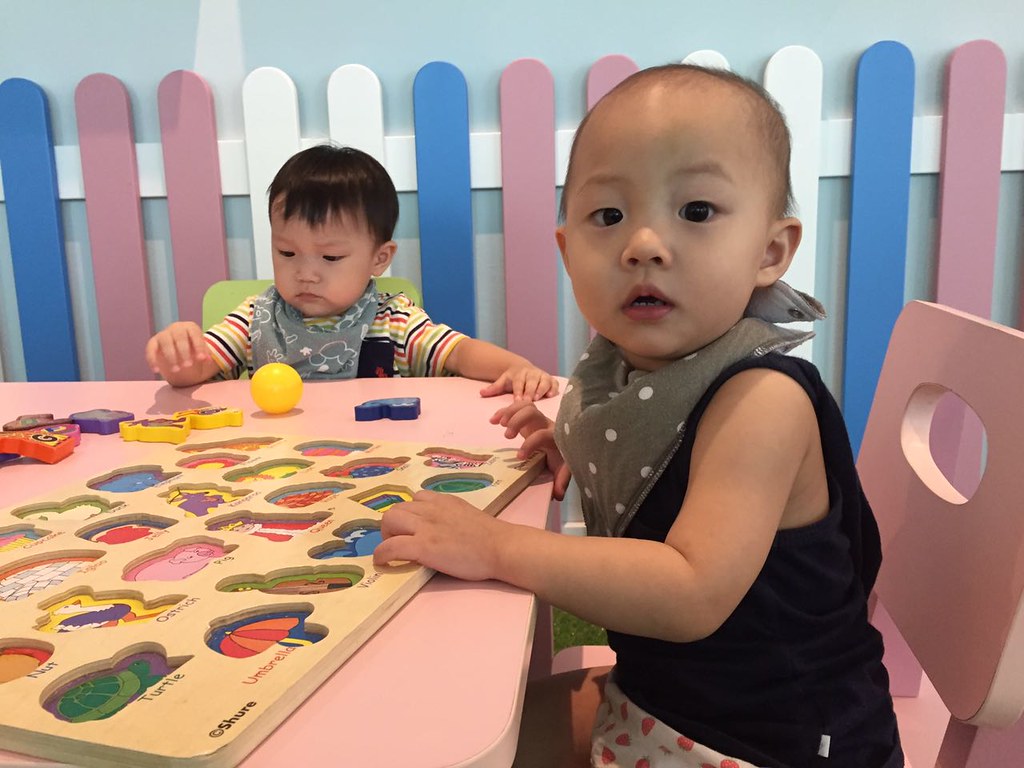 The highlight of Sandy Dandy – the sand pit! The wooden boat and lifeguard post with slide is also custom-made so you won’t find it elsewhere. Occupying an entire shop unit of space, the sand pit contains play sand from Mothercare and near the front, kinetic sand. The sand is sooooooooooooooooooooo soft, it’s like being at the beach except you’re likelier to touch a sand toy instead of a used cigarette butt or plastic bag. No bugs over here too!
It was a therapeutic experience for me. We’ve been to playgrounds which use cassia seeds in place of sand and while those weren’t too bad as well, nothing beats an actual sandpit. I used to make sand cakes at the playground with sticks for candles as a kid. Except now with kinetic sand, you can make your cake and CUT IT! The front part near the entrance is packed with kinetic sand and the play sand fills the rest of the pit, so it’s not exactly a mixture.
Sand is flipped every 3 days and 100kg of new sand is added monthly as part of maintenance. If your kid soils the sand, take note that you’ll have to pay for sand replacement! The sand toys are santised daily too.
Her thoughtfulness extends to the quality of sand toys used in the play area. Most of the toys are made in Germany at a higher cost than usual and while she did buy some from Taobao, she refused to use those which did not pass her mom-standards. No flimsy plasticky toys over here! 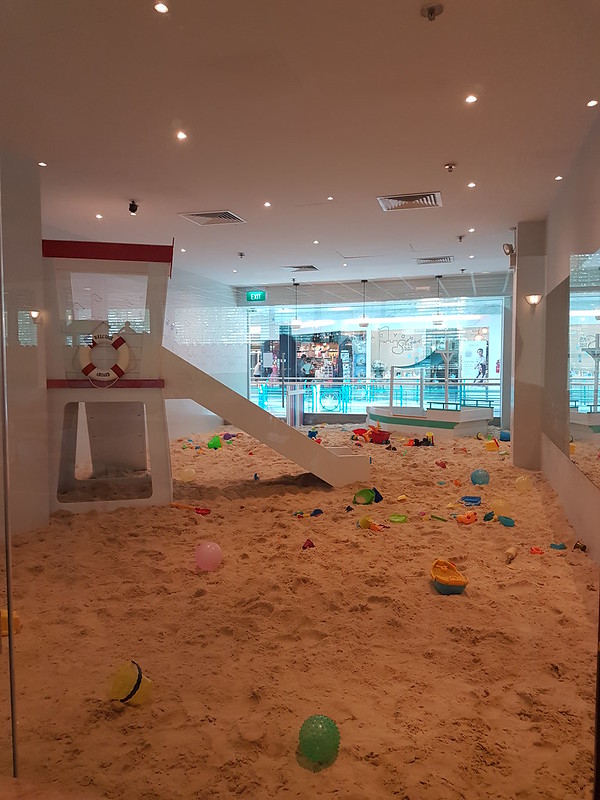 Sandy Dandy provides little jumpsuits to prevent sand from getting into clothes and diapers. There is no extra cost to use the jumpsuits and it is not compulsory to wear them either; it’s up to you! We put the jumpsuits on for them and led them in. The jumpsuits did keep a lot of sand out from their clothes! There are also brushes at the entrance to brush your feet with.
Our little minions treading the sand. 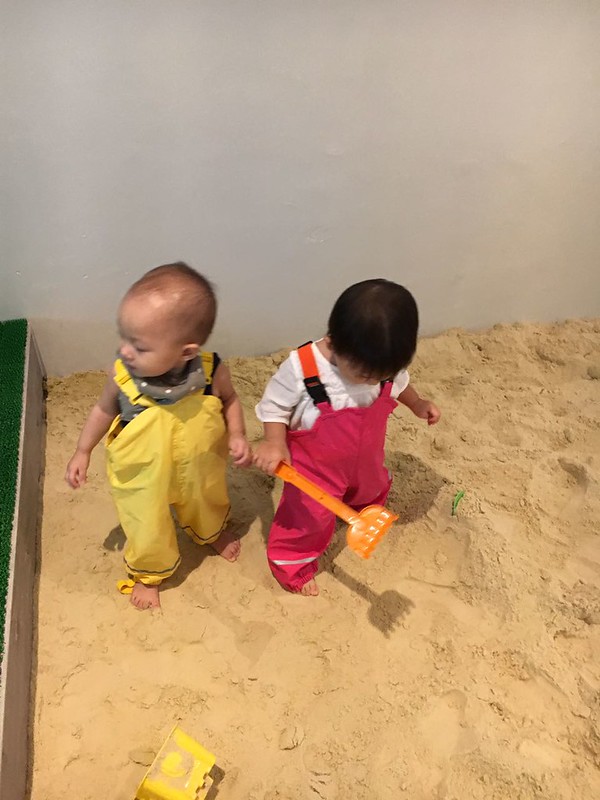 Matty, having had his confidence boosted by all his MyGym lessons, clambered up the steps all by himself! On a big-kid slide! 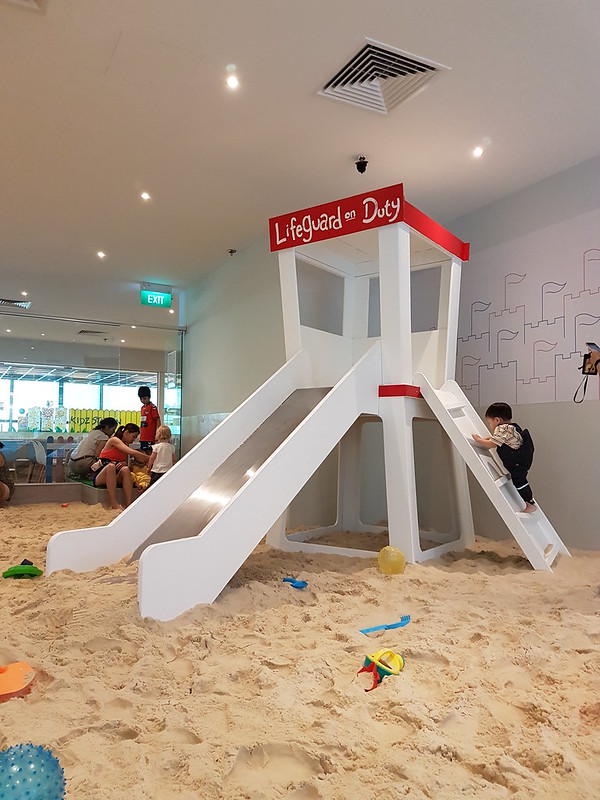 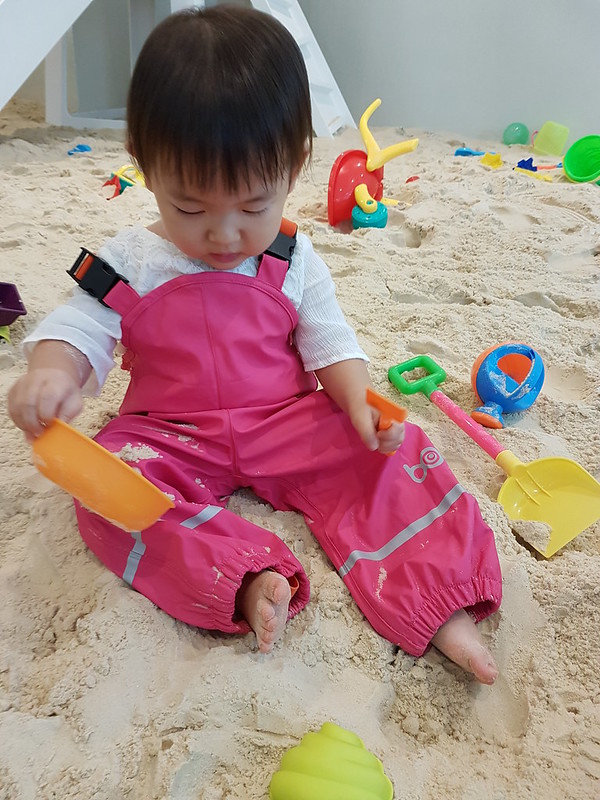 I’ve brought Elise to the beach a few times, but haven’t sat her down on the sand proper so this was her first time. She seemed to like it and used the tiniest shovel ever to fill up her mold. Yes, she ate sand as well. *shrugs* It’ll all come out I guess. 肮脏吃，肮脏大. The last I read, sand has anti-bacterial qualities… Sand play is a great sensory experience for young children. Instead of hard ground, they get to feel the softness of sand beneath their feet. 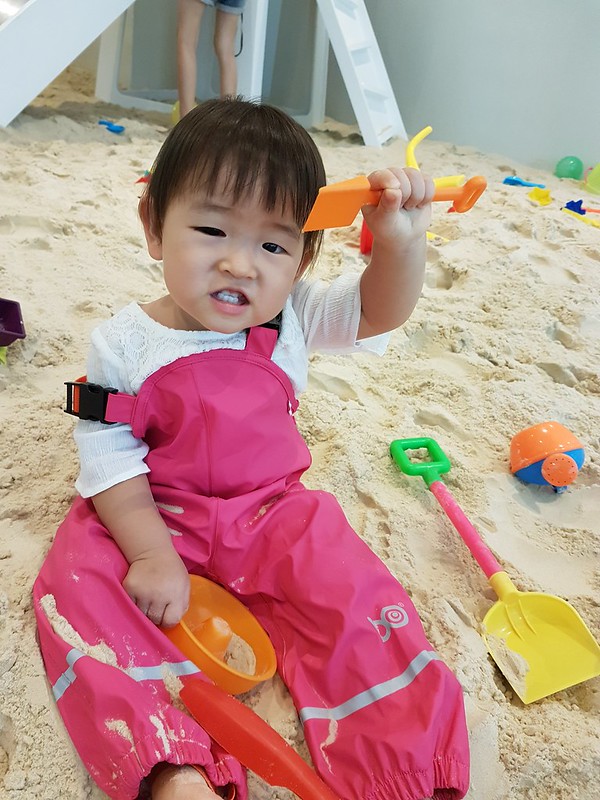 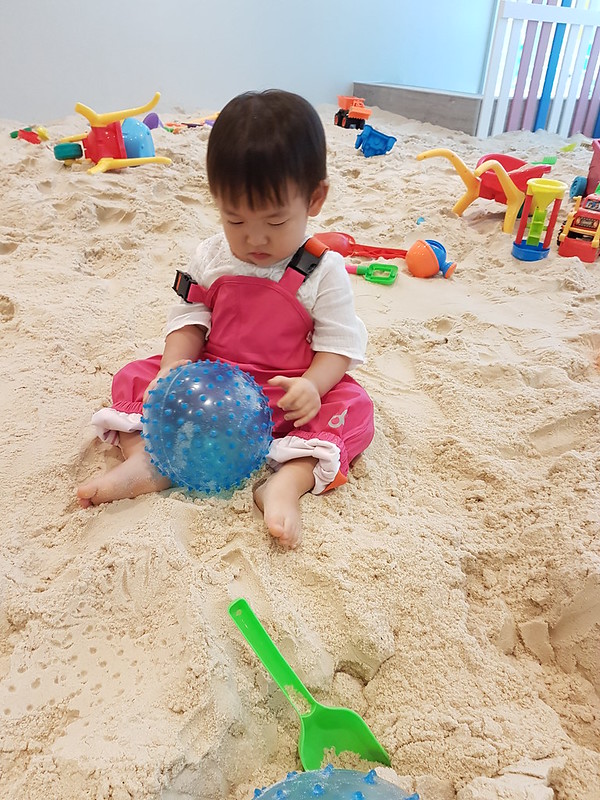 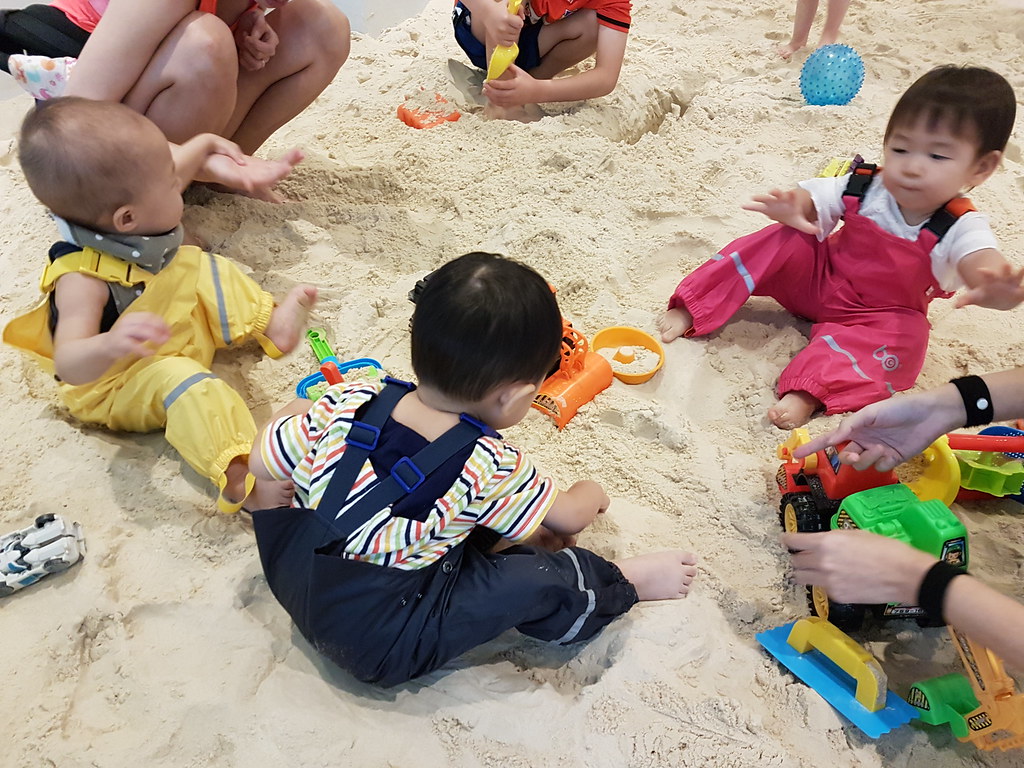 It was a great play date and new experience for the kids.  There is unlimited playtime on weekdays and it only costs $15.50 (kids below 24m) to let the kids use the facilities for the entire day. :O On weekends, playtime is limited to 2 hours. I see myself bringing Elise back again. I loved sitting in the sand and it was total heaven when the kids were captivated enough to play by themselves without bugging us. Best.

Sandy Dandy is giving away prizes of 5 play passes and 5 1-free-hour passes for weekend play to a total of 10 readers!

From now till 2nd May, just:

** Not a paid review. We all paid full price for the play session. All opinions are of my own.