Winter has already started in Korea but this is a recap of our trip there in September. That day, we went sightseeing at Chinatown in Incheon which was a total tourist trap and unmemorable. There are rows and rows of shops selling cheap, useless trinkets and majestic looking Chinese restaurants which serve mediocre Korean-Chinese food. To give an idea of how we got ripped off, we paid 50,000 won for 2 people for an “8 course set lunch” which didn’t fill our stomachs.

I also twisted my ankle. Nothing but bad memories. Despite the pain, I insisted on going to Songdo Central Park because it’s where the triplets Daehan, Minguk and Manse from Superman Returns live at. They’re all grown up and not-so-cute anymore, but my husband also wanted to check the place out.

Songdo is built on reclaimed land and is touted as one of Korea’s “smart cities”. It’s a business district as well and there’re quite a number of foreigners residing there. Right smack in the middle is a hanok village hotel which we were unable to access. There are many such hanok villages in Korea which have yet to be demolished (unlike in Singapore where old residential buildings are marked for SERS or flattened to make way for redundant expressways or underground train stations). 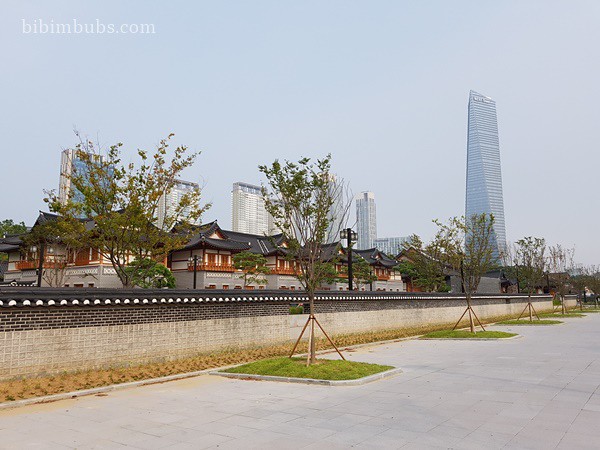 There were bicycles for rent. We were with Elise so we decided to rent one of these family bicycles (10,000 won for 30 minutes). 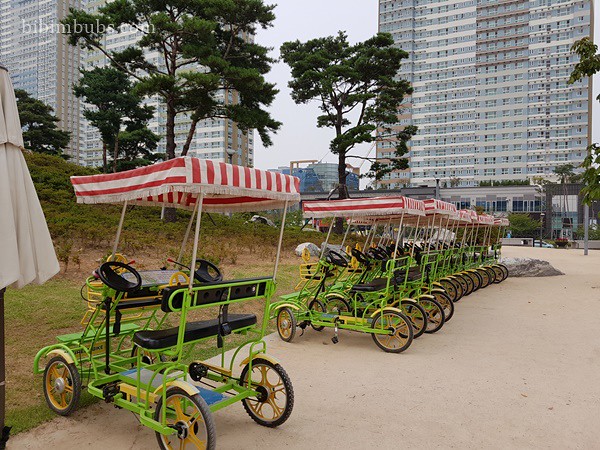 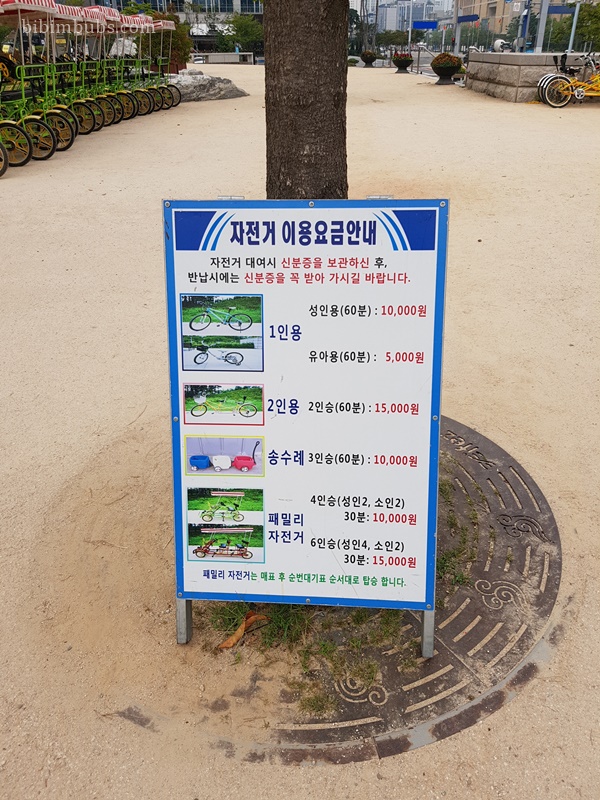 Our very experienced bike driver, preparing to take us around the park.

She was so experienced, she didn’t even need to steer with her hands. I mean, what could go wrong? This little lady had it all under control. The family bicycle requires quite a bit of legwork so both adults have to cycle and while there are three steering wheels, only one is working.

There’s a little river with kayaks, canoes and paddle boats for rent, but we didn’t manage to take them. The river reminds me of Clarke Quay, and my husband also agreed that both places have a lot in common. Since Songdo is newer than Clarke Quay… copycat, kiss the rat, go home let your mother slap -_- I wonder who came up with that nonsensical chant. 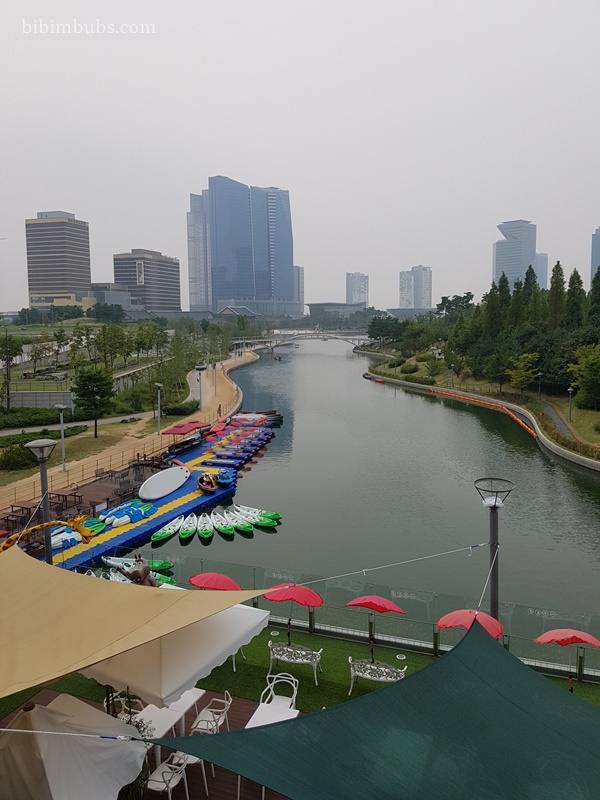 We hung out on the top floor of a cafe for a while doing nothing, enjoying the scenery. 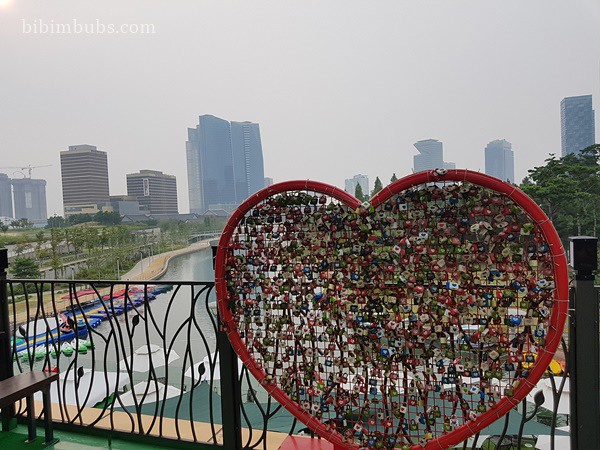 As dusk fell, we did a bit of shopping at the nearby Lotte Mart. My husband couldn’t control himself and bought 1 large carton of grapes because they were on sale. They were very tasty but we lugged them back on public transport. We had dinner at the food court. In Korea, you purchase your meal from a main counter and receive a buzzer to collect your meal from the respective stalls. 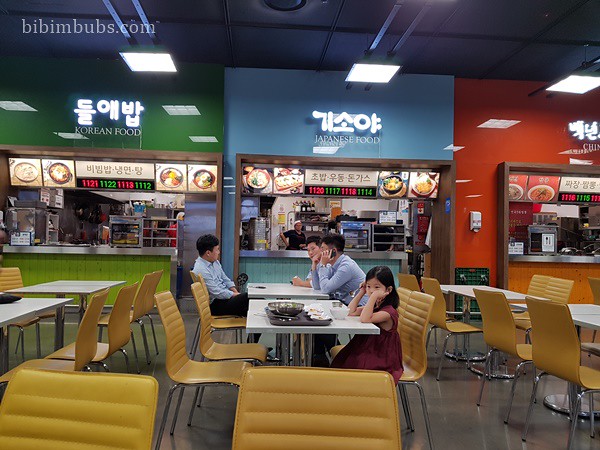 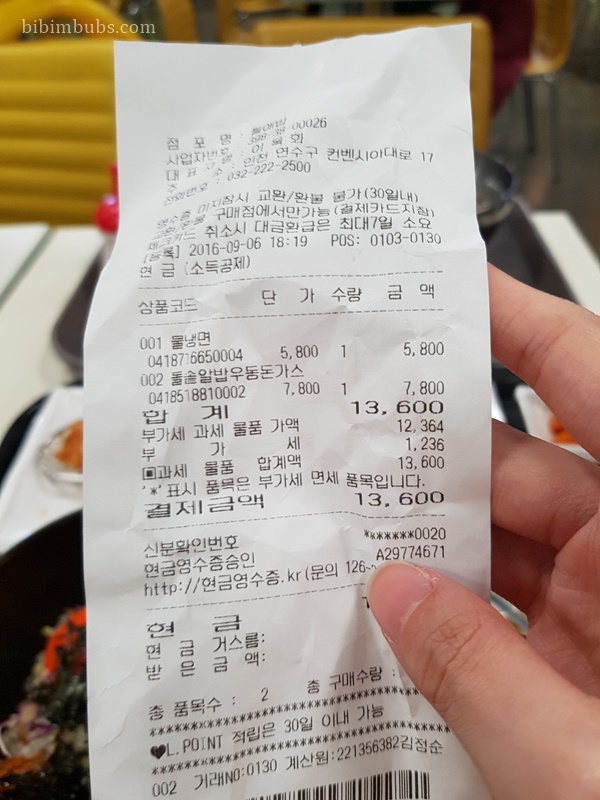 My dinner was this tonkatsu set which came with chiraishi don and hot udon. The entire set cost S$9 and was chock full of ingredients.

After dinner, we strolled around the park and took the subway home. There was another building which reminded me of the Artscience Museum at MBS. The building hosts plays and performances. Overall, I enjoyed that day because it was relatively quiet and we were away from the crowd. It’s quite a distance from Seoul station, so I’m not sure if it’s worth the visit specially for this place. 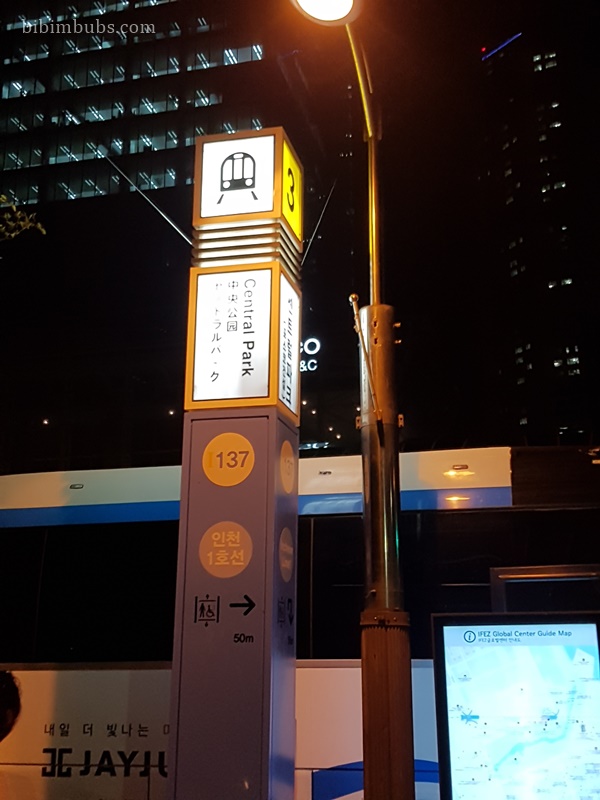 No comments yet
korea koreasummer2016 travel