Babies make all sorts of faces. I could stare at her face forever. 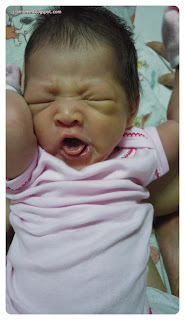 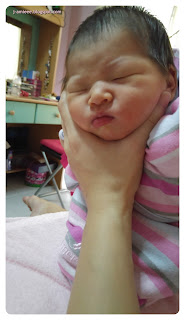 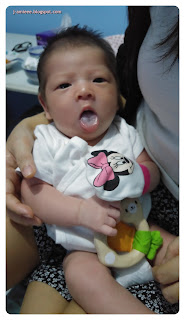 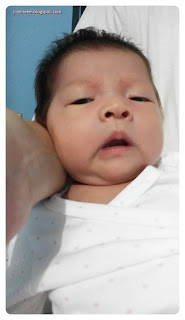 And a cute photo to compensate for the goofiness! 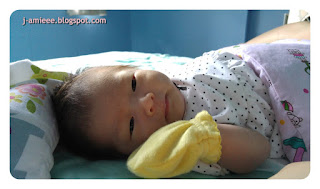 In other news, I latched her in the train today under a nursing cape! We were on the way home after attending a focus group on breastfeeding in public. The focus group was about increasing the acceptance of breastfeeding in public.
In these 3 weeks, I’ve nursed at the polyclinic twice, once in a moving taxi and today in the train, all under a nursing cape. Luckily, I haven’t had a negative experience yet. People generally don’t bat an eye if the mother is sufficiently covered up. I am all for breastfeeding in public, but I don’t want to see any other nipple when I’m outside.
I feel that breastfeeding is so natural, there isn’t a need to specifically campaign for women to nurse in public. That’s why I am quite turned off by events such as the Mass Latch On, where women specially gather to breastfeed together. It should be as natural as eating. It IS mealtime for babies. If the mother and baby don’t make a huge fuss about it, then other people shouldn’t either.
Mothers should definitely not have to latch or pump in the TOILET. I can foresee myself getting into a huge argument if someone ever asks me to go to the toilet to feed my child.

In other (other) news, I’m impressed by the nursing rooms at Causeway Point! The doors are locked and can only be opened by magic – you press the intercom button and security lets you in. It prevents the room from being abused by frisky couples as well as random people who use the water dispensers to fill up their bottles.

No comments yet
breastfeeding